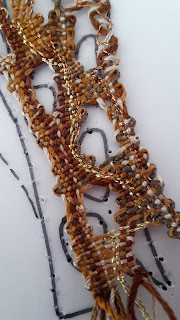 I have finally finished the piece of bobbin lace based on earth for the fan series I’m working on inspired by the four elements. I’m pleased with the colour combination and putting it together with the lace for the other two I’ve recently finished (air and fire) they work well together. I made the water fan a while ago for an exhibition in Valtopina, Italy and I want to make the other three in the same way so they form a group. For that fan I embedded the lace in silk paper and used a simple wire frame to make the fan shape so I’ll do the same with these. I’ve been looking through my silk fibres to see what colours I have and I think I’ve got the right colours for earth and air but I may have to dye some for the fire fan. I also need to make the wire shapes to attach them to. Perhaps my excitement on finishing the lace was misplaced I still seem to have quite a lot to do for this project!
Posted by Carol Q at 14:05 No comments: 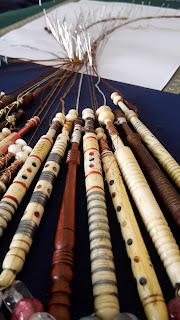 The beginning of the autumn and the return to school is always an exciting time as it heralds the beginning of a new academic year and new projects. I have to admit I’m still finishing one of my lockdown projects – the series of bobbin lace fans inspired by the four elements but I’m half way through the lace for the last one based on earth so I feel I’m getting on well with it. I also have a couple of new lace projects underway, one inspired by the research trip to Japan I went on last year with other members of the UCA textile department, and another which is an extension of my lace doily work on subversive domestic lace. The Japanese work is interesting because we are all making work expressing our impressions of Japan and it will be shown in two parts, one is made up of miniature work and the other comprises larger pieces. Most excitingly, for the miniature exhibition we will be joined by many of the Japanese artists and masters we visited in Japan who are also generously contributing miniature works so it will be an Anglo-Japanese exhibition. The exhibitions are entitled Tansa – the Japanese word for exploration – and the miniatures exhibition will be shown at the Craft Study Centre in Farnham and Gallery Gallery in Kyoto (dates are given on my website www.carolquarini.com). I’m also busy writing two papers about different machine lace designers so I have plenty of new projects to start the autumn!
Posted by Carol Q at 01:28 No comments: 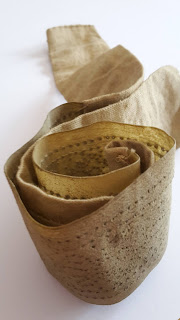 This antique bobbin lace pattern, or pricking, probably dates from the nineteenth century. It is a simple narrow insertion with a footside on each edge and a simple pattern of flowers and leaves running down the centre and would have been made using a Bedfordshire style of lace with plaits linking the different elements of the pattern, rather than the net ground used in Buckinghamshire lace. We now tend to use cardboard for our prickings but this one is made of parchment which suggests it is quite old. It is very sturdy and was made to be used many times, over and over again. The pattern is pricked before the lace is begun using a pointed pricker tool, often using a previous pricking as the template by pricking through it onto the new parchment. 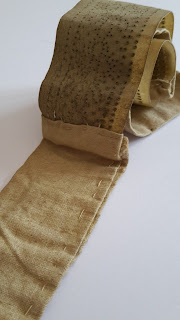 The cloth attached to the ends would have made it easier to handle the pattern without making it greasy from too much handling and was the point at which the pattern was attach to the lace pillow. Thomas Wright in The romance of the lace pillow says that most parchments were about 14 inches long (this one is about 10 inches) and each was called a ‘down’. Thus the lacemaker would say she had made a down when she finished the length of the pattern. He also says that the linen ends were called ‘eaches’ which means an extension. Variations on the spelling are eche, eke and etch and the term is linked to the phrase ‘to eke something out’ meaning to extend it to make it last longer. 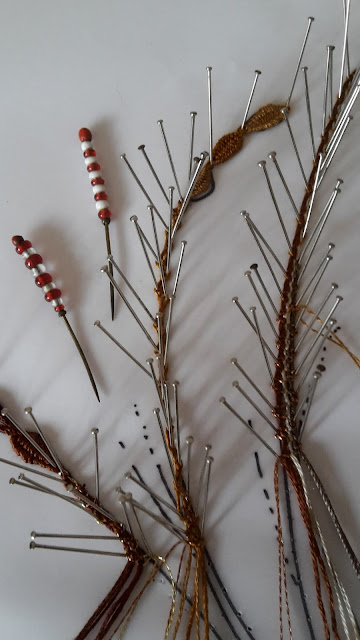 Pins play an important role in bobbin lace, they are the temporary structure around which the lace is produced but some special pins have other functions. The two pins in the image are called strivers. They are made from two brass pins and could only be made because the heads of these nineteenth century pins could easily be removed. One pin was threaded with beads and also had its head replace with a bead. It was then attached to the head of another pin. These strivers were used in the Midlands lace counties of England to see how quickly a strip of lace could be produced. T L Huetson in his book ‘Lace and bobbins’ says the striver was inserted ‘in the hole in the parchment pattern’ and the lacemaker then checked how long it took until she had ‘worked out all the other pins and come to the striver again’. This sounds a bit hit and miss to me though because first of all it depends how many pins you have and also when I work a lace pattern I don’t take the pins out in a set order but just remove them randomly from the back when I need one! Using the striver in the footside would be a more accurate point to measure from as it couldn’t be removed until a certain number of pattern repeats had been made and the lace was secure. Actually using the striver in the lace, rather than just pinning it next to the pattern, would have meant it couldn’t be moved easily so it would be difficult to cheat! Using strivers would certainly have been a useful way to incentivise children learning to make lace and encourage them to compete with their peers to be the quickest in the class. I also think that English lacemakers liked to brighten up their lace pillows, for example with colourful spangles and interesting bobbins, and this was another way of doing that.
Posted by Carol Q at 06:43 No comments: