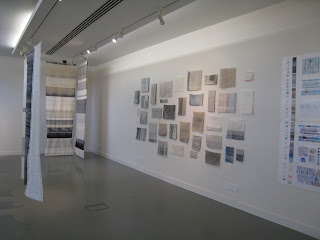 This exhibition of weaving by Ismini Samanidou at the Crafts Study centre contains some beautiful pieces. She is interested in observing time and place, and her recent work seems to involve taking photos to record fragments of places such as crumbling walls, peeling paint and clouds and then reconstructing the surfaces on woven textiles. For students of weaving there is a wealth of information here: there are mood boards, photos, work in progress and numerous samples showing how she works and where her inspiration comes from. However, I was just impressed by the beauty of the hangings. My favourite was Momijigari, a piece she made in response to visiting the maple tree gardens in Kyoto. There were so many layers and shadows and hints of trees and leaves held within it that it seemed to have captured the essence of the trees themselves – just beautiful.

Cloth and memory: The theme 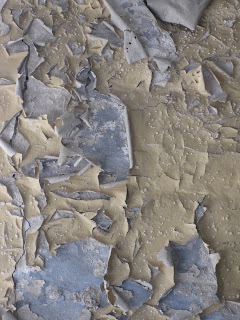 The Cloth and Memory exhibition opened at Salts Mill on Saturday and runs until 27 August. Now it is all up and open I thought I’d write about the theme behind my installation, which explores the process by which memories are embedded into cloth and the fabric of a building.

When I came to Salts Mill for my first research visit I was struck by the atmosphere in this room and the layers of peeling paint whispering of hidden stories embed in the fabric of the walls. The large windows are the main feature of the room and when I first came here they showed a gradual progression of being blocked up, which suggested the idea that the room was gradually closing in on itself and its memories. 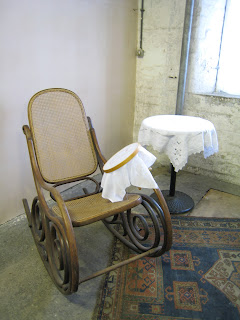 So I imagined a young woman sitting in the corner sewing and the installation starts in the corner with her chair and embroidery frame suggesting she has just left the room. But when we look at the curtains behind we see that they are pierced by pins and needles in the traditional tally pattern of counting units of five. This contrasts with our idea of the contented seamstress because these marks also suggest a prisoner marking time, while the misuse of sewing equipment suggests a subversion of the domestic. 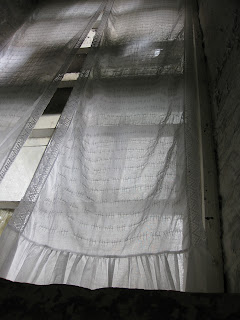 At the second window is a similar net curtain but the ends of this one seem to be gradually solidifying and turning into stiff board. The curtain has lost its airy transparent nature and is becoming hard and opaque. In the third window we see the next stage of the process - the net curtain is being absorbed into the cardboard and the tally marks are metamorphosing into chalk marks on board. The succeeding windows show the card being gradually turned into brick and the tally marks seeping into the walls until by the sixth window they disappear completely, suggesting the windows are insidiously becoming blocked up as cloth turns to stone, sanctuary becomes prison, and memories become part of the fabric of the room. 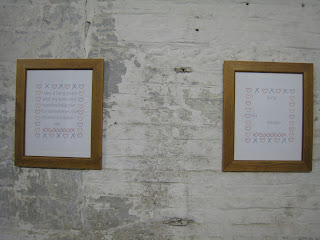 Are we just witnessing the embedding of memories over time? Perhaps not - the cross stitch samplers between the windows reveal the thoughts of the trapped embroiderer. The full text of the sampler reads: ‘I sew a long seam and my pins and needles help me for sometimes the thread escapes me’ but when parts of it are removed we find hidden messages within the main text saying ‘help me’ and ‘I long for escape’. 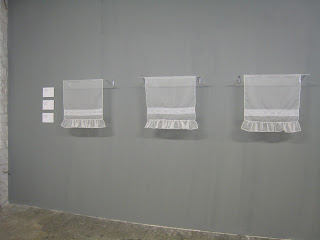 Beside the ‘windows’ hang three small net curtains, embellished with tambour lace trims that include the ambiguous phrases, ‘I never laid a finger on her’ ‘I can see through you’ and ‘Appearances can be deceptive’. They are all phrases that could be used to describe any net curtain, none of them have fingers, they can be seen through and they mask appearances. But here the curtains seem to be discussing a situation suggesting that they have agency and are playing an active role in the events of the room.

Photographic images of those three curtains, taken in sites within Salts Mill, seem to confirm this. We see the curtains trying to hide the evidence, obscuring the view and showing that appearances can be deceptive.

So rather than revealing the gradual solidification of memory with the passage of time we seem to be witnessing its gradual erasure and destruction of the evidence.

Further images of the curtain pierced with pins and needles reflect the claustrophobia of living behind bars however small and feminine they may be. And show that the scars remain even when the illusion of freedom is attained and the thread that binds is loosened.

So although something is trying to erase the memories in the room and destroy the evidence we are left with the idea that memories do remain embedded in cloth whatever the attempts to eliminate them.

Cloth and memory: Setting up

We’ve spent this week setting up the Cloth and memory exhibition. Everyone at Salts Mill has been extremely helpful and although it’s been tiring it has also been fun. It’s great to see everything in place at last because with such a large installation you never really know whether it is all going to work as a whole until you see it in place at the venue.

I tried as much as possible to get everything ready in my studio and pack it into units that were fairly easy to transport and were ready to be installed at the site. With the invaluable help of Gail Baxter (who also took these photos) and Dave at Salts Mill we managed to hang 4 long curtains (over 3 metres each) pierced with pins and needles, and 3 small curtains with tambour lace on them. We also attached 4 big pieces of cardboard with pins or tallies on them to the wall. We also hung 4 samplers and 9 large photographs (1 metre by 66 cm each) and installed a DVD. The only thing I had to do at the site was to mark some of the bricks with tallies – which I could only do in situ.

I’m pleased with the way it has all come together and I’m looking forward to the official opening tomorrow. The exhibition runs until 27 August and also features the work of Beverly Ayling-Smith and Bob White. 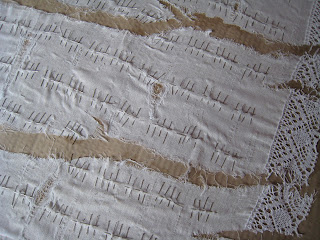 The idea behind my installation for the Cloth and memory exhibition, to be held at Salts Mill over the summer, is that the windows are gradually being blocked up trapping the inhabitant of the room. So each window has to show a progression from the one before it. When I first saw the room my work is being exhibited in, the third window was blocked up by thick card so I decided to use cardboard as a backing for that window. Therefore the first window has a net curtain hanging at it, the second window has a net curtain with card backing behind the lower half suggesting it is being turned to stone and the third window is mainly cardboard with the remains of the curtain on it as you can see here. 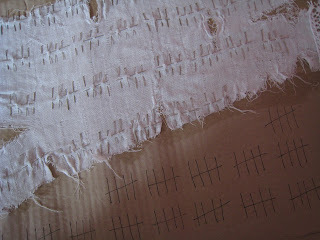 I started by applying the cloth to the cardboard but realised that the join between the two had to be more subtle and suggest that the cloth was becoming part of the fabric of the building. I then set about distressing the cloth with scissors and a blade – not as easy as you might think because the pins kept pinging out of the cloth and I had to keep searching for them, then finding where they’d come from and replacing them. When I thought the cloth was distressed enough I glued it to the card and then added some tallies to the bare card to fill the remainder of the window. The idea being that the tallies metamorphose from pins to marks on the card, then to marks on the bricks of the building, and finally in the last window they disappear completely as they have been absorbed into the fabric of the building.