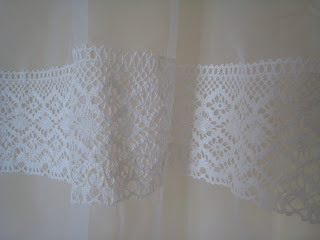 In the final part of my research and the accompanying exhibition the net curtain becomes complicit in the dysfunctional home by enlarging and acting anthropomorphically. The cloth seeping from walls, doorways and windows (below) suggests that the net curtain is an unstoppable force and the disquieting memories of the home cannot be stifled or concealed. 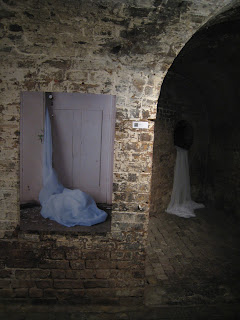 As part of this section I also considered the potential of darkness to aid complicity in the home by helping to obfuscate meaning and memory. The image at the head of this post comes from the series on darkness, which consists of three lace-trimmed net curtains in a room with timed periods of light and darkness. The lace is overlaid with embroidery in luminous thread which reveals its message, not in the light but in the dark, showing that darkness can be more illuminating than daylight. 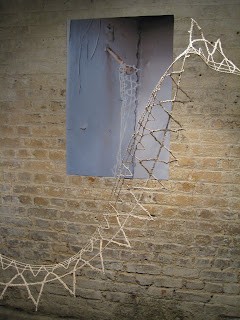 My oversized ninepin lace is also part of this chapter. It represents the idea of the net curtain and its lace trim expanding into the house and snaking through it on a dangerous path of destruction. Together these aspects of the net curtain reflect Freud’s ideas about the uncanny home, tempered by the work of Antony Vidler who built on Freud’s work to suggest that the home becomes complicit in its change from homely to unhomely.
Posted by Carol Q at 03:59 No comments: 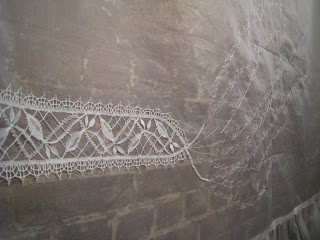 Silent witness is the third part of my research into the domestic veil. In this section the net curtain traps not only light but also the secrets, whispers and memories of the home in its role as silent witness. It also records the domestic decay of the home as it accumulates the dust and dirt of dysfunctional domesticity. 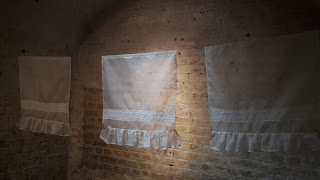 The net curtain sifts and sorts phrases it has overheard in the home, many of which are ambiguous and speak of hidden agendas, obfuscation, evasion and veiled aggression, leaving an echo of forgotten conversations, unfulfilled hopes, and shattered dreams. Examples of this include ‘Whisperings’ which shows a traditional style bobbin lace trim on the curtain unravelling to reveal the trapped whispers it has overheard and the series of curtains with trapped whispers in tambour lace, both shown above. 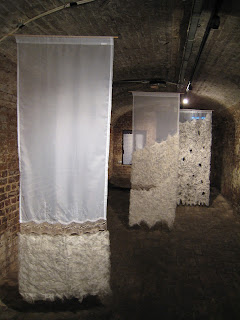 The net curtain also traps dust, which, as well as being a repository of memories, is a physical manifestation of the decay of the home and its inhabitants. Here, in a series of three hangings, the dust is silting up the curtains and their lace trim, turning the fluid fabric into thin brittle paper, representing the disintegration of the home. The final blog about the exhibition, later this week, will reveal the curtain expanding and overwhelming the dysfunctional home.
Posted by Carol Q at 02:58 No comments: 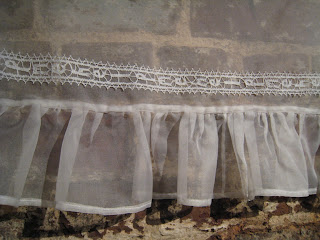 The second series of practice in my ‘Domestic veil’ exhibition, looking at the theme of women trapped in the home in mid-nineteenth-century gothic novels, uses the idea that the trapped heroine’s only means of communication is through her needlework skills. So rather than just marking her imprisonment by tallying the days using her pins and needles, as she did in the ‘sanctuary and prison’ section, she is now actively communicating to the outside world using the net curtain as her canvas. However she is using coded communication to disguise her messages. She uses bobbin lace in the net curtain pictured above to embed the words ‘help me’ within her lace. 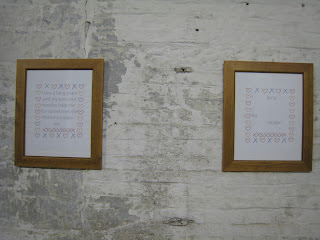 I also produced a ‘virtual’ sampler using the Illustrator computer program rather than actual stitching to highlight the heroine’s plight. The full text of the sampler reads ‘I sew a long seam and my pins and needles help me for sometimes the thread escapes me’ but the layers of text fade in and out to reveal the hidden phrases ‘help me’ and ‘I long for escape’ reflecting the concealed thoughts of the seamstress. 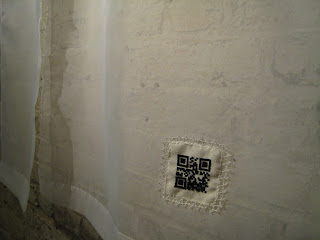 In other pieces, such as 'I warned you' shown above, I have used interactive cross stitched QR codes to hide hidden messages. These can be read by the app on a smartphone to reveal their hidden words and suggest that all is not harmonious in the domestic environment veiled by the net curtain. So far the net curtain has been used as a surface for coded communication of the inhabitants of the home but in the next chapter ‘Silent witness’ it starts recording what it hears in the home.
Posted by Carol Q at 03:15 2 comments: 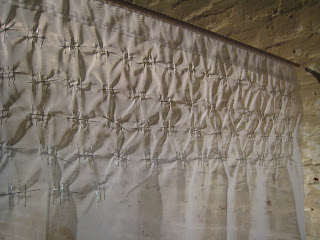 In the first part of my research I consider the domestic duality of sanctuary and prison by piercing the net curtains with pins and needles in the tally marks prisoners use for counting time. This alludes to a prisoner marking time, but the misuse of feminine sewing equipment suggests a subversion of the domestic. It reflects the claustrophobia of living behind bars, however small and feminine they might be, and the longing for escape from the conventions of the day. 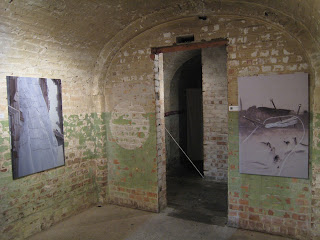 I linked the curtains to large photographs showing the curtain escaping from broken windows, reflecting the desire for escape but showing that the scars remain. Images of the pins and needles linked to thread reflect the idea of the seamstress being tied to the home, in its dual aspect of sanctuary and prison, and how even when these ties are broken, a binding thread remains.
Posted by Carol Q at 03:44 No comments: 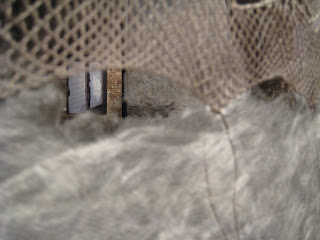 I realise that with all the excitement of my exhibition and viva I haven’t actually found any time to blog about the exhibition so I’ve decided to remedy that by blogging about it this week. The exhibition was the final exhibition for my PhD work so it was an opportunity to show the whole body of work in one place and it was great to see it all together and in such an evocative venue. Thanks to all of you who visited the exhibition, I was so pleased by the numbers of visitors and all the lovely comments. 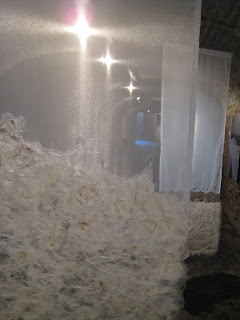 The basic idea behind my research considers the net curtain as a domestic veil and uses it as a metaphor for the home as a site of claustrophobia and confinement. Much of the work links to the gothic novels of nineteenth century writers, such as Anne and Charlotte Brontë, and reflects their ideas of women being trapped in the home as a result of social circumstances. The research also considers Freud’s concept of the uncanny, in which the homely shades into the unhomely. 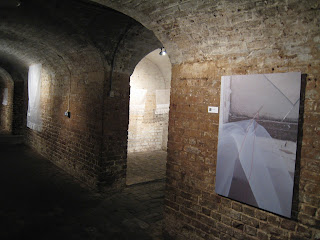 My research and practice build on these ideas and the work reflects ideas about home as sanctuary and prison, shows how the net curtain can reveal the unquiet voice of the heroine, as well as the whispers of the home, in its role as silent witness, and finally how it becomes complicit in this dysfunctional domesticity. These four themes each have distinct practice linked to them so I’ll blog about each of them separately over the next couple of weeks.
Posted by Carol Q at 02:33 2 comments: 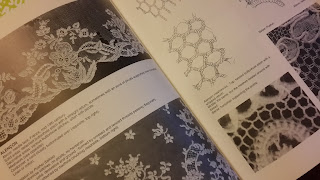 I’ve been trying to learn how to distinguish handmade and machine-made lace with the help of Pat Earnshaw’s very helpful book on the subject ‘How to recognise machine laces’. She notes that not only did machines imitate handmade lace they also imitated other machine laces so distinguishing them can be tricky. She gives some firm indications that a lace is machine made, such as the presence of vertical lines in the lace, and a zigzagging rather than a weaving effect in ‘cloth stitch’ areas. Her less firm indications include a line of picots attached to the lace rather than picots incorporated into the border, rigidly repetitive motifs and an inconsistent passage of threads between the design and the ground. She’s also very helpful at distinguishing between different types of machine-made lace and describes the different nets produced by different machines. There is a lot to learn!
Posted by Carol Q at 03:37 No comments: 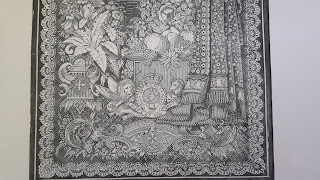 I’ve been doing some research into the lace curtain depicted on my print and have discovered that it was made by Thomas Adams & Co of Nottingham for the 1862 International Exhibition in London. Thomas Adams started manufacturing lace in 1830 but soon expanded, and by 1888 had a curtain factory in Turin and in 1914 warehouses in various European centres so was clearly one of the major UK manufacturers. The aim had been to hold the exhibition in 1861, ten years after the Great Exhibition of 1851, but unforeseen circumstances, including the death of Prince Albert, delayed its opening. Unfortunately the ‘Illustrated record of the International Exhibition of all nations in 1862’ is not very helpful on the subject of lace, despite it being a major UK export and employer. It mentions a few examples in the exhibition from London, Nottingham, Ireland, Belgium, France and India and concludes by patronizingly mentioning ‘the many admiring lady visitors who thronged to this, to them, deeply interesting department of the Exhibition’. I think my next step will be to find an accurate catalogue of the textile exhibits and go from there.
Posted by Carol Q at 02:18 No comments: