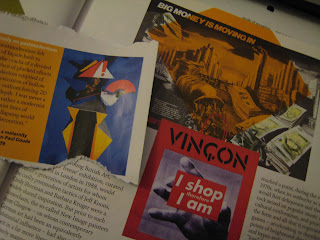 This exhibition at the V&A looks at postmodernism as it developed from 1970 to 1990. I had not realised that it owed its origins to architectural theory but the first part of the exhibition was devoted to architects and architectural models, mainly Italian. This section was summed up by Hans Hollein’s 1980 Façade for Strada Novissima, which comprises a series of full sized columns reprising the history of architecture, including one broken one hanging from the ceiling under which you have to walk to get to the following section.

The exhibition was extensive and as well as architecture included furniture, posters, clothing, jewellery and household items. Some of my favourites were Richard Notkin’s Double cooling tower teapot and Alessandro Mendini’s armchair painted in pointillist style by Paul Signac and Barbara Kruger’s ‘I shop therefore I am’ slogan on a carrier bag. Giulio Paolini’s 1984 L’altra figura made up of two identical ceramic busts on plinths staring at another bust shattered on the floor between them was also amusing and an interesting reflection on life.

Vivienne Westwood’s punk subversion of 1980s power dressing and Cinzia Ruggeri’s dress with the stepped ziggurat skirt entitled Homage to Levi Strauss were interesting reminders of the 1980s. Apparently Levi Strauss’s writing on bricolage was important for Postmodernism. I had thought bricolage was a general term to describe a means of assembling ideas but the definition in the exhibition was a ‘cut and paste assembly of existing elements by hand’.

The exhibition showed that postmodernism covered a wide range of media and ideas. It tended to be self consciously clever, amusing, ironic and inventive and to sample and appropriate ideas from many sources.