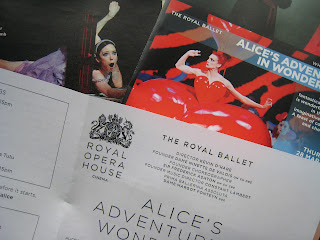 We saw the ballet Alice in Wonderland at the cinema on a live feed from The Royal Opera House yesterday. It was brilliant, especially the special effects. To be able to show Alice travelling down a rabbit hole and then growing larger and smaller on stage requires genius. The story was also cleverly retold to link Alice’s world to the characters she was to meet in the story and to introduce a romance, then to bring it all up to date at the end. My favourite part was Act 2 which included the Mad hatter’s tea party and the Cheshire cat. The cat was base on Tenniel’s original illustration and was made up of separate parts which at times moved very convincingly together in a cat-like way and at others spiralled madly apart. The Mad hatter was brilliantly danced by Steven McRae as a tap dancing, slightly menacing, neurotic character. Sarah Lamb was also excellent as Alice and made the role seem natural and easy although she was on stage for the entire time, performing a demanding role. I don’t have space to praise all the other dancers but the Queen of hearts, the caterpillar and the cook were all brilliantly portrayed as well. It was a wonderful evening and a great way of seeing an excellent production without having to travel to London. Tweets in the interval came from people seeing the ballet in Spain, Belgium, and Brazil and it was exciting to be part of that worldwide audience.