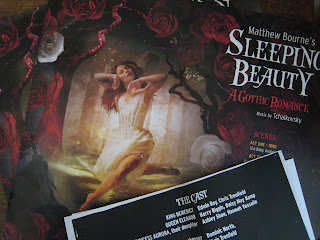 I finally saw Matthew Bourne’s gothic version of the Sleeping Beauty ballet on Saturday evening and it was definitely worth the wait. The idea of having gothic ‘fairies’ representing the ‘virtues’ of passion, rebirth, plenty, spirit and temperament was a clever twist on the original tale, especially as two of them were named Feral and Tantrum, and they were led by Count Lilac rather than the traditional Lilac fairy. The dual villain of Carabosse and her son Caradoc was also a touch of genius and allowed the male and female aspects of that menacing character to be explored. The puppet baby was very cleverly controlled and appeared to have a personality and mind of its own. And of course the vampire theme overcame the problem of the 100 year length of Aurora’s sleep. The costumes, scenery and dancing were all excellent and Tchaikovsky’s music was as beautiful as ever – it was a magical evening.