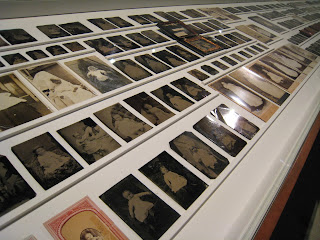 One of the installations I found interesting at the Venice Biennale was Linda Fregni Nagler’s uncanny series of photographs of The hidden mother (2006-13). These photographs depict mothers and children from the nineteenth and early twentieth century. However, the mothers are shrouded so they are visible but remain in the background of the picture like a curtain or piece of furniture. Their faces cannot be seen and the focus remains on the child. At that time photographs required a long exposure time and children who could not sit still for that length of time were held still on their mother’s lap, but because the mother only wanted a picture of the child she remained shrouded. Ironically rather than making the child the focus of the image, the uncanny shape of the mother in the background becomes the focus.