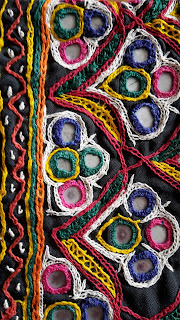 Shisha (glass) mirror work is unique to India. According to Anne Morrell’s book on Indian embroidery it is thought to have developed in Baluchistan or Gujarat and may originally have incorporated naturally occurring mica rather than mirrors. Blown glass is used now which is broken into pieces and then cut into shapes, most often circles. However in one of the examples I bought the ‘mirrors’ seem very flexible and more like cardboard than glass (see below). 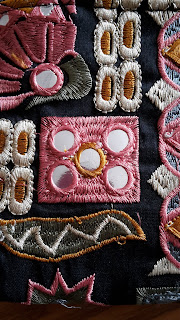 Anne describes the traditional technique for holding the mirrors in place with two vertical and two horizontal threads forming a cross across the face of the mirror. This cross forms the base for the top stitching which comprises buttonhole, herringbone, or chain stitch forming a circle round the edge of the mirror. It’s important to get the tension of the holding stitches just right as if they are too loose the mirror falls out and if they are too tight it’s difficult to work the circle of edge stitches. 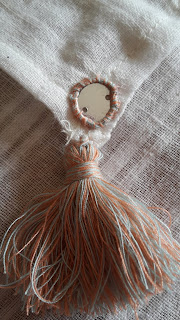 That’s the traditional technique, however at one of the women’s cooperatives we went to we were shown a different method. The embroiderer made a ring of thread round her finger, worked buttonhole stitch all the way round it to make a ring and then slip stitched it over a mirror on the base fabric which was held in place with stitches through holes in the mirror (see above). Embroiderers, particularly those working for a living, will always use faster ways to produce the desired result if they can, because time is money. Whatever the method and the materials used it is a beautiful technique that is unique to India.