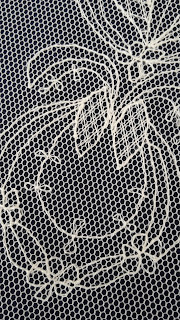 More progress has been made on my lace mats based on research into early twentieth century women who had to leave work on marriage. In the end I decided to embroider the text using couching so the four mats each have a phrase from the marriage ceremony: ‘for better; for worse; for richer; for poorer’ embroidered across them. I bottled out of using a marker pen for the writing because although it seemed to disappear quite effectively when I ironed it on my sample I was worried, probably unjustly, that it might not work properly on the final mat so I wrote the text on paper in indelible ink and used that as a pattern under the fabric. I also had to make some decisions about attaching the lace to the mat. 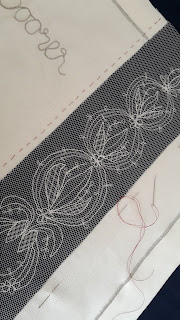 The lace represents the creative work of Amy Atkin and women like her and I wanted to show how easy it was to strip that work and life away. My initial thought was to use pins. I like the sharp piercing nature of pins and their hint of veiled aggression, which seemed to match with the subject, but I decided that it would be difficult to send the pieces to exhibitions like that as they might come loose or even injure someone! I therefore decided to tack the lace in place instead. I wanted the tacking to be obvious though, so I decided to use a red thread, which is often used to symbolise women. I think the red thread works well and I can always add a line of pins as well if I’m exhibiting the work myself.