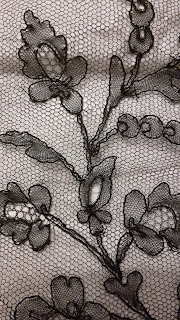 I bought this lovely sample of Chantilly lace in Bruges last year. Chantilly is one of my favourite laces because of its delicate shading and the way it looks when it’s worn against the skin, for example as a veil. Santina Levey notes that the Chantilly lacemakers originally made blonde lace, usually in white or cream thread, but because of changes in fashion they began making black lace in the 1840s using grenadine, a non-shiny silk thread. Chantilly lace uses a light twisted Lille ground for the net, while the motifs in the design are worked in half stitch and outlined in a heavier gimp thread. 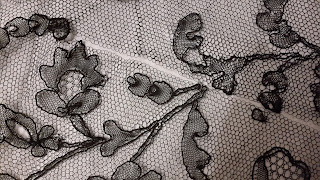 Any bobbin lace is time consuming to make, and Chantilly is no exception. For larger pieces such as veils and shawls, which were fashionable in the mid to late nineteenth century, several lacemakers worked strips of the lace that were later joined together using invisible stitching called point de raccroc. Unfortunately this line of sewing is also a weak point that sometimes comes undone showing where the strips of lace were joined (see above). Although my sample is coming apart, I found it interesting to see the way in which the strips had been divided so that the join interfered as little as possible with the main parts of the design.