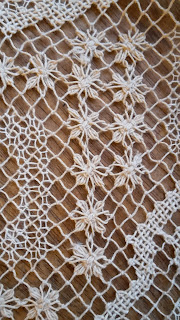 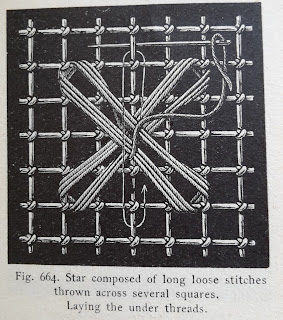 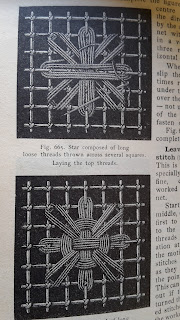 Another Battle of Britain lace panel 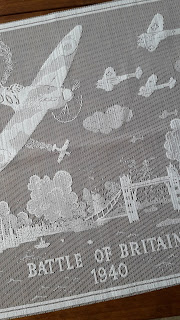 I’ve just been given a Battle of Britain lace panel – not the original one made in the 1940s but one made to celebrate the 50th anniversary of the battle. They are both machine made lace, the original was made by Dobson and Browne on a Nottingham curtain machine and this one was made by the Cluny Lace Company on a raschel lace curtain machine. Having made my own lace panels based on the original design by Harry Cross I was interested to see which aspects this designer focussed on. He or she has included a dog fight in the sky which also takes up the centre of the original panel and from a design point of view I particularly like the spiral the stricken German aircraft is making as it falls through the sky. Interestingly though this designer has made Tower Bridge the focus of the London skyline whereas Harry Cross focussed on the iconic image of St Paul’s cathedral against the burning skyline. The eight scenes of bomb damage that Harry Cross depicts in his original lace panel were all from the north bank of the Thames, mainly from the city of London, while the image on the smaller panel shows smoke on both the north and south banks of the river; both in their own way highlighting the extent of the bomb damage. I’m delighted with my gift and it’s interesting to see another lace panel celebrating the Battle of Britain from a different point of view.
Posted by Carol Q at 09:22 No comments: 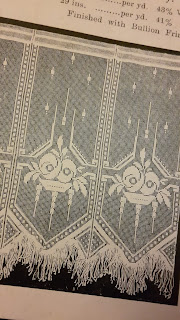 I found these interesting lace curtains in a 1933 lace furnishing catalogue. They seem to be sectional store curtains, which are a clever idea as they are designed so that the householder can cut between the panels without any threads fraying to make them the width she requires. However, the catalogue also suggests that these ones can also be used as blinds or cut up individually and used as antimacassars or head rests over the back of a chair. You would have to choose the correct depth if you wanted head rests though as they come in sizes ranging from 21 to 73 inches! Each section is 9 inches wide and they all have a fluted heading and bullion fringing. They are made in cotton or artificial silk thread and the householder can choose between biscuit or ivory shades. Unfortunately no prices are provided for any of the curtains in the catalogue.
Posted by Carol Q at 09:36 No comments: 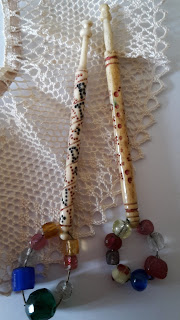 Although these two lace bobbins are made by different makers they could have been designed as a complementary pair. The simpler one is inscribed with ‘Love me truly’ and the one with the spiral inscription gives the reassuring response ‘I love you my dear that is true’. I think that the plainer bobbin was probably made by Arthur Wright of Cranfield, who produced most of his bobbins during the 1870s. His bobbins tend to include quite simple messages inscribed in crude letters which are always coloured red. The bobbin with the spiral inscription is probably the work of Jesse Compton who was working much earlier in the nineteenth century, mainly in the 1830s and 1840s. His bobbins tend to be quite slender, probably because the bobbin lace being made at that time was very fine and required a large number of bobbins on the pillow. The letters on the bobbin are neat and alternately coloured red and blue which are both features of his work. Sadly then these two bobbins were not part of a dialogue between a lacemaker and her lover but they do show that lacemakers were looking for true love throughout the nineteenth century.
Posted by Carol Q at 11:18 No comments: 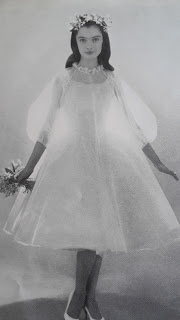 I recently bought a leaflet about machine laces from the 1960s and was interested to find out more about bobbin net. Plain nets are produced in many different mesh styles and finishes and can be made in cotton, silk or nylon. This makes net a versatile fabric which can be fine and diaphanous for something like a bridal veil or firm and crisp for a stiff petticoat. I love the image that accompanies the article showing a nylon net bridal outfit by Duprez et Cie of London (see image above). I knew that bobbin nets were often embroidered and in fact the early machine laces were all made this way before the development of the jacquard patterning system, but I knew less about fancy nets. I have now discovered three different types of fancy bobbin nets. Point d’esprit is a spot net made by basically making regular filled single holes in the fabric. Flock printed bobbin net is made by printing a design onto plain net using a lacquer rather a textile dye then blowing a powdery substance, known as flock, which is made up of particles of acetate over the surface. When the lacquer has dried the excess flock is blown away leaving the pattern as a raised velvety pile on the surface of the net. The third type are known as jewel nets and are made in the same way as flock nets but metallic particles are blown on to the lacquer instead of flock. The article reports that silver and gold patterns are very effective on black net but sadly provides no images.
Posted by Carol Q at 11:54 No comments: 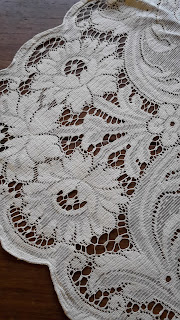 As part of my research into machine made lace I’ve recently been reading about the history of the Simon May lace company, which was based in Nottingham but had many branches worldwide. I was surprised to discover that their napery department, a general term for table linen of all types, was only inaugurated in 1920. This surprised me as tablecloths were made using the Nottingham lace curtain machine and I assumed curtains and tablecloths would have been part of the same department. I also knew Simon May had been producing curtains since the middle of the nineteenth century. However, further reading about this napery department showed that it produced dinner and luncheon sets, tea cloths, runners, and dressing table sets with lace insertions, edgings or embroidery. So it seems that in this department they were making motifs and edgings rather than tablecloths. This section of the book is also illustrated with a photograph of a lace tablecloth so it wasn’t just me who was confused! Another interesting image accompanying the article shows rows of women working at what look like sewing machines presumably making up the table mats. Subsequent reading revealed that tablecloths and mats were indeed made in the curtain department but the ones requiring hand finishing were made in the napery section – puzzle solved!
Posted by Carol Q at 10:38 No comments: 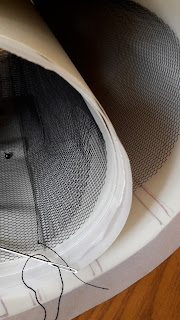 I’m still working on my lace for the ‘Tansa: Japanese threads of influence’ exhibitions. My pieces are inspired by Japanese textiles and gardens and the sensibility of shin-gyo-so – broadly expressed as ‘the realistic, the impressionistic and the abstract’. The abstract piece is a small three-dimensional bobbin lace sculpture but the other two pieces are black net hand embellished with black thread. Both of these two pieces are hangings, one based on kimono cloth and the other on wrapping cloth. I’ve used this needle run technique before but previously I used white thread and net so I’ve had to make a few adjustments this time. For example, previously I’ve outlined the elements of my underlying pattern in thick black permanent pen but that is very confusing with black thread so this time I’ve outlined everything in red, which shows through the black net much more successfully. Also the black thread shows up more effectively on the black net than the white on white version so I’m adding some net overlays to soften the effect. Both interesting effects that I’ve only realised by actually working with the materials. All three pieces will be exhibited next year in the UK and Japan. The first venue for the lace sculpture is the Crafts Study Centre, Farnham from 4 January to 19 February and the lace hangings will be at South Hill Park, Bracknell from 23 February to 3 April.
Posted by Carol Q at 11:36 No comments: