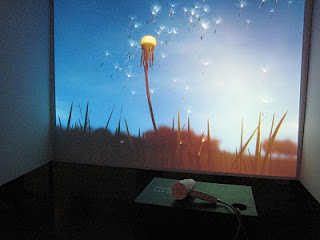 This exhibition at the V&A featured digital and interactive designs. It looks at three themes: code, which shows how computer codes are used as a design tool; interactivity, which included works that respond to the presence of the audience; and network, which charts the traces we leave. The pieces I liked best were in the interactive section. One of these was the uncanny Venetian mirror by Fabrica, a large screen surrounded by pieces of mirror that portrayed the type of mirror that would be found at the head of the stairs in a Gothic house. As you stood in front of it a ghostly copy of your image appeared in the central panel. Dandelion by Sennep (pictured here) was another of my favourites because it was so entertaining. The viewer could use a hairdryer, containing an infra red light, to ‘blow away’ the seeds from the dandelion head. The Tree by Simon Hejidens was a light silhouette of a tree which moved in concert with the wind outside the museum. Body paint by Mehmet Akten converted actions into colours on a screen; this worked very well as an interactive piece because the colours change as the viewers moved but it also encouraged the viewers to interact with each other to produce even more colours.
Posted by Carol Q at 10:41 No comments: