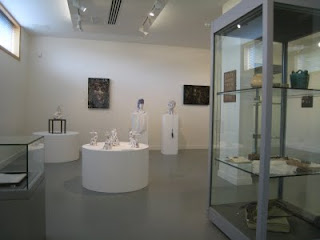 For this exhibition at the Craft Study Centre, Farnham, four artists were invited to browse the collection and produce a response to their chosen items. Most of them chose the paraphernalia of daily life held in the archive as their starting point rather than resolved items, for example Lucie Rie’s glazing samples and driving licence were selected instead of her ceramics. Interestingly, all the responses are works that not what they seem at first glance.

Laura Potter chose Lucie Rie’s glazing samples from the collection and felt that by choosing something personal that had not been made for exhibiting she became closer to Lucie Rie as a person. Laura was inspired by the archive to produce an archive of her own unfinished work, enclosed in small wooden boxes. Studying the collection made her consider how she remembered dead relatives and how she would be remembered in turn. In response to this she has produced a tungsten carbide ring that should withstand the process of cremation and another made of thin gold rings – one for each year of her life. She notes that she is trying to control how her family remember her, but, ironically, this exhibition shows that artists are often remembered for the ephemera of their lives rather than their considered work.

Stephen Dixon used fragments from the collection combined with previous research into war records in Italy to produce a series of plates and bowls revealing the story of an Italian soldier. He also showed a series of earthenware ‘pages’, apparently torn from a notebook, depicting notes and wildlife from Australia.

Elaine Wilson considers female identity and how it is affected by cultural and social pressures. She chose textile samples by Barron and Larcher and Lucie Rie’s photograph album as her inspiration and combined the ideas in a series of figurines embellished with fabric patterns. Her elegantly dressed gun-toting figurines are unsettling domestic china ornaments that question the conventional role of women.

For her re-workings of old master paintings Maisie Broadhead regularly uses museums and galleries for inspiration. From the Craft Study Centre collection she chose a jug Bernard Leach had collected, which had also been selected by Alison Britton for a previous exhibition. Maisie re-worked Vermeer’s The milkmaid with Alison acting as the milkmaid pouring from the jug. Like the other artists in this exhibition, her work disguises its true nature. Her photographic images appear to be copies of the old master paintings until a second glance reveals the truth.
Posted by Carol Q at 02:17 No comments: