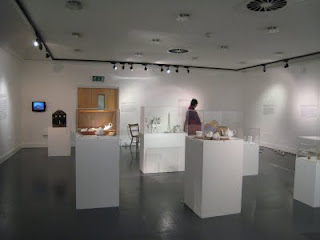 This excellent exhibition at the Hub Gallery, Sleaford, brings together work from recent UK graduates who are inquiring into the subject of domesticity with a twist, which mirrors my own work on the uncanny and subverting the domestic. I thought Emily Winning’s boxed sets of do it yourself ceramic tea sets were a witty addition to the patched up cups and saucers available in many galleries. Rebecca Fairman’s Cold comfort was a clever twist on the child’s quilt, made entirely of ceramic blocks impressed with lace but looking uncannily like a soft, comforting quilt. Charlotte Agius’ mop and brush made of hair were deliciously unsettling and her chair sewn together with hair reminded me of Doris Salcedo. The star of the show was Beatrice Baumgartner’s ‘La maison oubliee’, a home made dolls house in which ‘traces of human presence had been consumed by nature’s incessant force’. Beside the house a DVD of stop frame animation showed how the disintegration of the house had occurred, it lasted for 9 minutes, but held me and many other visitors spellbound from start to finish.
Posted by Carol Q at 02:56 No comments: 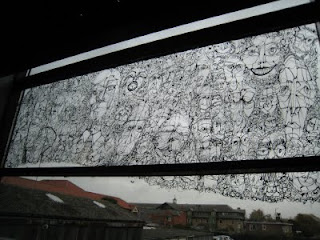 Clare Knox is the winner of the annual award by the Hub Gallery, Sleaford, to a recent graduate at Manchester Metropolitan University. She makes lace like panels and jewellery by drawing with a glue gun. I liked her panels, which were hung at the windows on the Museum’s main staircase, but was less interested in the jewellery which seemed quite crude in close up, I would have preferred something finer and more detailed.
Posted by Carol Q at 02:46 No comments: 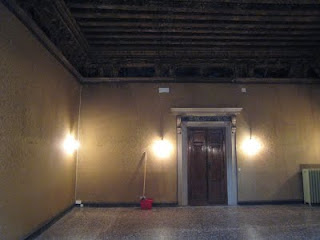 Teresa Margolles’ work entitled ‘What else could we talk about?’ was in a beautiful palazzo behind Saint Mark’s Square. Her work deals with the recent upsurge of violence in Mexico. She works with collaborators to find the scenes of violent crimes, where they mop up blood or some of the mud from a scene of execution. From these remains she produces hangings drenched in blood or mud. In this intervention, those containing mud were kept moist with a fine spray and the mud collected from them was used to mop the floors of this ancient palazzo. I found the hangings rather ghoulish and macabre and it felt as if these people and their blood were being exploited. I did not understand why the blood and mud were being washed into the fabric of the palazzo which had no connection with the original site, but I did find the mop and bucket in the empty room intriguing and felt that was a more subtle way of transmitting the message. However, some of those who saw it with me were moved by the hangings, which I am sure was the intention of the artist.
Posted by Carol Q at 02:45 No comments: