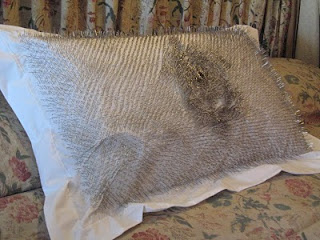 This symposium in Brighton was organised by the unravelled group and followed a morning at Preston Manor being shown their exhibition. The first speaker was Frances Lord, an independent curator, who had worked with Catherine Bertola on her exhibition at Nottingham Castle, she talked about her recent work. Lyndall Phelps spoke about her residency at the Natural History Museum store at Tring, where she studied specimens that had been stored in stately homes for safety during the war. Catherine Bertola talked about her work and inspiration. The image above is of Catherine Bertola’s ‘If she is not out as soon as I’ exhibited at Preston Manor – the title is taken from a lace tell.
Posted by Carol Q at 04:13 No comments: 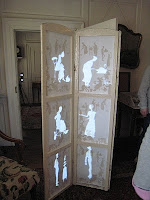 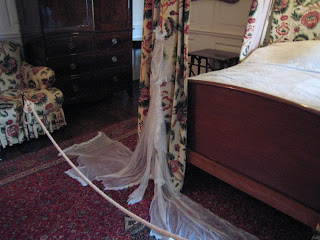 This domestic setting served to show off the quirkiness of the exhibits in a way that would not have been possible in a white cube setting. It was also interesting to hear the artists talk about their work and inspiration.
Posted by Carol Q at 04:07 No comments:

The concise dictionary of dress 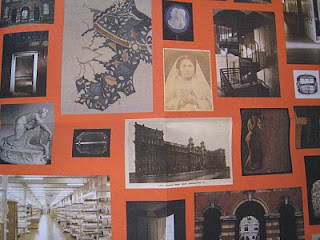 This exhibition at Blythe House, the museum store for the V&A, was an intervention by between fashion curator, Judith Clark, and psychoanalyst, Adam Phillips. They chose 11 words that were linked to psychoanalysis and dress, Phillips then wrote definitions for them and Clark produced the installations linking them to dress.

The whole experience was staged, you had to be escorted through the store in a group of seven people, each exhibit was revealed to you in turn and you were then given the definition of the word being depicted. This theatricality enhanced the experience and made it feel as if you were discovering the installations for yourself. The 11 words were: armoured, brash, comfortable, conformist, creased, diaphanous, essential, fashionable, loose, measured, plain, pretentious, provocative, revealing, sharp, tight, and the link between them and the exhibits was not always obvious, although they provided food for thought. However, in a discussion in the evening between the artists and Lisa Appignanesi at the London College of Fashion they revealed that Phillips’ words were prompts for Clark rather than absolute definitions of the exhibits. Likewise, they seemed to be prompts for the viewers and Robert Frost was quoted ‘look after the sound and the sense will look after itself’.
Posted by Carol Q at 04:04 No comments: