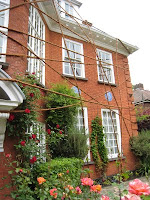 The Freud Museum is hosting an exhibition by Alice Anderson, but in this case the exhibits are not all enclosed in the Museum. Anderson has wrapped the exterior of the Museum in doll’s hair – and very effective it is. Her work is based on her childhood ritual of winding threads and hair round parts of her body and other objects to calm her anxieties when she was left alone. The hair also represents the link between mother and child. In much of the work here she arranges the doll’s hair in lines and grids in what seems to be an attempt to destabilise the male grid by using feminine hair and in one instance uses it to trap a model of herself. However to do this she wraps the hair around metal rods, so it seems to be softening the rods, rather than making the bars out of the hair themselves. The most effective piece in the house was the Butterfly ritual, a video performance in which she unwinds a bobbin of thread from a balcony, thus making it dance and flutter like a butterfly, and winds the unwound thread round and round her finger. The spider’s web of hair, forming a soft yet effective barrier in Freud’s studio was also arresting. But by far the most effective piece was Housebound, in which the house itself wound with doll’s hair.
Posted by Carol Q at 03:15 No comments: