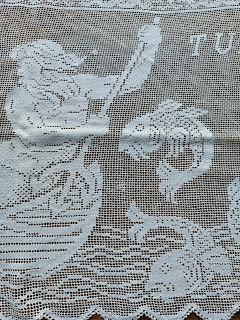 The prompt for today’s lace challenge is ‘ocean’ which made me think of this filet lace panel I bought a while ago of Diana and Neptune on the sea with assorted fish and sea monsters. The pattern for this seems to have originated in Germany at the beginning of the twentieth century when there was a revival of filet lace both for furnishing and as a hobby for home lacemakers. However, the origins of filet lace or lacis as it was known stretch back to the sixteenth century and there are numerous pattern books dating from that time, many of which have been repurposed since, so the design could have older origins. 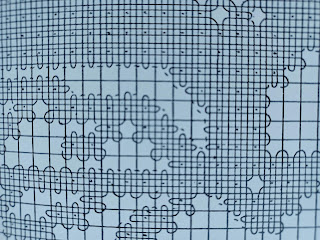 Many designs for filet lace are shown with the pattern marked in small crosses which does suggest that they could also have been worked as embroidered cross stitch. It is also a bit misleading though as the filet technique has no links to cross stitch and in fact is made in a running woven technique. The thread pattern has to be carefully worked out before the worker starts as the thread is woven over and under the meshes of the net in a continuous line vertically up and down the pattern like the diagram above. At points in the design the worker changes direction and works horizontally across the threads already laid this time weaving under and over the laid threads as well as those of the net mesh to give an open but woven appearance. It does produce a firm type of lace though well suited to furnishing.

Back in the studio 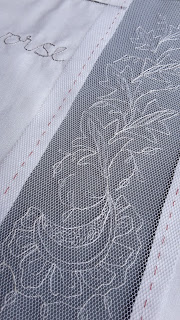 It’s good to be back in the studio after the Christmas break making lace plans for the new year. I’m very pleased to have work in the current Tansa miniatures exhibition which is currently showing at the Crafts Study Centre in Farnham until 26 March. I will also have some larger pieces of lace in the complementary exhibition at South Hill Park in Bracknell from 26 February until 3 April. The work at both venues is the result of a research visit by UCA textile researchers to Japan in 2019, following which we and some of the Japanese artists we visited encapsulated our responses to the trip in textiles. I feel especially lucky to be able to show some work in the current pandemic when so many venues are closed. The miniature works are also travelling to Japan in April to be exhibited at Gallery Gallery in Kyoto which is also a great honour. As well as the Japanese themed pieces I’m also still working on my unhomely doily series hoping to produce a group of them for exhibiting. I’ve published a couple of papers in Textile the journal of cloth and culture this year, one on the lace designer Amy Atkin (the image above shows a detail of my textile response to that work) and another on textile responses to domestic trauma. I’m currently writing a chapter for a textile book on Belgian war lace and have started the research for another paper on the work of Harry Cross who designed beautiful machine lace curtains and the famous Battle of Britain lace panel. I like to have a mixture of practice and writing so I’m looking forward to the new year and getting back to work.
Posted by Carol Q at 10:57 No comments: