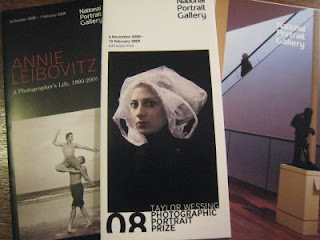 We visited the National Portrait Gallery to see the exhibition of the Taylor Wessing Photographic Portrait Prize. These contemporary portraits were all quite different and had approached the subject from different angles. Each image had an accompanying description and explanation of who was depicted in the portrait and the circumstances under which they were taken. It was an absorbing exhibition.
Posted by Carol Q at 06:19 1 comment: 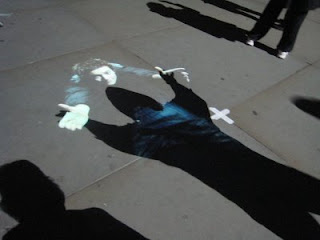 Underscan is a interactive video art installation designed by Rafael Lozano-Hemmer to be shown in a public space. Passers by are detected by a computerised tracking system which activates video portraits projected on the pavement within their shadow. The people depicted in the videos lie dormant until the shadow of a passer by moves over them, then they start moving. The inspiration for the work was a study of shadows. We saw the installation in Trafalgar Square outside the National Gallery. I thought the images would be more interactive, but on the evening we saw them the videos just seemed to run at random intervals it was difficult to activate them and others ran for several minutes whether people were interacting with them or not.
Posted by Carol Q at 06:16 No comments: 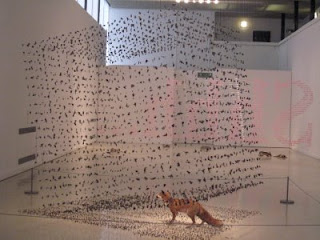 This exhibition by Claire Morgan in the Hockey Gallery, Farnham is fascinating. She uses scraps from discarded plastic bags to make delicate nets of thread in which stuffed animals are trapped. The pieces are all large scale sculptural installations that have an ethereal quality. I particularly liked the piece in the Foyer gallery that seems to jut out a line of autumn leaves from the gallery wall into the garden beyond so the distinction between inside and outside is blurred. The image shows a piece with a cube made of strings of fishing wire and pieces of plastic bag hanging over a stuffed fox.
Posted by Carol Q at 06:15 No comments: 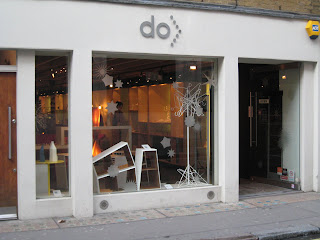 This shop in Beak Street London (http://www.do-shop.com/) sells all sorts of clever quirky designs. I particularly liked the wooden postcard jewellery, the commemorative tea towels depicting ‘modern’ Britain, the kitchenware and the table mats. I bought a book about Droog design to enjoy looking at more interesting designs at home.
Posted by Carol Q at 06:13 No comments: 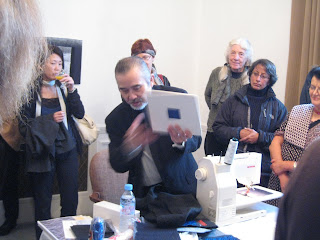 This exhibition by Tetsuo Fujimoto was held at the Daiwa Foundation near Regents Park. He makes textile hangings and wall pieces made of machine embroidered cloth. They have a very three-dimensional quality from a distance and are full of interesting detail in close up. On 14 November, Tetsuo Fujimoto gave an illustrated talk about his work and was in conversation with Lesley Millar. He described the difference between Japanese and European painting and showed us how perspective differs in the two systems. He does not make any preparatory drawings for his work but embroiders directly on to the cloth. He also gave a demonstration of his working technique. We were delighted to meet him and his son.
Posted by Carol Q at 06:11 No comments: 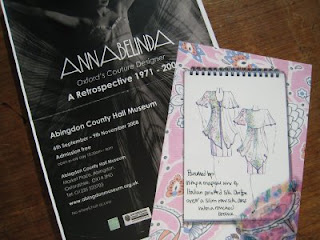 This exhibition at Abingdon Museum celebrated the fashion designs produced in the Annabelinda shop in Oxford from the early 1970s to today. The shop is well known in Oxford for producing beautiful clothes for special occasions; its trade marks are its lovely fabrics, piping and delicate embroidery. It was interesting to browse the exhibition and be reminded of all the fashion styles that have come and gone over the last thirty years and to admire the beautiful workmanship.
Posted by Carol Q at 06:10 No comments:

Introduction to the history of dress 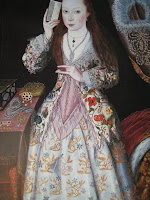 This course held in October 2008 was organised by the Oxford University Department for Continuing Education. It focused on dress in the seventeenth century, how we can find out about dress from paintings, literature and textiles and its significance for social history. Clare Backhouse was the lively and knowledgeable tutor who provided numerous images and a wealth of information. The participants on the course were very well informed, which made for interesting discussions. The class was oversubscribed and left us all wanting more so we hope Oxford University will run more classes on the history of dress. The image is of Elizabeth Vernon.
Posted by Carol Q at 06:06 No comments: 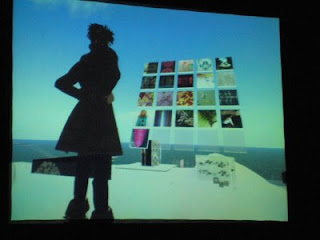 The Textile Futures island on Second Life shows the work of TFRG members. You can walk or fly round it with an avatar and see the works in three dimensions. There is an information icon next to each piece which gives a link to a web page giving more information on the creator of the work. This image shows an avatar looking at the panel that depicts all the artworks on the island.
Posted by Carol Q at 06:04 No comments: 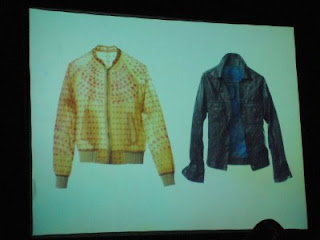 Neil Parry from Unilever described his research into smart particles which can be used to transfer vitamins from washing powder to clothes and then be absorbed by the skin. He also told us about molecules that can target the hair. The evening closed with a question time panel for discussion.
Posted by Carol Q at 06:01 No comments: