Grayson Perry: the tomb of the unknown craftsman 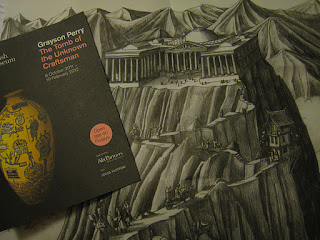 For this exhibition at the British Museum, Grayson Perry chose exhibits from the Museum collection and combined them with his own work and items from modern culture to comment on ideas of craftsmanship, sacred journeys and contemporary culture. He is interested in the role of the craftsman, who is often unknown, and notes that craftsmanship is less to do with precision making than a relationship with materials.

The exhibition was on a larger scale than I had expected and yet was much more personal than anticipated. Apart from the labels for the artefacts, there were panels quoting Grayson Perry and explaining the reasons behind many of his choices of items, although not all of them, which allowed the audience to make their own connections as well. Also, in several cases, it was not until you read the labels that you could distinguish the Museum artefacts from the modern equivalents. In many cases Grayson Perry cleverly uses his teddy bear, Alan Measles, as an alter ego to comment on contemporary culture and he appears on pots, fabrics and tapestries in different guises.

Some of the main themes were pilgrimage, the journey, shrines, and magic. Grayson Perry compares practices from the past and the present, for example pilgrim tokens and portable shrines, which he notes are no different from collections of photos on modern smart phones. Regarding magic, he says that artists are like shamans or witchdoctors because they give things meaning and transform ordinary materials into something significant.

Commenting on the role of the craftsman, Grayson Perry considers patina and texture and notes that damage, decay and dirt are part of the language of authenticity. We are asked to consider whether provenance or age is more important than beauty. Another important point is that everything in the British Museum was contemporary once and this idea inspired his pot entitled ‘The frivolous now’ (2011), which incorporates phrases from current TV shows. A number of recent pots made by the artist as a response to this exhibition were on show, including ‘The Rosetta vase’ (2011), a play on the Rosetta stone also housed in the British Museum. In this case the vase is unlocking the knowledge of culture, which could have been an alternative title for this interesting exhibition.
Posted by Carol Q at 01:35 No comments: