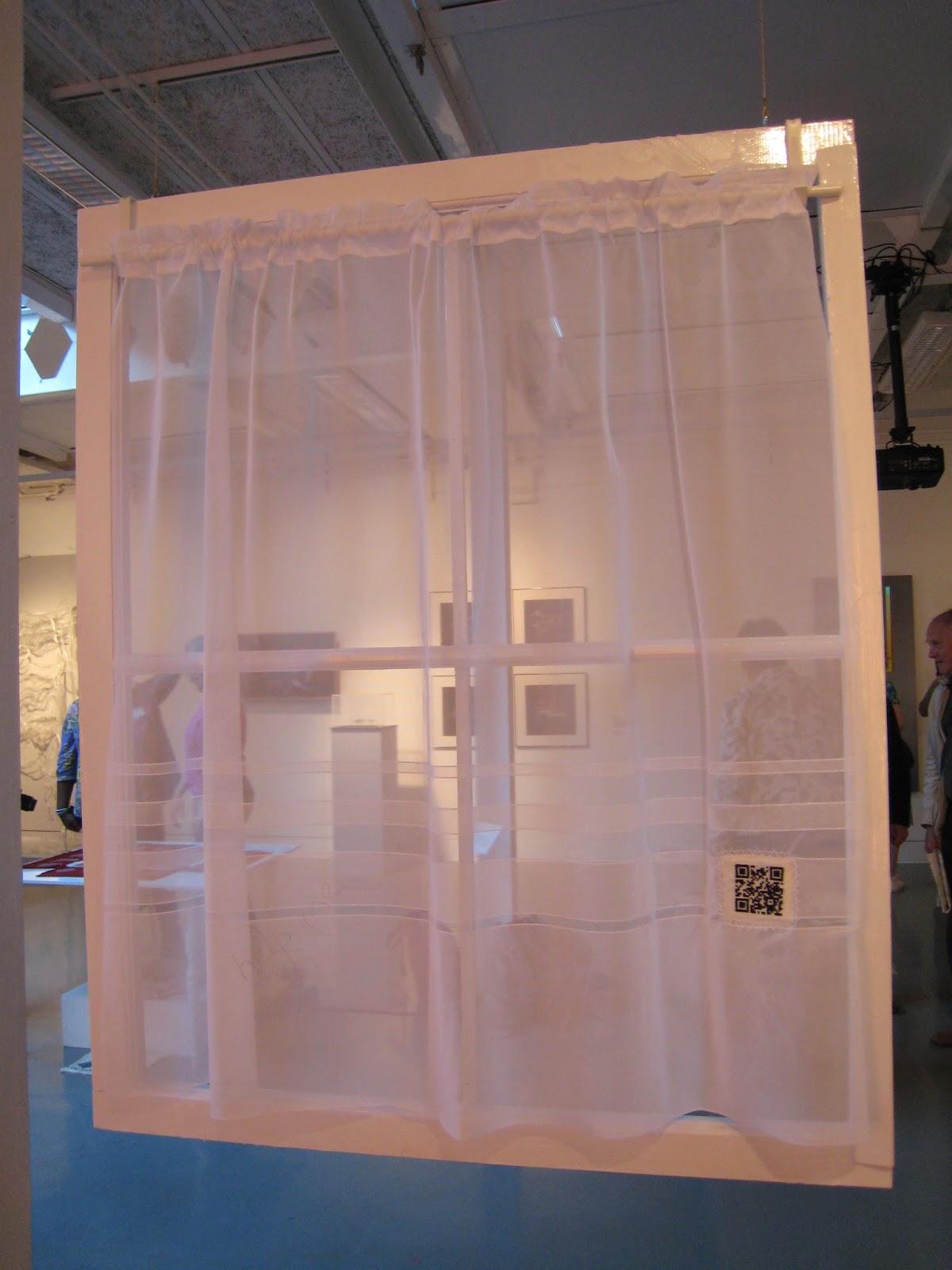 This exhibition at the Herbert Read Gallery in Canterbury opened last week and my previous post described the opening symposium. The exhibition celebrates current practice using digital textile design in its many forms and links the digital to four themes: material, personal, social and historical. Its aim is to explore the role of digital technology in contemporary textile practice. As the curator, Jenna Rossi-Camus, reminded us in the symposium, digital implies modern technology but also has links to the handmade. The exhibits include smart textiles, digital printing, interactive textiles, digitally produced textiles and digitally reconstructed historical artefacts. There are over 40 pieces in the exhibition so I will just give you a flavour of some of my favourites. Quite a lot of the work involves digital textile printing which was beautiful in many cases but inevitably I was drawn to the more quirky exhibits. I was fascinated by the textiles of Nadia-Anne Ricketts, a former ballet dancer, who discovered a mathematical connection between music and fabric construction and now weaves music under the name Beatwoven.

I also liked the subversive nature of ‘Disastrous dinner’ by Wendy van Wynsberghe and Claire Williams (above) which uses Arduino technology to produce an interactive dinner party table cover. Placing your hands in different combinations on the tablecloth produced conversations, rude noises and the sound of breaking china. My own net curtains ‘Insider information’ (image at the top of this post) and ‘Unheeded warning’ are also interactive and I was pleased to see the QR codes working on several phones during the evening of the private view.

I also liked Hannah White’s laser cut lace (above) made from reflective materials that highlighted the movement of models wearing the lace. Another interesting piece was Shelly Goldsmith’s ‘Concealed’ an embroidered blouse hiding the image of a woman from the Lodz ghetto within the embroidery. I also liked the elegant simplicity of Jenny Shellard’s ‘Palindrome’ and the complexity of the figures drawn by Rosie James in ‘In the city’ using the sewing machine. All in all, there is plenty to see in this exhibition and the catalogue is an interesting read so it’s worth a visit. 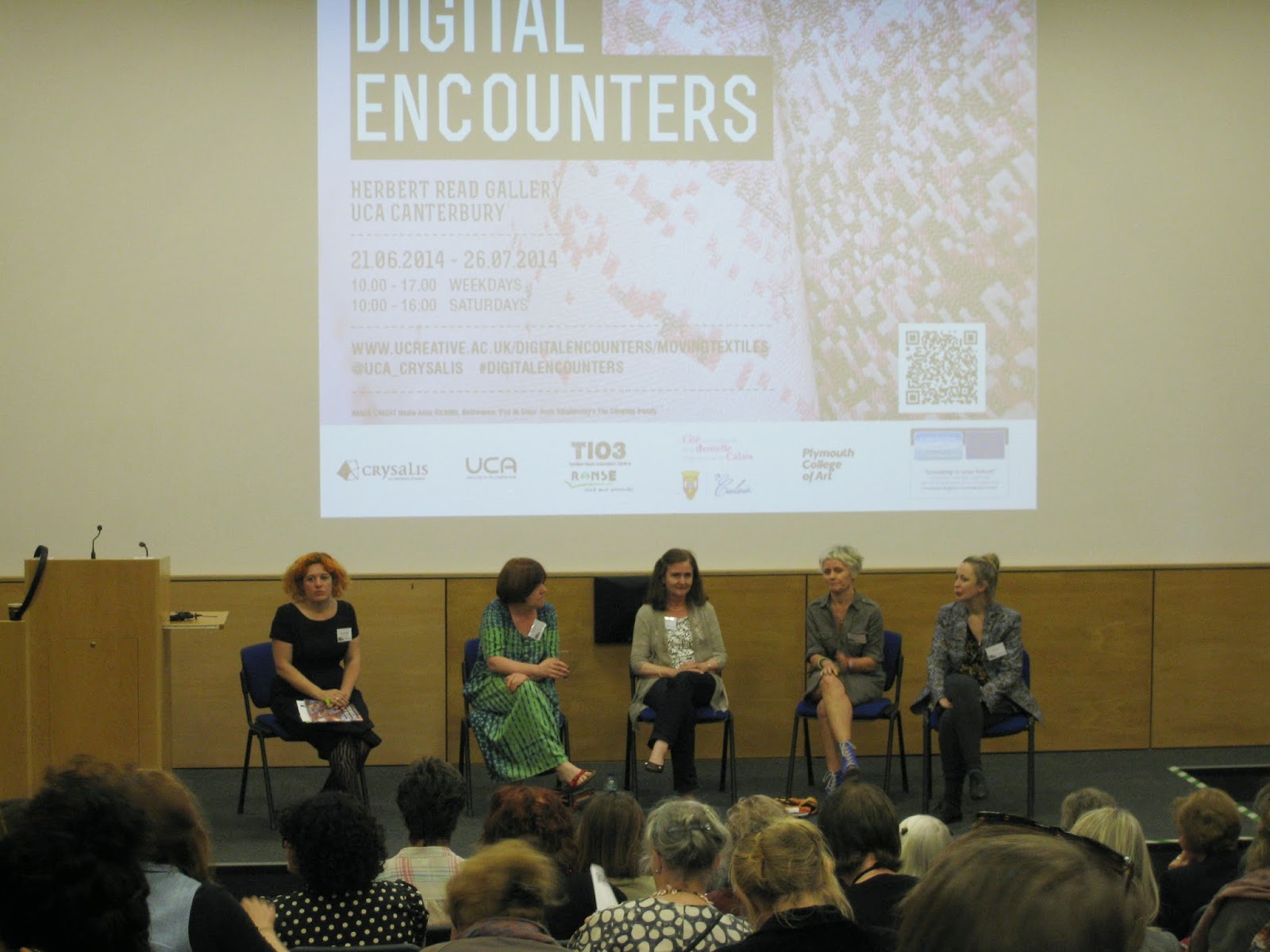 The Digital Encounters exhibition opened yesterday at the Herbert Read Gallery in Canterbury and two of my curtains with QR codes are in the exhibition. The event opened yesterday with a symposium before the evening private view. Both the exhibition and symposium were divided into four areas concerned with different aspects of digital textiles; my work was shown in the digital x social section and I took part in the panel discussion linked to that theme. My fellow panelists were Rosie James (who uses the sewing machine as a drawing tool), Louize Harries (whose work considered the possibility of robots creating craft) and Nicola Flower (who talked about her embroidery project with the visually impaired) as well as the curator of the exhibition, Jenna Rossi-Camus, who facilitated the discussion. We talked about our processes, the themes engaged in our work and the time-consuming nature and value of hand work. The other panels linking the digital to material, personal and historical were also interesting particularly the insights they gave into the work in the exhibition. I’ll blog about the exhibition in another post.
Posted by Carol Q at 08:39 No comments: 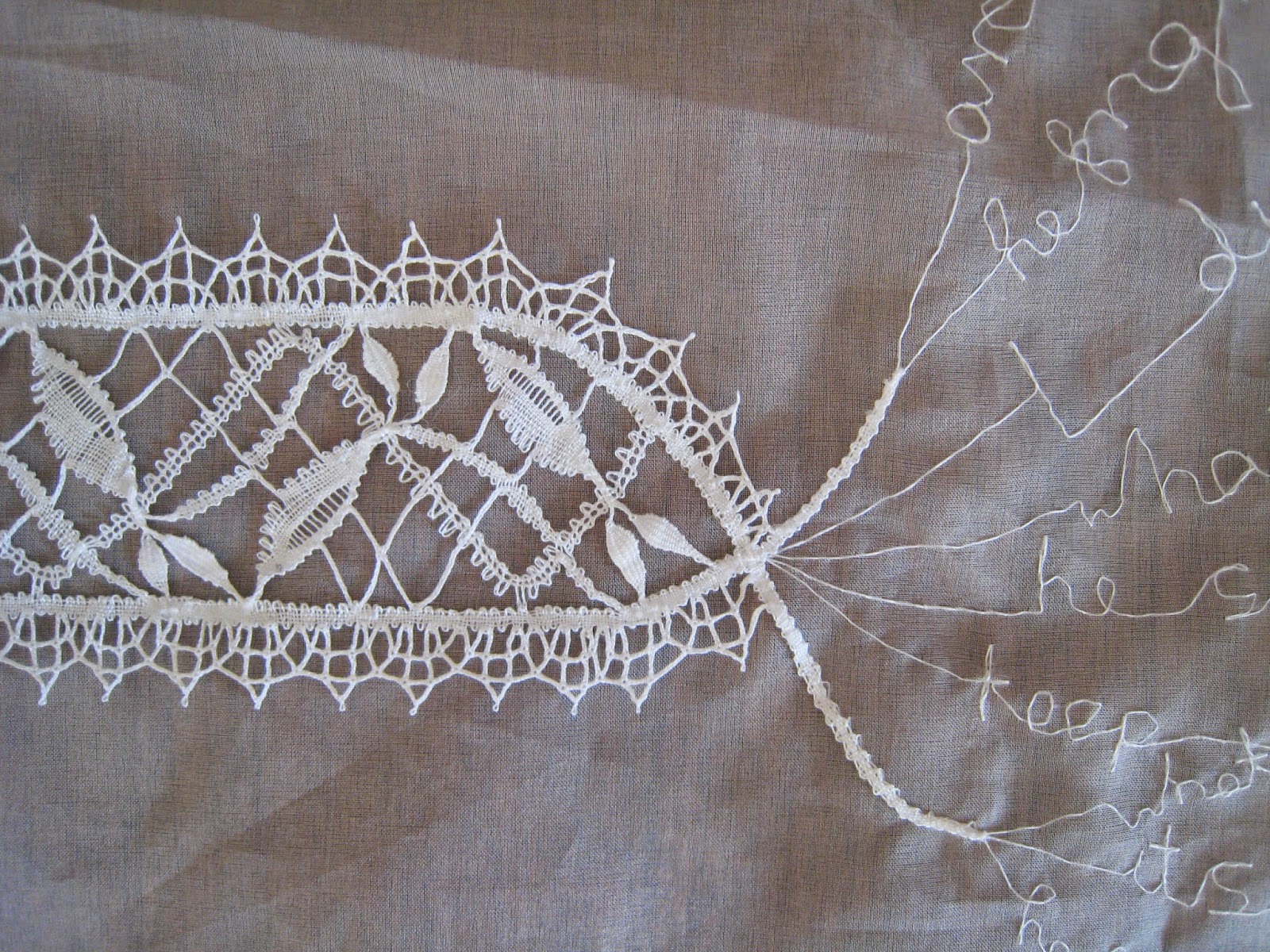 My curtain entitled Whisperings is currently being exhibited at Waddesdon Manor as part of the ‘Imagine … lace at Waddesdon Manor’ exhibition. The theme of the exhibition is ‘house party’ and the lace design had to be based on an artefact in the Manor. I chose to design a piece of Bedfordshire style lace based on a bundle of lace trimmings in the Waddesdon lace collection. The idea is that the lace pattern is quite formal and represents a very polite and conventional house party which might begin with formal introductions and polite conversation but then degenerates into a babble of voices, confidences and gossip. The formal lace pattern is then subverted to become a tangle of whispers, innuendo and hidden conversations. There are nine ‘whispers’ altogether including ‘Have you heard what she did?’, ‘Keep out it’s not your business’, ‘He says she’s not herself today’, and ‘He frightens the life out of me’. So all is not the comfortable veneer we assumed to start with; there are some hidden whispers and cries for help under that formal pattern.
Posted by Carol Q at 07:33 No comments: 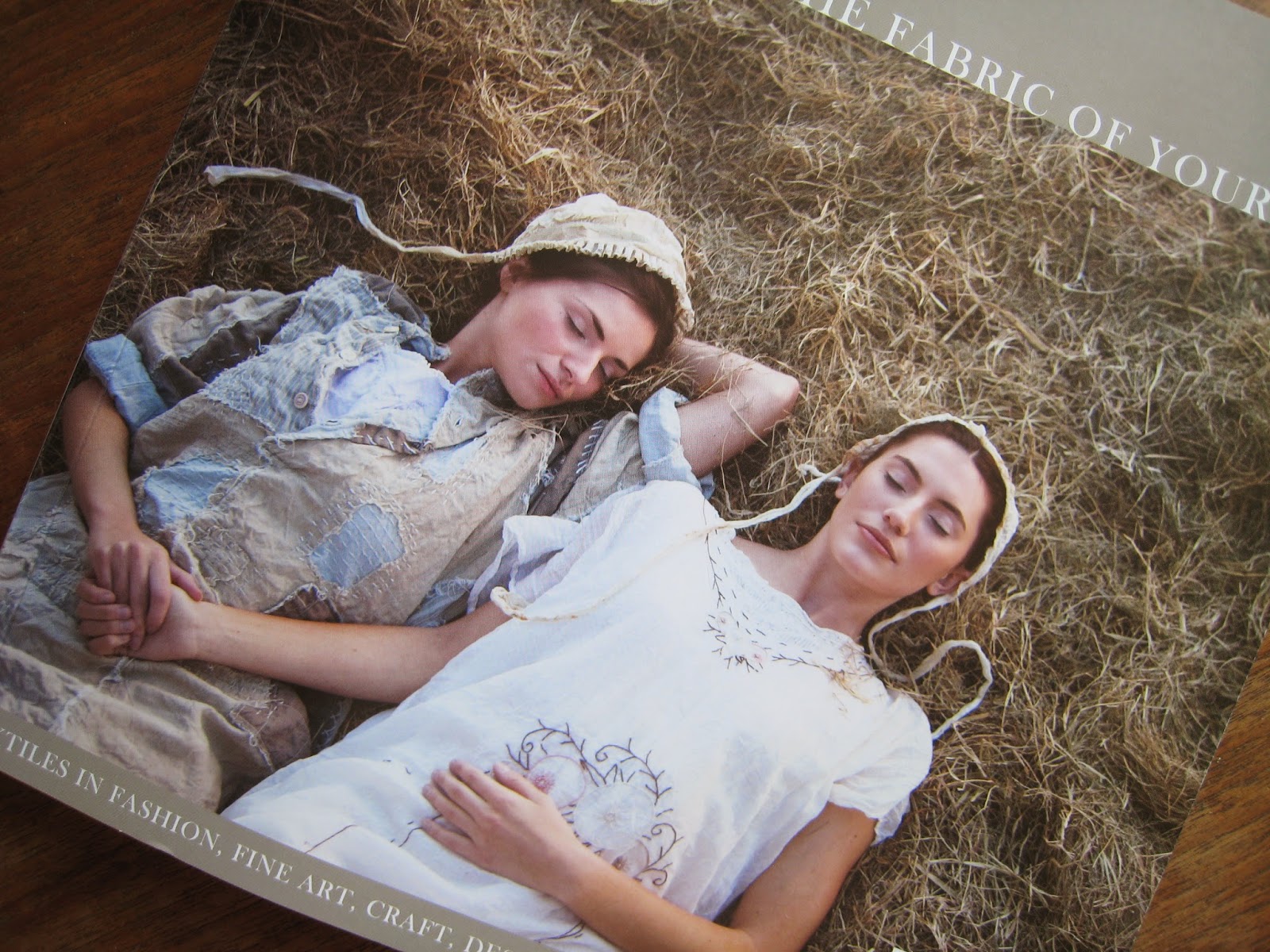 The current issue of Selvedge magazine (May/June) is a bit of a lace themed issue. I have a piece in there on the cut works of Piper Shepard, which is mainly a review of the recent exhibition but also describes her working technique and is illustrated by an image of her Granulated diamond hanging. There is also an article by Annabel Talbot of the Bowes Museum about the development of lace for fashion in the 17th century, which is beautifully illustrated with some Flemish lace. Finally, there is also an article about the work of Iris van Herpen, which although it is not traditional lace is very lace-like in its effect. Worth having a look at if you can find a copy.
Posted by Carol Q at 04:52 No comments: 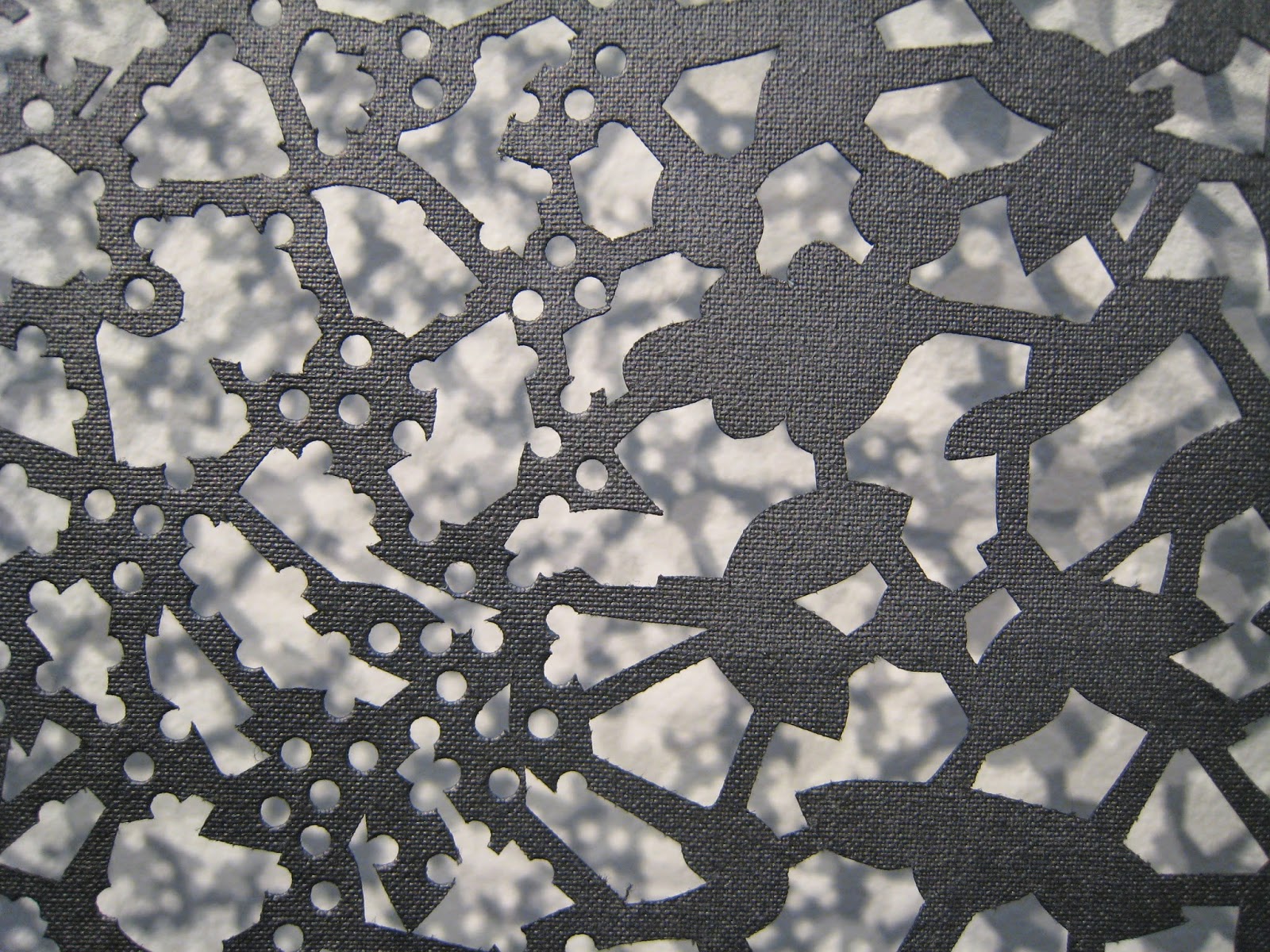 Even though Piper’s exhibition at the Crafts Study Centre in Farnham is finished I thought you’d like to see a close up of her work to see how it is made. This is a close up of ‘Lace like’ and you can see where she has cut with a knife in some places and a round punch in others. The fabric she uses is ‘muslin’ painted with gesso – I discovered during her visit though that what Americans call muslin we would call calico, which seems to correspond to the more solid nature of the fabric. During her presentation at the conference she told us that her interest in lace began when she was using devoré techniques and was further inspired by a visit to India looking at filigree screens, windows and walls. She is also interested in the shadows her work creates which are shown quite well in this image.
Posted by Carol Q at 07:31 No comments: