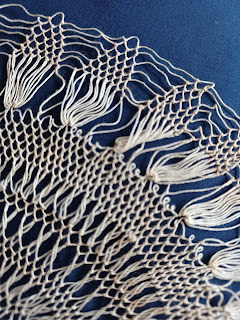 Netting has been practised for centuries and was used by early people to make fishing and bird nets and can also be used to make hammocks and lawn tennis nets. However the type of knot used for lace netting, seen in the image above, is slightly different and less bulky than that used for these utilitarian articles. Netting was a popular pastime in the early nineteenth century and in her novel of 1847, Charlotte Bronte describes Jane Eyre sitting in a corner netting a purse while she observes Mr Rochester and his guest in the drawing room after dinner. My 1882 Dictionary of Needlework gives several instructions for making a variety of netted purses for ladies and gentlemen as well as doilies (like the one below), antimacassars and a variety of other items. 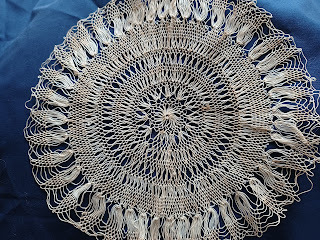 Netting is made from a continuous thread wound on a netting needle and the knotted loops are made, starting from a foundation loop attached to a cushion, round a stick to ensure all the loops in the row are the same size. Skill is required to keep the work even as the knots are hard to undo once they are made! The basic net structure can be varied to make different patterns including star netting, looped netting or fringes, and it can also be embellished with beads. Once the net has been made it can be embroidered in the same way as drawn thread work or be used as the basis for filet lace. What seems like a simple technique can actually be made in many decorative forms and shapes. 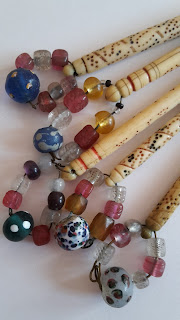 The spangle is the ring of beads attached to the end of English East Midlands bobbins to give them weight and ensure they lie flat on the pillow. They are generally made up of six square cut beads (three each side) with a larger bead at the base, although there are many variations. The larger bead is often more ornamental than the others and those in the image all have added dots of glass. The one on the second right is a confetti bead which was made by adding small chippings of brightly coloured glass to the surface of the bead as it was being made just before it solidified. The large green bead seems to have had the white dots added after it was made as they are slightly raised. The bead at the top is known as an eye bead as it has a series of dots on top of each other, loosely resembling an eye. The most famous of these types of bead is the Kitty Fisher eye bead, which is made of grey glass with small red and blue spots inside larger white spots, supposedly representing the beautiful face of the actress. These dotted beads may have been made locally or purchased from travelling salesmen as many beads were made commercially for trade in Africa and would also have been available for lacemakers to buy (see my blog post of 24 September 2021).
Posted by Carol Q at 08:41 2 comments: 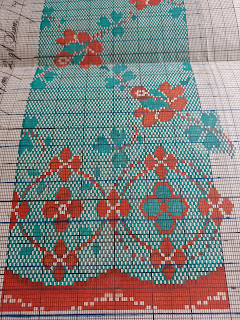 Apart from being a beautiful painting this is the draught, or coded instructions, required for a curtain made on the Nottingham lace curtain machine. A draughtsman would have painted it by hand following the original design drawn up by the designer. The draughtsman therefore had to be artistic and also know about the workings of the lace machine in order to translate the design into a workable pattern. This draught would then have been passed to the card puncher who would follow its instructions to produce the sets of jacquard cards needed to work the pattern on the lace machine. In general, red squares indicate back spool ties and green indicate Swiss ties, although there is no standard colour code and some manufacturers used different colours. This draught also has handwritten instructions along the length of the pattern describing among other things the width of the entire piece of lace (360 inches) and the type of lace (two gait Swiss). It also tells us that this is a 10 point lace which means that it is of medium fineness. I think these lace draughts are beautiful but the fact that they carry so much coded information makes them even more special.
Posted by Carol Q at 08:29 No comments: 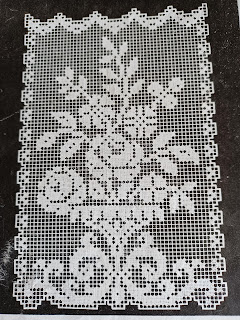 The instructions for making the curtains, which are all in French, suggest that the lace should be worked in blocks of 1 centimetre. The dimensions given are 141 blocks for the store curtain and 85 x 55 for the smaller ones. I assume from looking at the pattern that the measurement given for the store curtain is the width. This booklet gives no instructions for working the filet lace but another volume I have, from the same time, shows how to make the background net and work the stitches so I think the expectation was that the lacemaker would know how to do both.