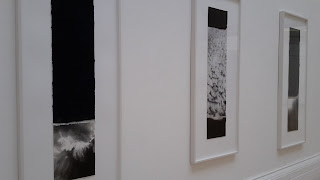 I enjoyed the exhibition ‘Air: Visualising the invisible in British Art 1768-2017’ at the Royal West of England Academy in Bristol. As the title suggests there were contemporary works and well known historic paintings by artists such as JMW Turner, John Constable, Eric Ravilious, Sir John Everett Millais, Samuel Palmer, and Paul Nash. The exhibition was divided into areas such as air, wind, clouds, breath and flight. The cloud pieces were very evocative and I particularly liked Ian McKeever’s three works entitled ‘… and the sky dreamt it was the sea’ shown in the image above. The historic paintings of clouds by Turner and Constable were also a treat to see close up. The works linked to flight were relevant to my current Battle of Britain commission especially one by Eric Ravilious painted shortly before he was lost flying off Iceland in 1942. However, flight also encompassed hot air balloons, barrage balloons and the movement of birds. Breath was linked to several pieces of glasswork linking the idea of ephemerality, biology, glass blowing and mist. It was a fascinating subject and with the promise of visualising the invisible was one I couldn’t miss. It runs until 3 September and is worth a visit if you’re in Bristol.
Posted by Carol Q at 10:28 No comments: 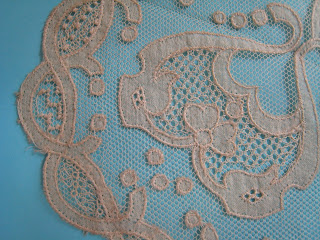 Gail Baxter and I recently ran a lace study day for the Crafts Study Centre at Farnham. The lace was all taken from the textile collection at the University for the Creative Arts and we aimed the day at those who had no knowledge of lace. The textile archive includes several pieces of lovely lace and other smaller samples so it is quite a mixed collection. We decided to base the day on techniques mainly to show the range of ways in which lace can be made. We started with a talk about contemporary lace then moved on to the collection beginning with bobbin lace including pieced laces like Honiton, continuous laces such as Bedfordshire and Eastern European tape laces. We then moved on to needlelace, and mixed needle and bobbin lace, of which the College has some lovely pieces. After that we looked at the needlerun laces including tambour and Carrickmacross, which led onto Irish crochet. We then showed some lovely examples of Shetland knitted lace from the collection and finished the day with examples of machine made lace and some other laces which didn’t fit into any of the other groups. We had a lovely group of participants and I hope we left them with a good overview of the many ways in which lace can be made.
Posted by Carol Q at 01:37 No comments: 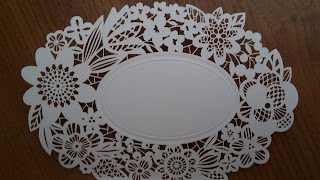 I’ve been looking at laser cutting this week and have discovered that like most techniques there is much more to it than meets the eye. For a start the machines aren’t just used for cutting but can also be used to engrave and score materials so are much more versatile than I thought. The book I’ve bought to help me learn about it is ‘Laser cutting for fashion and textiles’ by Laura Berens Baker, which provides 14 very clear tutorials explaining how to set up the Illustrator and CAD files needed to instruct the machine. I was interested to see that you use different coloured lines for different kinds of cut, in a similar way to the drafts for machine lace, which use different colours to indicate different thread movements and thus the type of stitch made. Although I love the effects produced by laser cutting I’m not sure I would enjoy all the computer work involved, my textile work is generally an antidote to sitting at the computer writing so I’m not sure adding more desk work is the way forward for me, but I’ll give it a go.
Posted by Carol Q at 02:25 No comments: 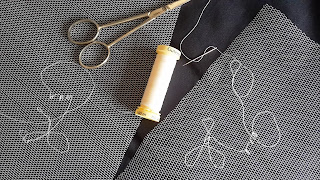 I’ve been working on my Battle of Britain lace panel commission this week. I’ve worked out the dimensions of the three separate panels and how large each of my digitally printed images needs to be on each one. The images on the two outer panels will be separated by strips of needle run lace reflecting the missing people behind the construction of the original lace panel. The central panel will be different from the other two and will incorporate images, silk paper and needle run lace depicting images from the airforces involved in the Battle of Britain. I bought two different types of net last week and have been trying out some stitching on both of them to decide which one to use. I still need to try out some silk paper samples on them both and leave them to hang and see how they perform, but so far I’m finding the one with the slightly larger mesh easier to work with.
Posted by Carol Q at 06:16 No comments: 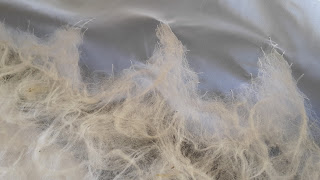 It’s interesting how one thing leads onto or informs another. I’ve now decided to incorporate some silk paper and stitching into my contemporary response to the Battle of Britain lace panel – not something that was in my original plan for the project! I first used silk paper many years ago as a way of showing my small experimental free bobbin lace cells as it allowed them to be seen from both sides. I then started using it to make panels incorporating lace, which allowed me to make larger pieces for exhibitions. Also in some of those larger hangings I included other threads and beads into the silk paper. More recently, for my ‘Dust and dirt’ hanging I made large areas of silk paper and then stitched over the top to give the impression the silk paper was blending into the background fabric (see the image above). A technique I also used in the Miss Havisham veil to link silk paper and net. For my Battle of Britain panel I’ve decided to use silk paper to reflect the idea of the flames licking round St Paul’s Cathedral and to form the feathered wings of a soaring eagle. So from using silk paper just as a support for my lace it’s now playing an important part in the design itself. I need to do some sampling to see how it will work though so watch this space!