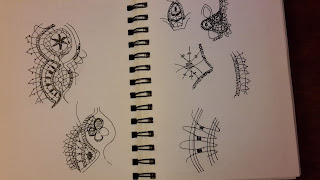 I had an interesting day yesterday talking to the granddaughter of Harry Cross, the designer of the Battle of Britain commemorative lace panel. Among the things we discussed was his approach to design and I was surprised to learn that he didn’t use sketchbooks. We are so used to using them today to draw from life, play with ideas, draw diagrams and collect information that not to have one seems amazing. Perhaps the companies he worked for had inspiration books for all the designers to use. I have seen some of these in archives, which may incorporate snippets of lace, fashion designs, pictures of flowers and architecture. Some are for general reference and others have obviously been assembled by individual designers for their own use. I wonder where he tried out his designs though, perhaps on pieces of paper that he then threw away once he’d produced the final design. Or perhaps the lace designers had to keep all the artwork with the design so it couldn’t be taken out of house and copied. However, it may be that the use of personal sketchbooks for designing is a modern idea which began with the development of City and Guild embroidery and textile classes as a way of learning and evaluating. Interesting thoughts that I will follow up!
Posted by Carol Q at 02:31 No comments: 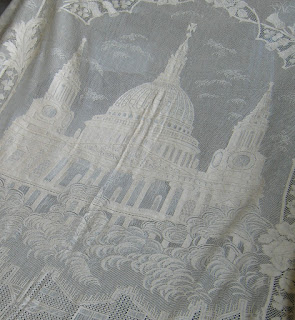 I spent a very useful day in London seeking out some of the buildings on the Battle of Britain commemorative lace panel that suffered bomb damage. Part of my contemporary response to the panel is to take photographs from the exact spots where the originals were taken, to show how they’ve been renewed, and then print them on to fabric for use in a larger installation. I’ve mapped them all out so I know where they are and I’ve booked a professional photographer to help me take the photos later in the year. This week’s trip was to see whether street views of some of the places are still accessible. I’ve discovered that the original image of St Paul’s Cathedral was probably taken from what is now the centre of a busy road and the one of the Old Bailey was probably taken from a window or roof on the opposite side of the road – neither problem is insuperable but just as well to know in advance! I also visited Susie MacMurray’s exhibition at the Mall Gallery – I’ve long admired her work - the theme was war and conflict, which tied in so well with the rest of the day’s research.
Posted by Carol Q at 23:50 No comments:

Lace curtains from the 1930s 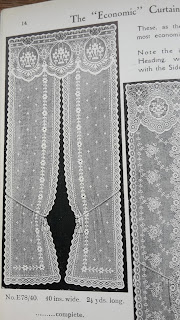 I’ve been enjoying looking through the latest net curtain catalogue I bought on ebay. It’s surprising that any of them have survived, as most people, including me, throw catalogues away as soon as they are out of date, but I’m so pleased to come across them as they usually give accurate images of the lace as well as measurements and sometimes prices as well. The first thing that struck me with these curtains from 1933 is that the curtains are not as wide as those from the 1900s which of course reduces the space for the designer. Although the curtains from both periods tend to have a border and a central panel, the later ones are much more compact and the designs seem more solid as a result. I was also interested in the ‘Economic’ curtains shown in the image which include the valance and lace curtains all in one piece. They are quite long (2.5 yards) but only 40 inches wide so seem to have been designed for an urban home, perhaps a Victorian terrace. Unfortunately there are no prices (I suspect the prices were on a loose sheet which has since been lost) so I don’t know how much they cost. The manufacturers were obviously careful not to commit themselves as there is a stern note saying ‘All prices are subject to Market Fluctuations’.
Posted by Carol Q at 00:40 No comments: 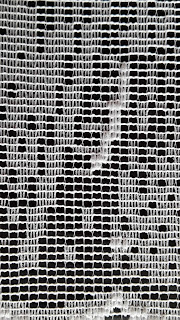 This week I’ve been trying to study the various stitches used by the Nottingham lace curtain machine and understand how they are made. I now have a better idea but still have much more to learn. There seem to be two main types of ground stitch: filet and Swiss net. The filet grounds produce a square net like handmade filet net and they can be single-tied or double-tied at each side, depending on whether the bobbin thread linking the warp and bottom board thread together passes round them once or twice. In Swiss ground the net is not an exact square but forms a V shape, which you can see in the image above. There are then many variations depending on whether every bottom board thread is linked to the adjacent warp, linked to the warp beyond that one, or just twisted round the warp to form a pillar. It is complicated but I am beginning to understand it!
Posted by Carol Q at 03:59 No comments: