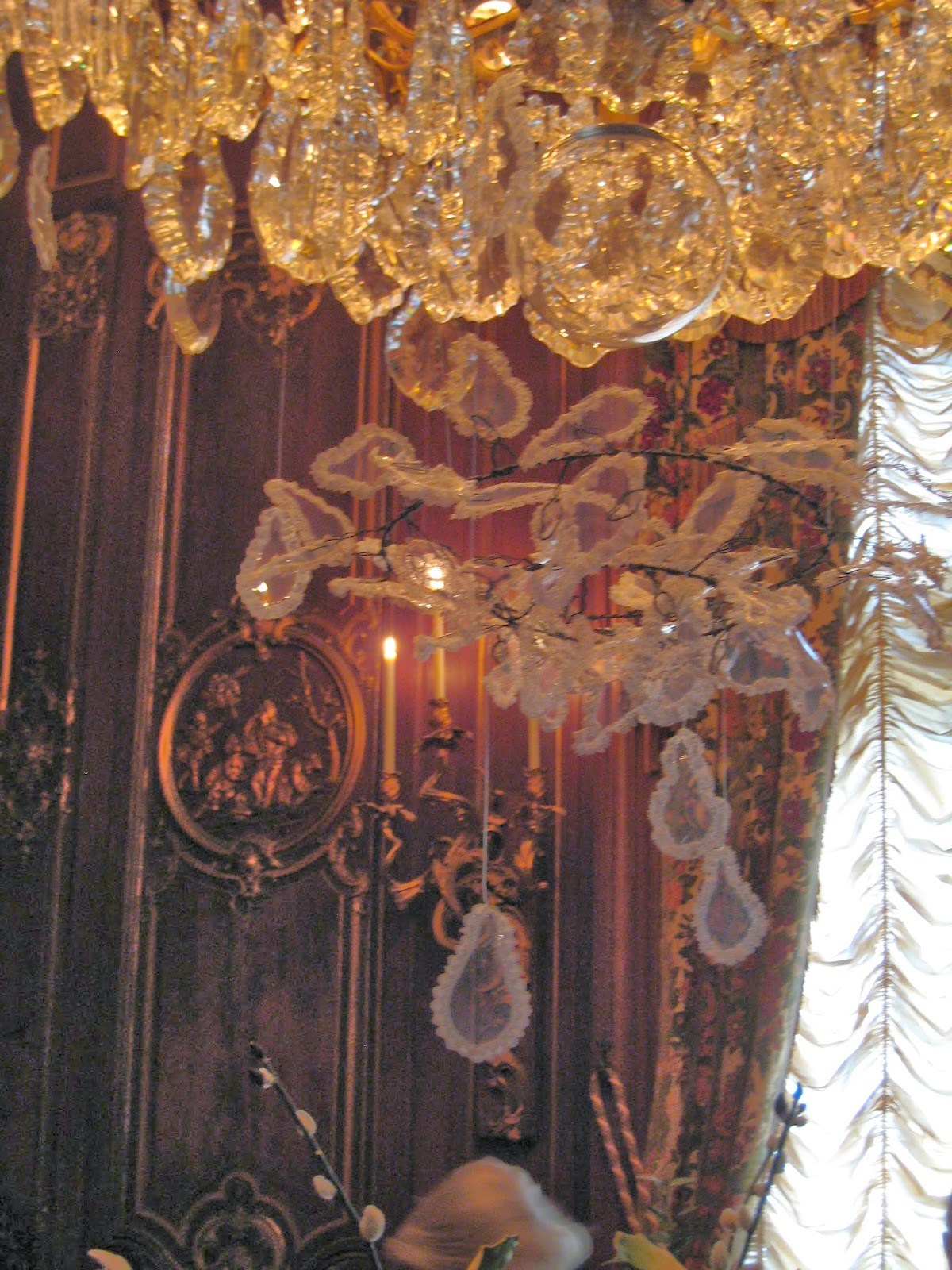 This exhibition of lace at Waddesdon Manor is a response by lacemakers to the house and its collection. Some of the pieces are individual responses and others have been worked by groups, such as ‘Phantom’ in the image above which is a response to the chandelier in the breakfast room by Norfolk Lacemakers. Some of the work is a response to the lace collection at Waddesdon, following a study day last year, such as Jane Atkinson’s ‘Made to fade’ panel and my own curtain with Bedfordshire style lace which I’ll blog about another time. Textiles in picture form had been the inspiration for Sue McLaggan’s body piece based on designs for the Ballet Russe and for Laura Marsden who had made a beautiful lace ruff from plastic bags, based on a 17th century portrait of a woman in a ruff. Others had been inspired by the Sevres porcelain collection, including Gill Bird’s three dimensional trumpet tiara and Judith Connors’ floral tiara. Jenny Thurgood’s miniature box was inspired by the collection of enamel snuff boxes. While Gail Baxter linked a Meissen bird cage and the aviary in her sparkling black stole ‘Gilded cage’. Lauran Sundin also linked two themes in her stunning black and gold necklace, in this case a carpet and mourning jewellery. Others had used the structure of the building as inspiration including Denise Watts whose necklace referenced the staircase and Nicole Valsesia-Lair who had based her work on the skyline of the Manor house itself. There were so many inspirational themes and pieces and I don’t have space to mention them all, but the exhibition runs until 26 October so there is plenty of time to go and see them for yourself.

The grammar of ornament: new papercuts and ceramics 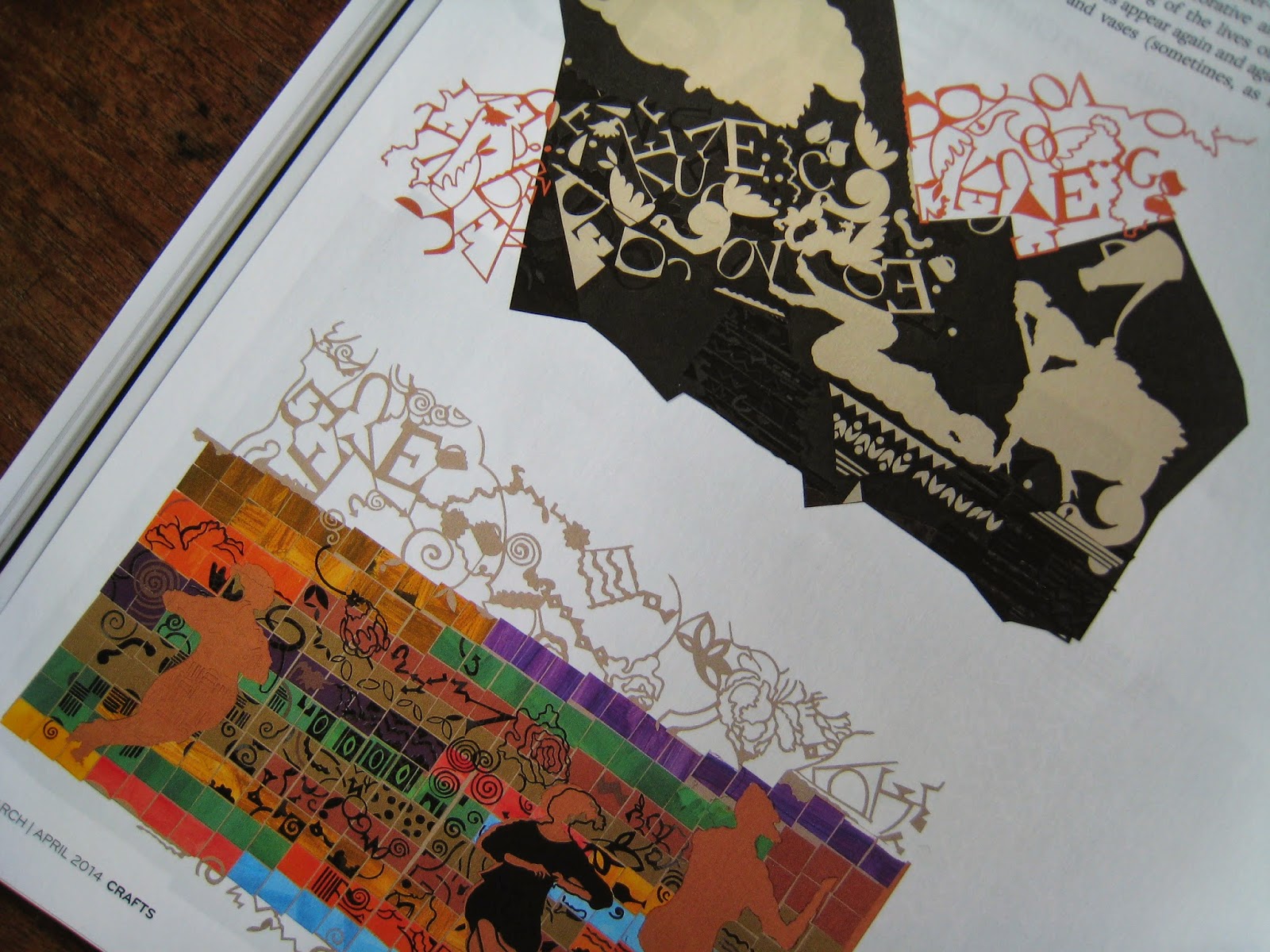 This exhibition at jaggedart in London shows a new body of work by Charlotte Hodes created in response to ‘The grammar of ornament’ an influential book on decoration and design written by Owen Jones in 1856. Until then, the decorative arts were traditionally associated with women and often considered frivolous and unnecessary. The ‘propositions’ in Jones’ book aimed to educate ‘artists, manufacturers and the public’ about the correct rules of ornament. Hodes subverts the ‘propositions’ that rigidly describe accepted decoration such as ‘all ornament should be based upon a geometrical construction’. She includes a female figure in each of her pieces in an effort to feminise the classification and to subvert the idea of women being considered as decorative, domestic goddesses. I rather liked the lacelike quality of these two images I saw in Crafts magazine. 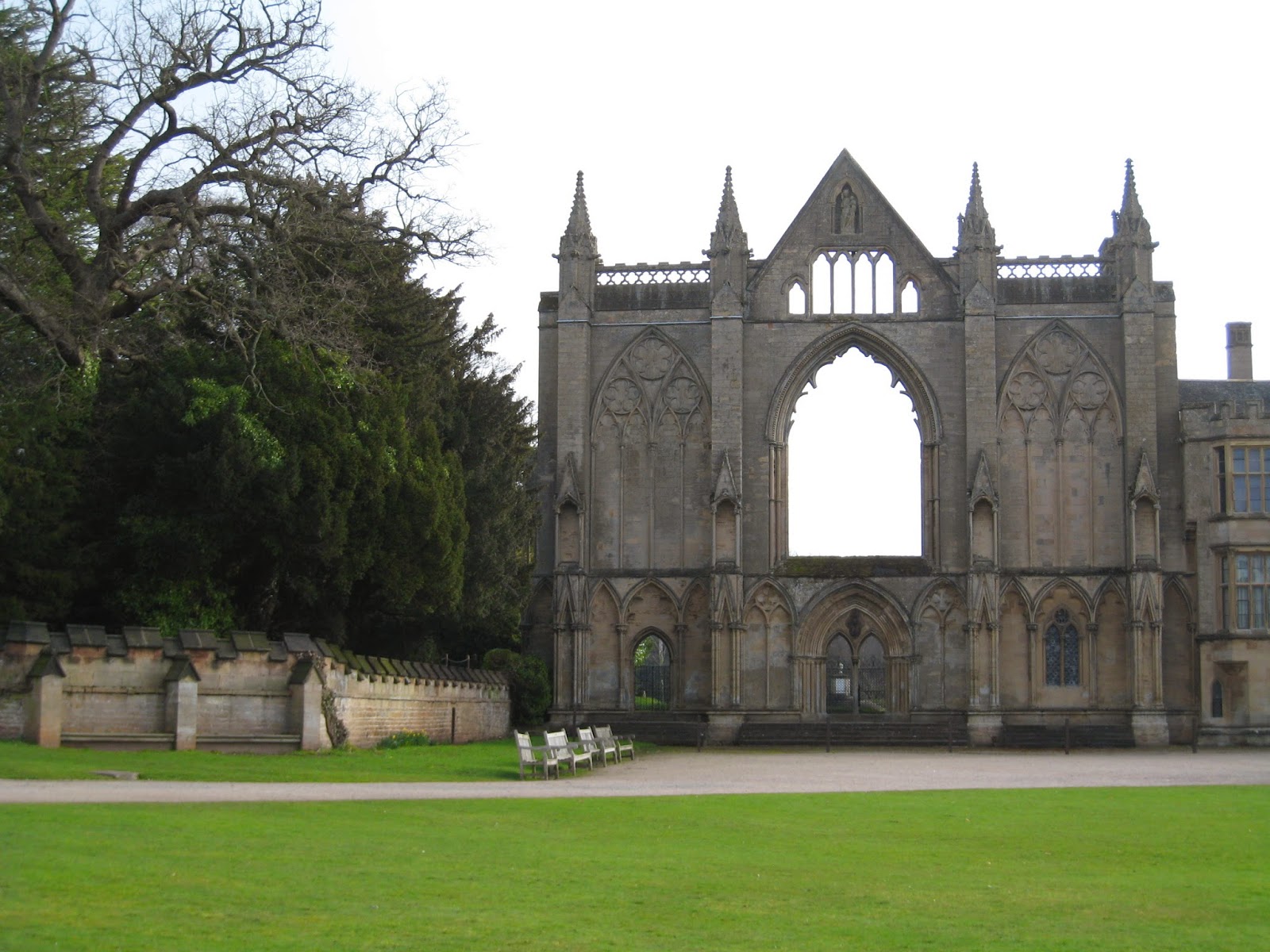 I had an excellent day last week looking at the collection at Newstead Abbey near Nottingham. It is a beautiful place and was the home of the Byron family until it was sold by the poet in the nineteenth century. The original building is magnificent and the grounds are sweeping, with a lake, waterfalls and more formal gardens. We saw a sample of the collection including, embroidery, lace, dolls, shoes and costume and were given an insight into the conservation process as well. It was a fascinating day.

A new twist on lace 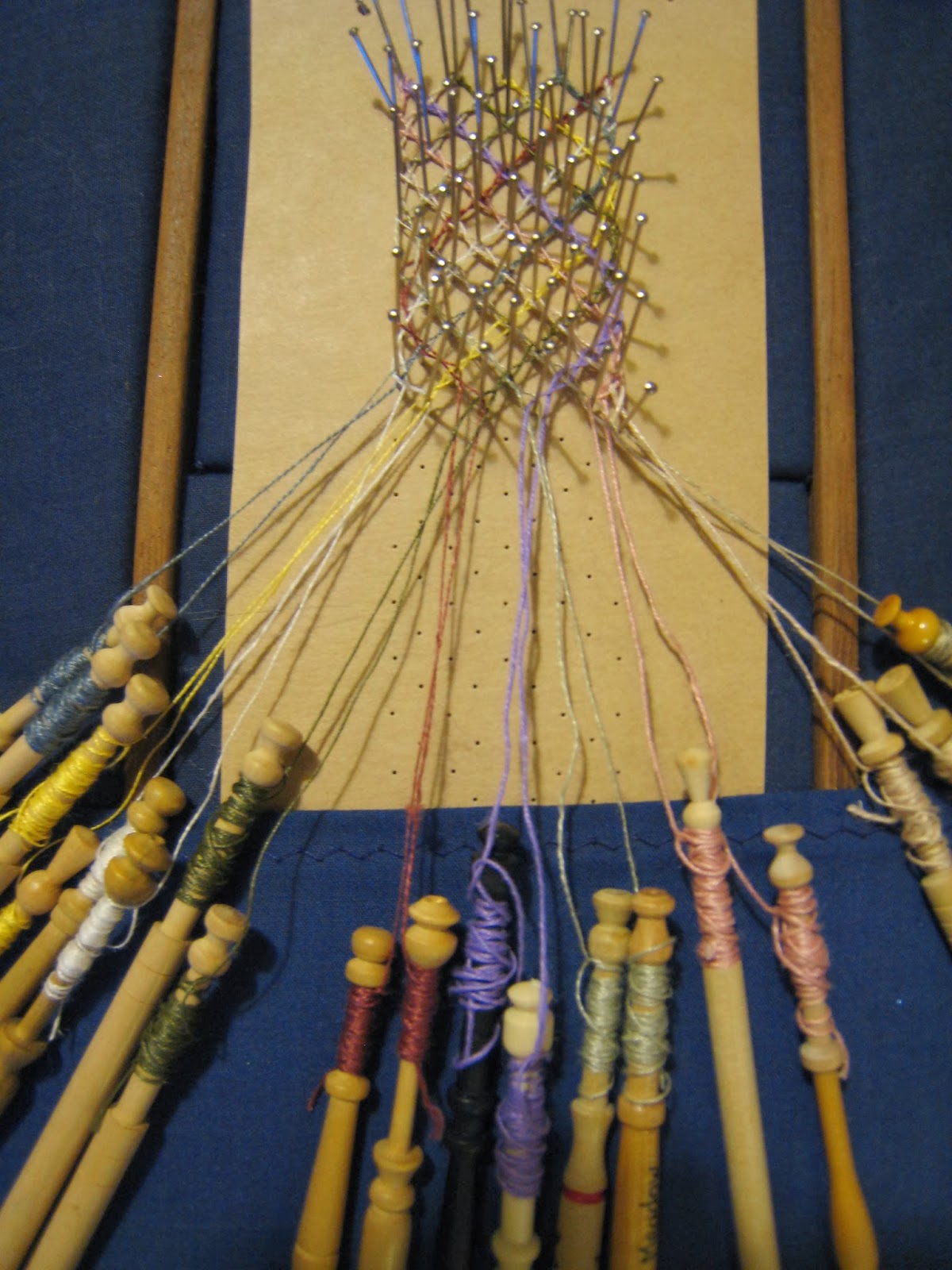 ‘A new twist on lace’ was the title of the workshop Gail Baxter and I did with students at Nottingham Trent University earlier this week. We had a great time working without traditional bobbins or pillow and using all sorts of different ‘threads’. The students were very innovative and tried out various combinations of stitches and yarns. Some of them also manipulated the shape of their pieces forming curves and fan shapes. We also took with us a couple of traditional lace pillows for them to try working on, and as you can see from the image above, several of them enjoyed working traditional half stitch, pin, half stitch net in coloured threads to show them how the threads moved through the work. It was fun working with the students and we hope it gave them a good idea of what can be done using lace techniques. 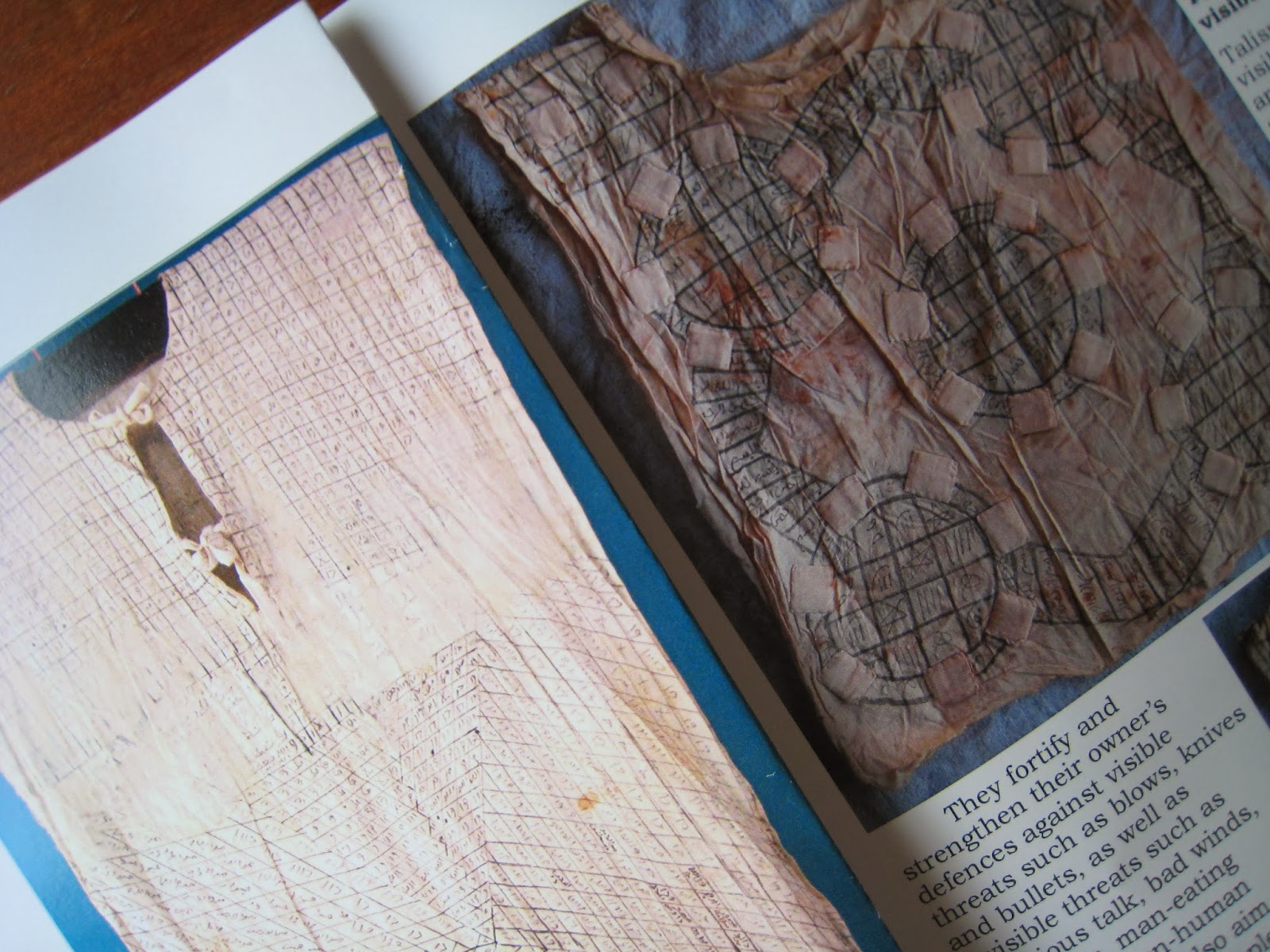 This interesting article about talismanic clothing was published in the recent edition of Asian Textiles. Alain Epelboin has studied these clothes from West Africa covered in talismanic writing which may be curative or preventative. Once the lifespan of the talisman is over, for whatever reason, it is abandoned and the collection he studied was acquired from workers who sort through refuse in Dakar, Senegal. Some of the clothes have writing on them, others have paper containing talismanic writing concealed within them. A selection was exhibited at the Institut du Monde Arabe in Paris last year.