Textile research at the V&A 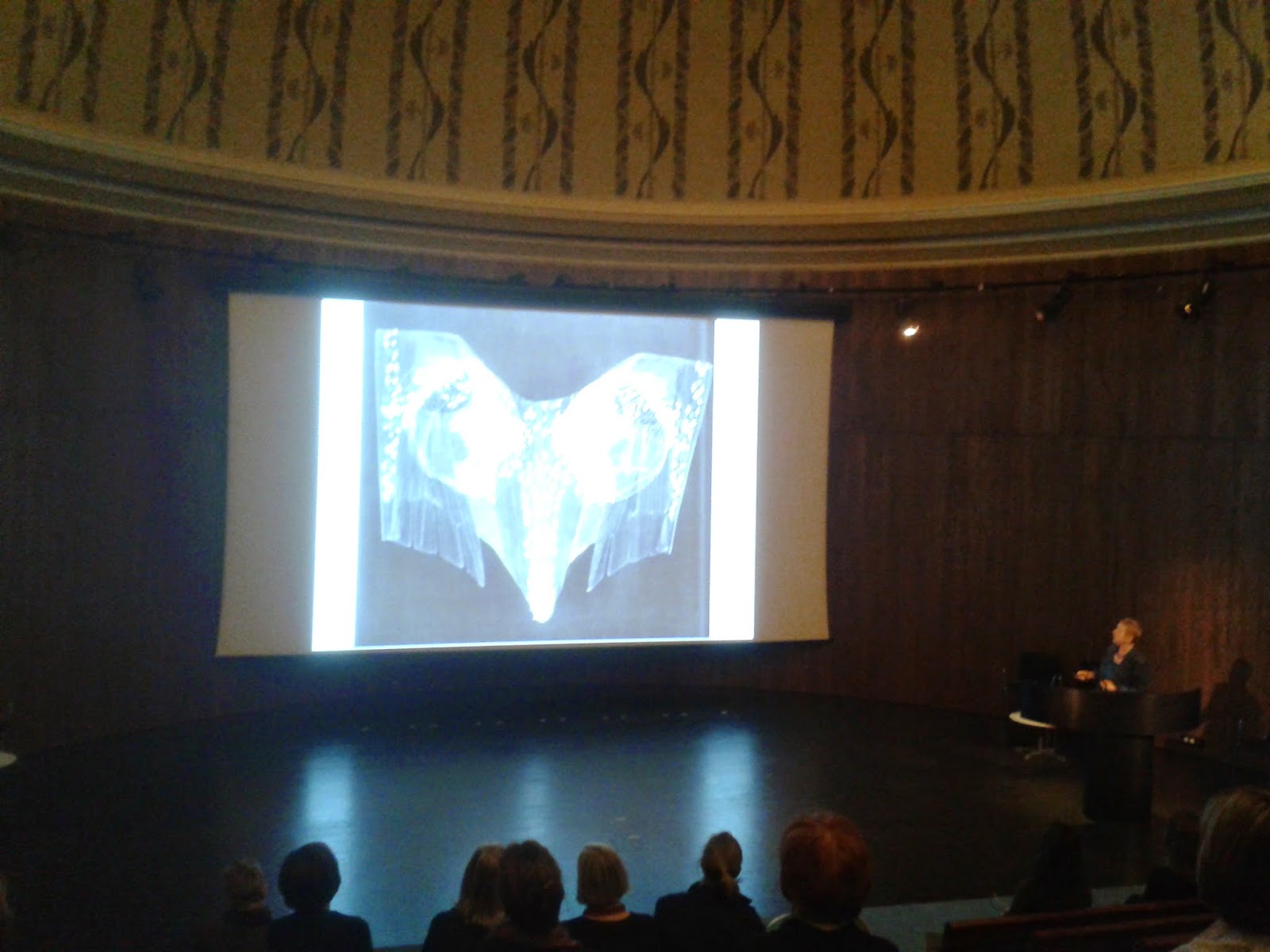 ‘A year at Clothworkers’ was a fascinating symposium about textile research at the V&A. Staff and researchers from the newly opened Clothworkers Centre, based at Blythe House, spoke about their work and their experiences over the past year. All the speakers were enthusiastic about their particular textile specialisms and we heard about radiographing seventeenth century clothing (image above); the use of historical textiles in contemporary fashion; Chinese, Indian, Moroccan and East Asian textiles; dragon robes; British Utility clothing; Persian carpets; and biography through clothing. We heard about the detective work required to link a lost portrait and a seventeenth century man’s costume and the serendipitous discovery of Kenneth Tynan’s driving licence in one of his jacket pockets. We were told how to access the collections and reminded that the online catalogue is the place to find accession numbers when requesting items for study. One of the advantages of the new facilities is that it allows space for several items to be studied and compared at the same time – not generally a problem with lace, but useful if you are researching carpets.
Posted by Carol Q at 06:11 No comments: 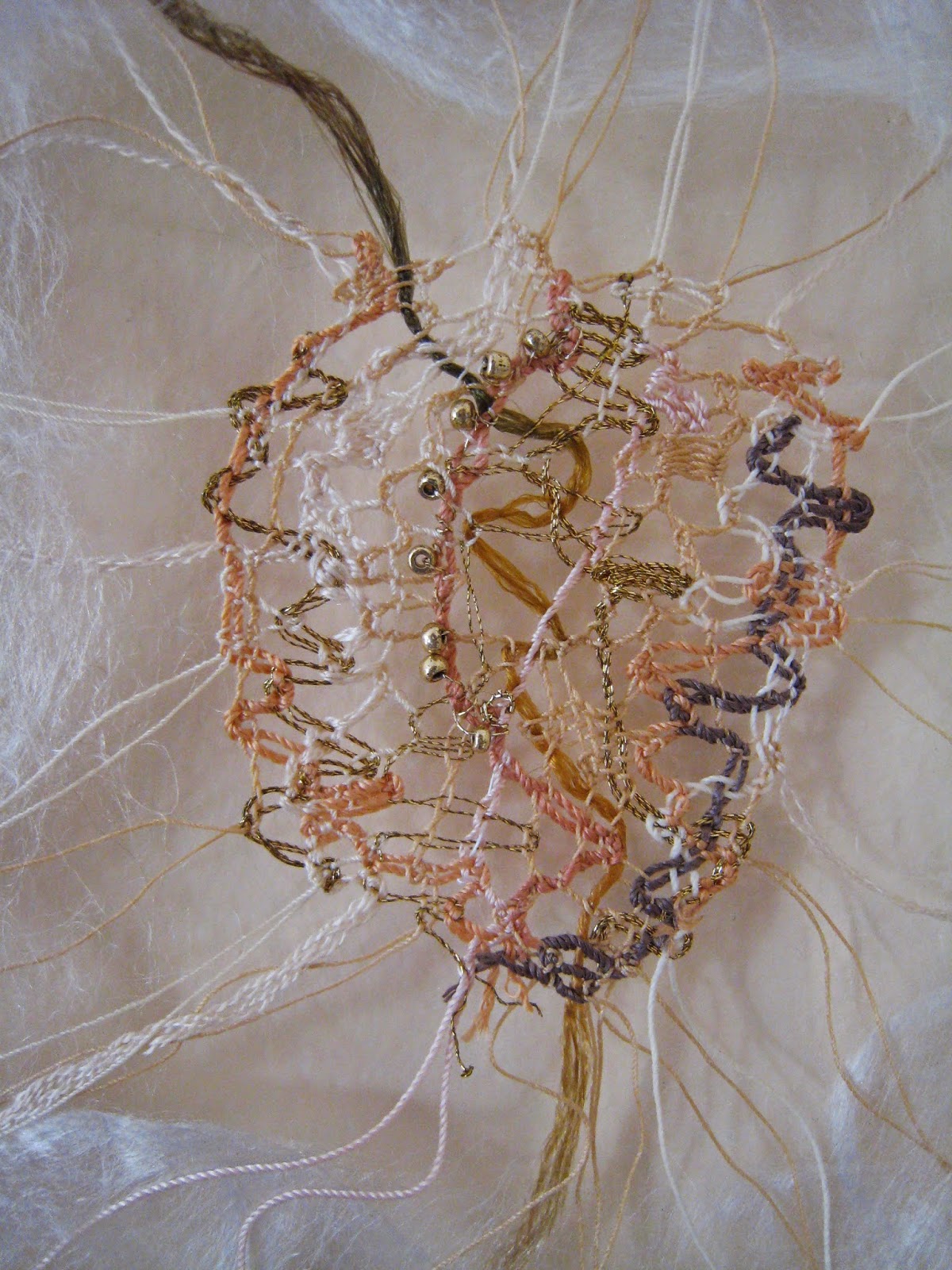 As part of my current research into the net curtain, I want to make some lace that conveys the idea of disease and the part germs played in the culture of cleanliness in nineteenth century women’s lives. I’ve decided to produce a strip of lace and incorporate it into a handmade curtain, the upper part of which will be made of silk fabric and the lower half of silk paper. The lace will lie on the boundary of the two materials to give the idea that the fluid silk material is gradually turning into a fragile, papery tissue, mirroring the idea of the disease taking hold but also the concept of the curtain clogging up as it traps the germs. As tuberculosis was so prevalent at that time I’ve decided to base my lace design on the bacterium responsible for the disease (Mycobacterium tuberculosis). The images I’ve collected so far show a series of capsule shapes. It’s nice to be incorporating biological ideas in my lace again, like the image above. My recent work has concentrated on social history so it’s interesting to combine the two themes. 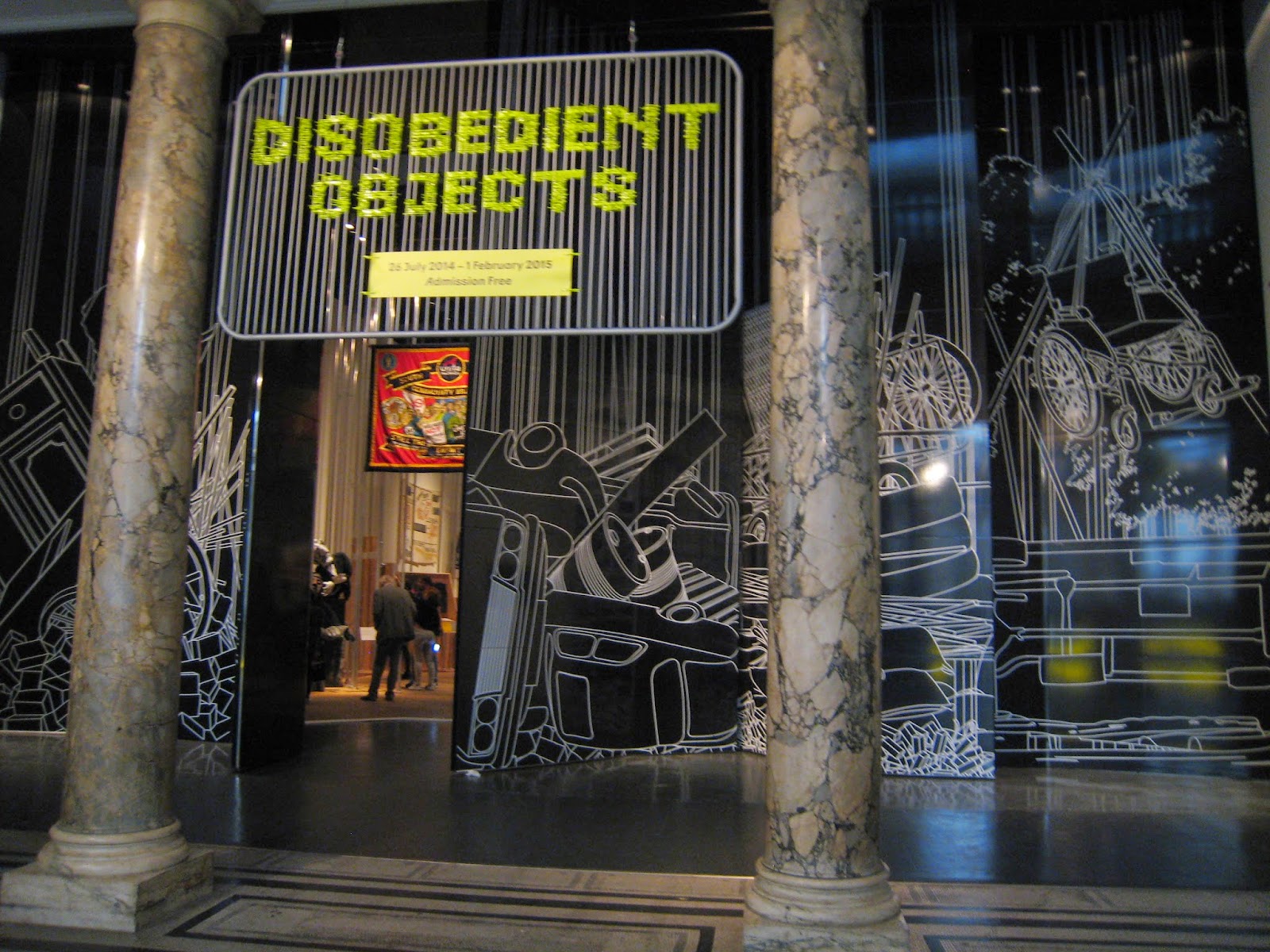 This exhibition at the V&A brings together a variety of artefacts designed or appropriated for protest. As the introductory panel states ‘Many of the rights and freedom we enjoy today were won by disobedience’. The textiles were what interested me most and they included Chilean arpilleras, handkerchiefs, banners and crochet, all made by women using traditional female skills. The arpilleras are appliqued panels, originally made to protest against the Pinochet regime in Chile. They were sold to provide funds for the protest and were initially dismissed by the regime as unimportant women’s ‘folk art’. 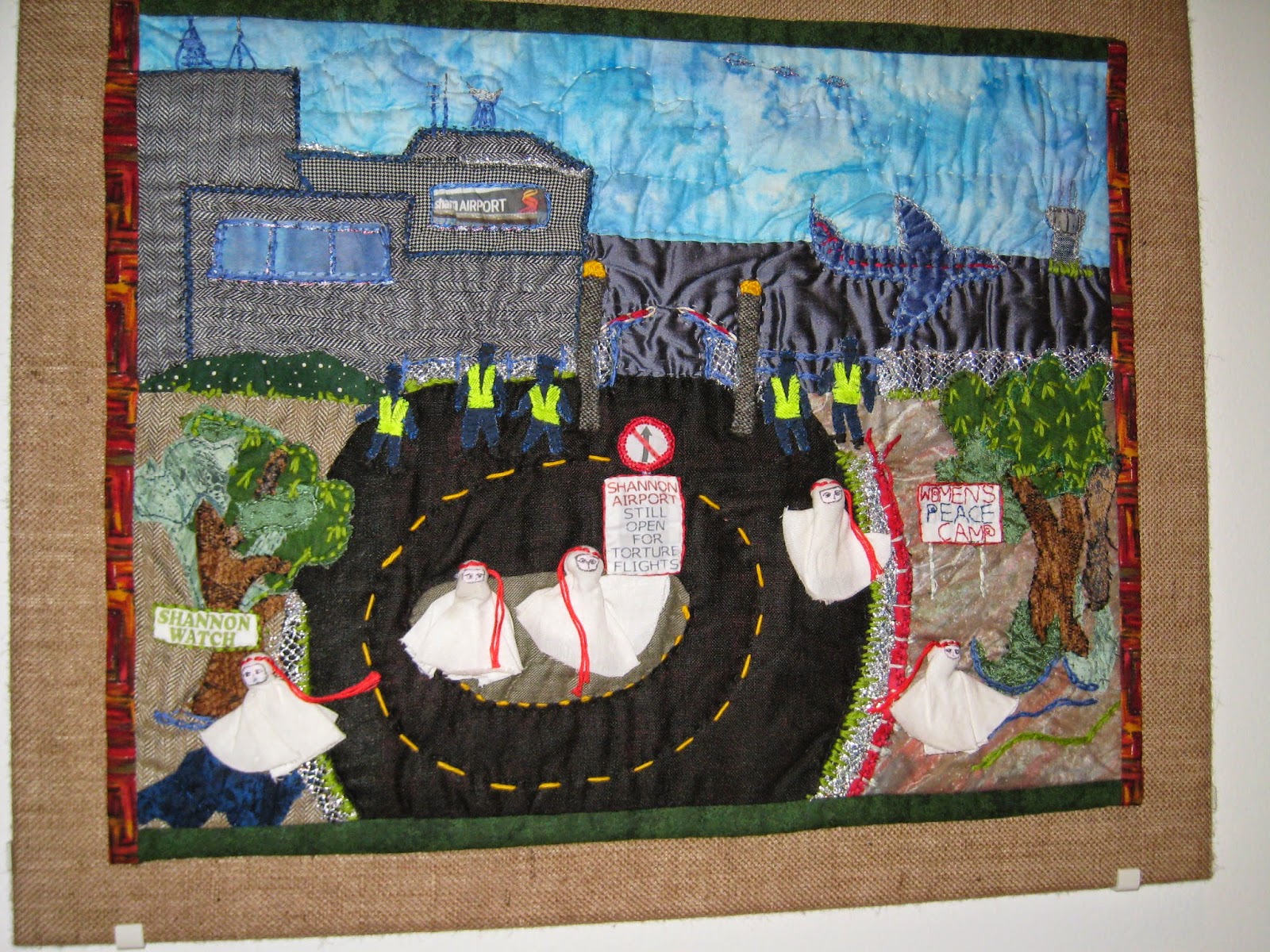 Women have since been inspired to use this technique as a medium for protest and the image above shows Deborah Stockdale’s ‘Shannonwatch’ a panel celebrating the peace activists who monitor the use of Shannon airport by the American military to move prisoners. The figures wear burqas in solidarity with Afghani women caught up in the fighting. 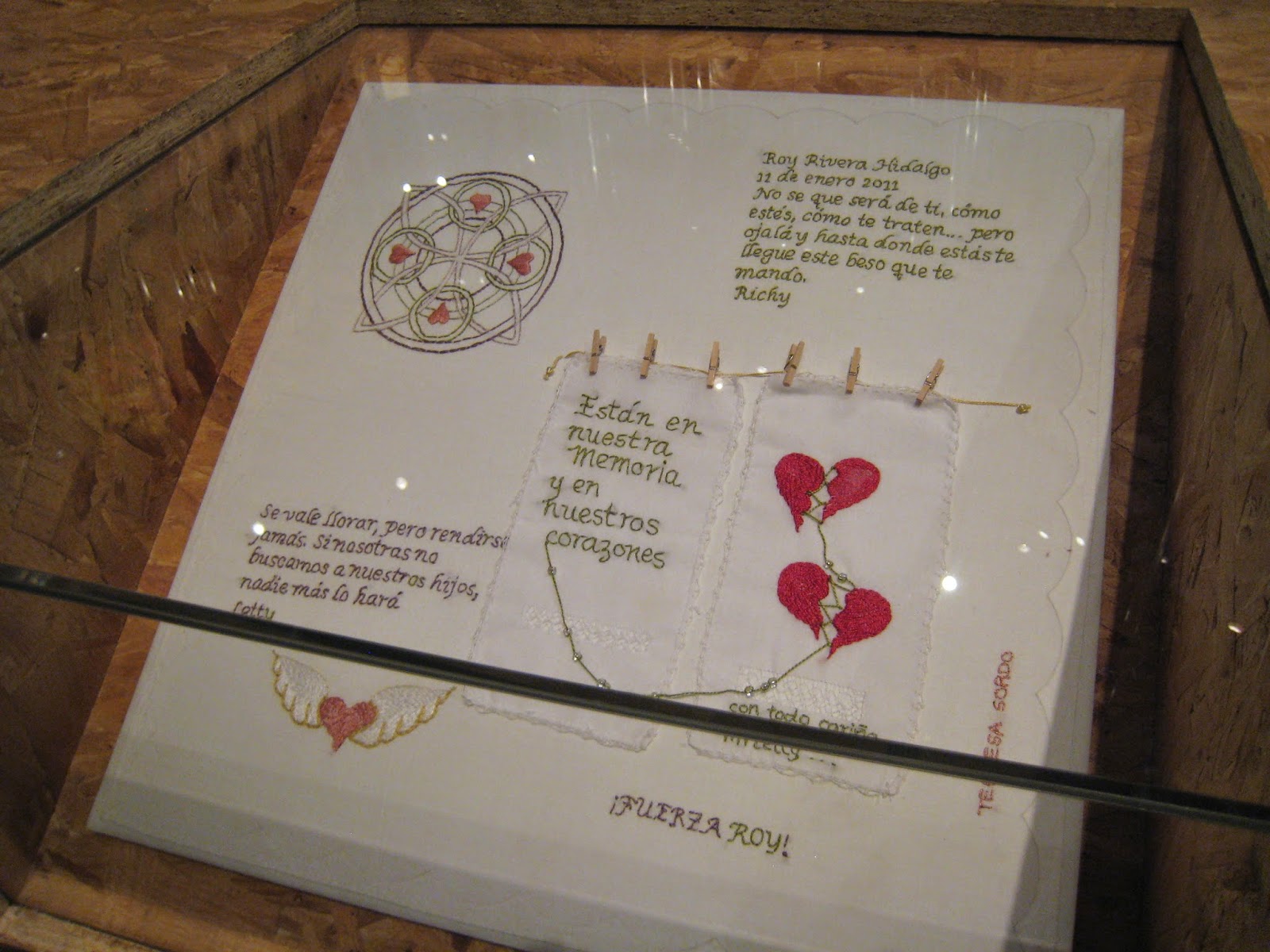 The ‘Handkerchief for Roy’ was made by the collective Bordamos Por La Paz in Mexico, with the mother of Roy Rivera, to commemorate his ‘disappearance’. He was kidnapped when he was 18 and, despite paying a ransom, his mother never saw him again. The collective make and display handkerchiefs to honour victims of violence and to shame the government into protecting its citizens more effectively.


I thought these two stitched pieces were moving examples of the way in which stitching can give women a voice and that by using their traditional domestic skills women can bring a particularly female perspective to 'disobedience'.
Posted by Carol Q at 07:05 No comments: 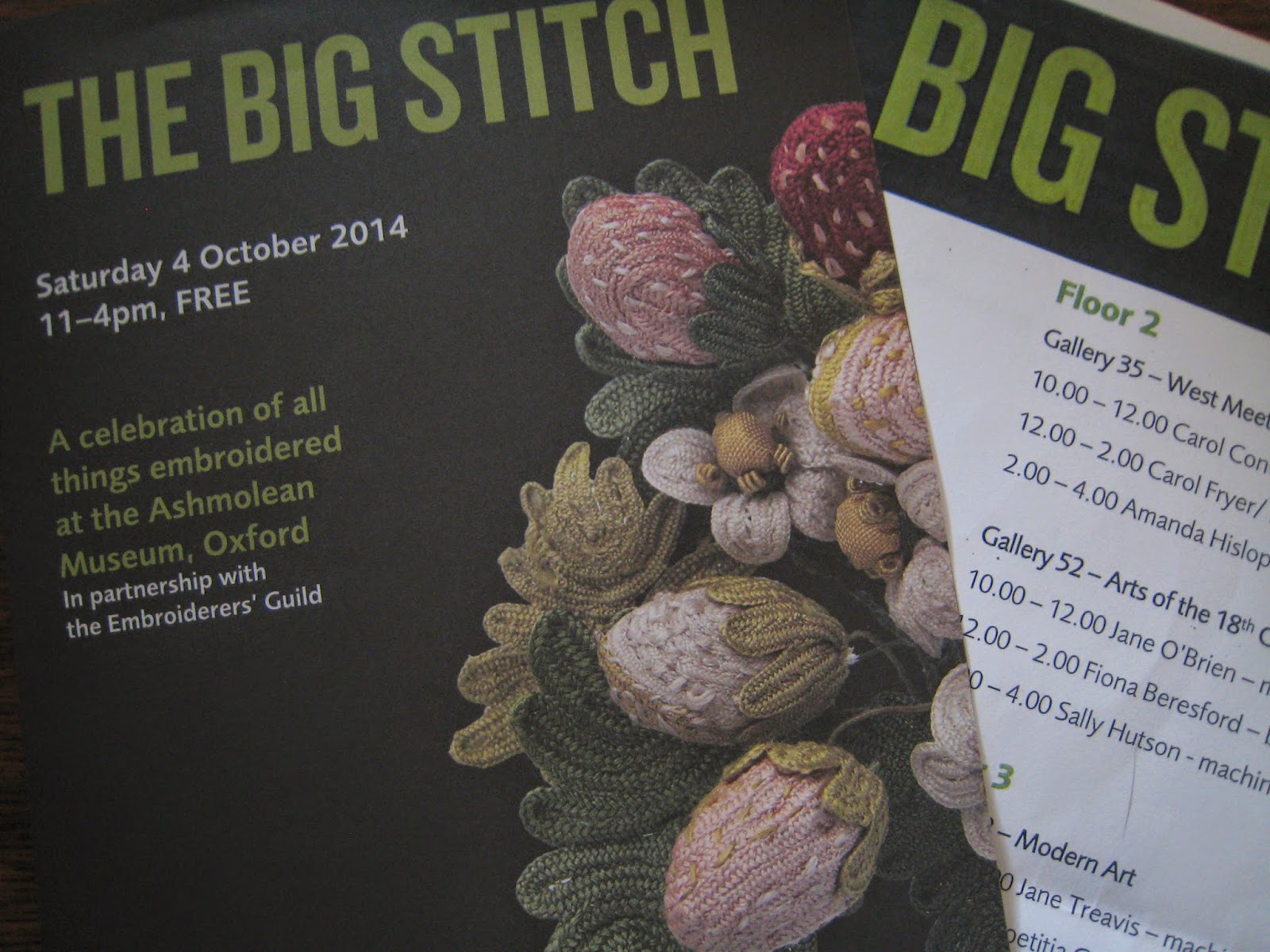 I enjoyed The Big Stitch day at the Ashmolean Museum on Saturday. There was plenty to do – lectures, gallery tours, demonstrations and workshops. I was lucky enough to book on Mary Brooks’ workshop on examining textile objects. This was linked to the ‘Eye of the needle’ exhibition (see my blog of 9 September), which Mary had curated, so was focused on seventeenth century embroidery. Mary gave us a checklist of key things to look for when studying textiles and we worked in small groups to analyse the artefacts – my group examined a woman’s bodice embroidered in silk – but we also saw embroidered pictures and samplers from the Ashmolean collection. The gallery tours in the afternoon were interesting as they revealed the various textile gems dispersed in galleries throughout the Museum. It was also interesting to see so many demonstrations of different types of embroidery and lace (the latter by Gaby Lloyd and Gail Baxter) and the public interest in them.
Posted by Carol Q at 07:15 No comments: