I’m spending an interesting day studying some lace designs by Harry Cross in the Lace Archive at Nottingham Trent University. Harry Cross is the designer of the Battle of Britain lace panel that I’ve been researching for the last couple of years so it’s very interesting to see some of his other designs. These are all more floral than the Battle of Britain panel which is much more figurative and are more typical of his work in general. I was pleased to see wheat ears on one of them which also feature on the famous panel. It’s also interesting to see the way he shades his designs and his use of different colours to achieve that. In some he indicates the type of stitches to be used but in others just shades an area and presumably leaves it up to the draughtsman to decide how to achieve that effect in stitches. Interestingly some of the designs are quite similar to bobbin lace in appearance, which I suppose is not unusual as lace designers studied old laces for inspiration. I’m certainly having an inspiring day studying these lovely designs!
Posted by Carol Q at 03:51 No comments: 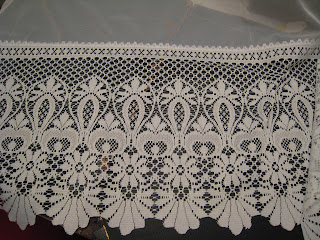 Having spent the last few weeks finishing off my Battle of Britain panels I’m having a change and spending next week doing some archive research. I’m going to Nottingham to study some of the archives relating to lace curtain manufacture held at the University of Nottingham and also hoping to spend some time in the lace archive at Nottingham Trent University looking at samples of lace curtain patterns and design. I’ve been searching online to see what the various archives hold but it’s difficult to know exactly what to order- some things seem promising but turn out not to be useful, while others turn out to be hidden gems. I’ve ordered a selection of material and hope it will be useful, or at least lead me on to things that are! I’m also going to the Museum of Domestic Design and Architecture in London to see some of their net curtain designs as well, so it will be a busy week.

Flowers and leaves in lace 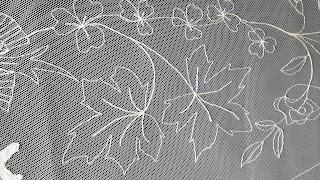 Last year, when I was designing my response to the Battle of Britain lace panel, I made a study of all the different leaves and flowers Harry Cross had used in his original panel. However, whereas Harry Cross had used them in borders to separate the images of the bombed areas of London and as adjuncts to the various air force badges, I decided to include them in my central panel. After much thought, I decided that the central panel would have a sweep of flowers and leaves going upwards, which would be contrasted with lines of aircraft sweeping downwards, above the image of St Pauls Cathedral. I started my upward sweep with the protea of South Africa, followed by acorns and wheat ears. I had originally thought the wheat ears looked like barley but on doing some research discovered that there are various types of wheat, including one with long whiskers! After them came the thistle for Scotland, shamrock leaves for Ireland, maple leaves for Canada, the rose for England, and daffodils for Wales. After the daffodils, the line of plants diverges to give the silver fern of New Zealand on one side and the wattle of Australia on the other. Just above the wattle is my addition to the panel – two poppies, which were not on the original but which I have added for remembrance.
Posted by Carol Q at 07:47 No comments: 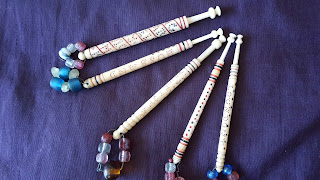 Many lace bobbins have a story to tell and these five are all concerned with love and romance. You can envisage a young man giving his girlfriend a bobbin inscribed ‘Love give me a kiss’ or even ‘Kiss me quick my lovely darling’. But you wonder what has upset the romance when you see ‘Love don’t be falces [false}’ inscribed on a bobbin. And ‘Wright [write] my altard [altered] true love’ brings to mind images of a lacemaker working at her pillow and expecting a letter from her boyfriend in the army or navy, which never comes. Let’s hope she eventually received a love letter from her absent true love. And what about the lacemaker who declares ‘I wants a husband’ – let’s hope she wasn’t disappointed when she found one!
Posted by Carol Q at 07:56 No comments: