Earth: Art of a changing world 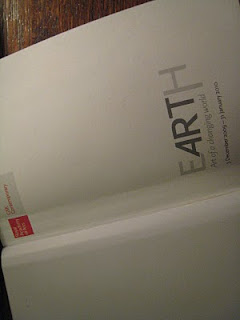 This exhibition at the Royal Academy brought together 35 artists to give a cultural response to the way that human activity is affecting the natural balance and physical cycles of the earth. I particularly enjoyed seeing several works I had read about but not seen before. These included Mona Hatoum’s Hot spot, Antony Gormley’s Amazonian Field and Cornelia Parker’s Heart of darkness. Hot spot is a stainless steel cage in the shape of a globe with the continents outlines in red neon lighting. Amazonian field consists of hundreds of clay figures packed into a room all looking towards the viewer. Heart of darkness is a hanging of shattered charcoal, the remains of a forest fire in Florida. I like Cornelia Parker’s work but this was so similar to Mass (Colder, Darker matter), which comprises charcoal retrieved from a church struck by lightning, that I felt I’d seen it before.

I thought Spencer Finch’s Sunlight in an empty room (passing cloud for Emily Dickinson), a large blue cloud made out of wrapped cellophane, was very effective. Darren Almond’s Tide, made up of 567 wall clocks telling the current time, was a clever way of making you notice the passing of time as you waited for the clocks to all move to the next minute. Yao Lu’s Spring city was a clever photograph of mounds of rubbish manipulated to look like an ancient Chinese painting. It made you look carefully and appreciate the way the Chinese landscape is being altered by pollution. Tracey Moffatt’s Doomed was a video collage of disaster scenes from films that were spliced together so well they appeared to tell a new story of their own.
Posted by Carol Q at 04:52 No comments:

Three by one symposium 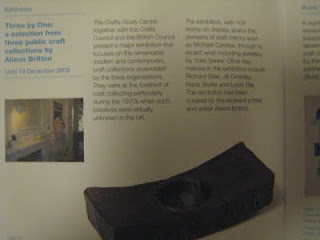 This short symposium was linked to the current exhibition curated by Alison Britton in the Craft Study Centre. She selected artworks from three collections for the current exhibition and discussed her rationale for choosing the items and how they were displayed. I found the talk by Sandra Alfoldy, comparing present day DIY craftspeople with studio craft practitioners, interesting and want to follow up her references to Dirt Palace and Sublime Stitching. Mark Bills curator of Watts gallery spoke to us about the gallery and its founding and Glenn Adamson summed up the proceedings.

In his conclusion, Glenn Adamson contrasted the views of history that had been presented as constraining or as a cushion or comfort area from which to move on. He highlighted the stories of craft, its individuality, temporality, repetitiveness and its relaxing nature. In the panel discussion, it was pointed out that textiles can be taken into the domestic environment but it may be more difficult for other crafts to operate in this DIY fashion. Glenn also said that in any ways it would be easier to make a case for collecting DIY crafts than fine art because that is the new wave.
Posted by Carol Q at 07:34 No comments: 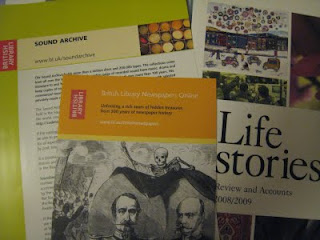 This was a day of talks, workshops and networking opportunities for art and design PhD students at the British Library to introduce the research materials available at the Library.

After a general introduction to the Library and its collections we attended two curator sessions from a choice of eight. The collections are vast and include art, music, British newspapers from 1600 to 1900, a sound archive, catalogues from auction sales, websites and patents and various guides to setting up your own business.

The first curator session I chose was Graphic Art because it sounded as if it would cover a wide range of material. We were shown some interesting antique books and paintings including an illustrated collection of the fortifications in the Kingdom of the Two Sicilies, drawings and etchings of Scotland and Surrey, and etchings of the colleges in Oxford. The curator explained that you should start your search in the integrated catalogue and make it as wide as possible. She guided us through several searches which emphasised how complicated the process of finding what you want can be.

The second curator session I attended was about the Oral History collection. I found this more relevant and interesting probably because we started by saying what we were all researching which gave the curator an idea of what we were interested in. My net curtain research appealed to him and he used that as a search example which was very useful for me. Several people were interested in conducting interviews as part of their research so they were given some tips and also told that the BL runs a series of workshops to help you get started. Most of the recordings have been collected since the second world war but the people being interviewed are all asked about their memories of their parents and grandparents so in that way the collection also deals with an earlier period. If the recording you want is not available for listening you have to order it which takes about 2 weeks. Many also have transcripts. The sound archive is also worth searching www.bl.uk/sounds