Veiled threats: the ambiguity of pins 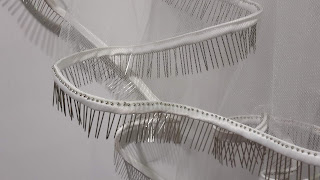 I love the ambiguous nature of pins – they are small, shiney and useful but have a sharp edge to them. Their attractive appearance masks a tendency to inflict hurt and pain randomly. Katherine Walker expressed it well in 1864 in her short story ‘The total depravity of inanimate things’, in which she humorously suggests that pins and needles, among other household objects, have a life of their own. She says ‘the similar tendency of pins and needles is universally understood and execrated, - their base secretiveness when searched for, and their incensing intrusion when one is off guard’. In ‘Pinned down’ the wedding veil I made fringed with pins, a detail of which is shown in the image above, they form a beautiful glistening fringe but on closer inspection reveal their true nature to comment on the sharp reality of matrimony. Interestingly Yvonne Verdier, in a study of folk tales in rural France, links pins to maidenhood, so they seem to be an appropriate edging for a white wedding veil.

Why do we make? 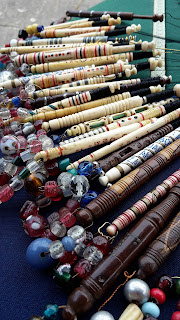 Why do we make? was one of the interesting questions explored at the ‘Craft(ing) the body’ conference held at UCA Farnham today. Although it wasn't the theme of the day it was a thread running through all the presentations. Professor Catherine Harper felt that there was a need to craft and that the interaction between the body and the thing being made was visceral. She commented that we don’t need craft but we desire it. Her keynote paper on ‘Chasing the impossible: crafting the intimate body’ compared the different approaches of female representation expressed in Judy Chicago’s Dinner party and Helen Chadwick’s Eat me, arguing that Chicago stylised and unified women as biologically feminine while Chadwick’s response was more personal and placed femininity between the biological and the social allowing multiple definitions. Interestingly the artists Gayle Matthias and Karina Thompson, who work in glass and textiles respectively, both said that it is only as mature artists that they have had the confidence to produce, exhibit and verbalise personal autobiographical work. The potter Gareth Mason noted that we make sense through craft, while artist Fiona Curran argued that craft is a form of discovery and curiosity. Daniel Fountain spoke of his practice, crafting a queer society in the form of nests from salvaged materials. The ceramicist David Jones speaking about his own practice noted that giving matter form is significant. He quoted Richard Sennett’s words that ‘making is thinking’ and Hannah Arendt’s idea that craft requires a narrative rather than mindless making. Jones argued that craft is not art or a subsidiary of art but lies parallel to it. During the question time many in the audience said they felt compelled to make, others said that they made because they had ideas to express and disseminate. Many agreed with Jones that what we can make goes beyond what we can see and thus produces nuanced layers of meaning. 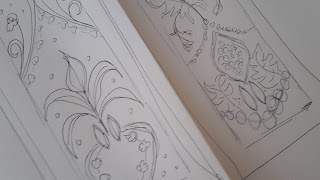 I’ve been busy studying the lace designs of Amy Atkin who claimed to be the first female designer of Nottingham machine lace. The reasons are twofold, first I want to do some academic research into her life and her designs, and second because I’m planning a practice-based response to her designs as well. The format for my own lace designs will be long thin rectangles so I’ve been trying to work elements of Amy’s designs into that shape and you can see my initial thoughts in the sketches above. Studying Amy’s designs, which are mainly deep valances or curtains rather than strips of lace, suggests that she designed a main focal element for the base of the lace and worked upwards. She favours designs that incorporate flowers and foliage, whether this was her preference or the favoured style of the time I don’t know. Some of the designs also have an Art deco feel to them which would have been a new influence at the time she was designing in the early twentieth century. I’m enjoying trying to get the feel of her style and find her flowing style of design is easy to work with and lends itself to handmade as well as machine made lace.

Needle lace sampler of Susanna and the Elders 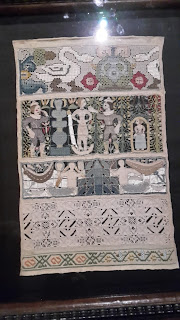 I saw this lovely needle lace sampler in the Ashmolean Museum in Oxford over the weekend; it is part of the Feller collection. The subject is the Biblical story of Susanna and the Elders, in which two lecherous Elders watch Susanna bathing and then accuse her of promiscuity. She is condemned to death until the prophet Daniel proves her innocence and the guilt of the two men. What intrigued me about the sampler was not the theme but the variety and technical skill of the different panels of needle lace. The top band drew my attention because from a distance I thought it was filet lace but it is actually a type of pulled work based on the grid of the fabric. The second band is much freer needle lace with some applied pieces and beads, although still maintaining the background grid of the underlying fabric. I love the subtle shading in the leaves, and what looks like two squirrels in the tree. The attitudes of the people in the story are beautifully depicted too – Susanna is quite rightly indignant at having her bathing interrupted. Originally the water would have sparkled and the beads in the pool would have glittered making the scene appear quite three dimensional. 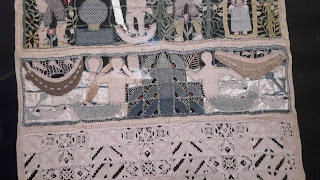 The third layer also keeps the grid but includes needle lace mermaids and boats and a central pattern that has an Art deco look to it and includes some tiny coral beads. The next layer is white cut and drawn work on a very fine scale and the final band is counted thread embroidery in a border pattern of lozenges and acorns. The whole piece is beautifully designed and made; it dates from the late 1600s. 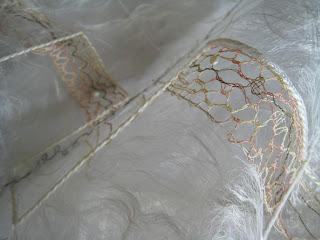 I decided to depict the sleep cycle in bobbin lace and silk paper as they seemed appropriate media to use. I thought the silk paper would represent the unconscious dreamlike state of sleeping while the random lines of the bobbin lace show the way the mind flits from idea to idea during the dream stage of sleep. I based the work on a typical graph of the human sleep cycle, which I copied in a coarse thread. I made rectangular areas of random bobbin lace to represent each of the dream phases and combined them with the thread graph. The silk paper was worked round all of them to represent the unconscious state from which they emerge and to act as a practical binder to keep them all in place. The final piece is an ethereal dreamlike hanging that wafts gently in the breeze.