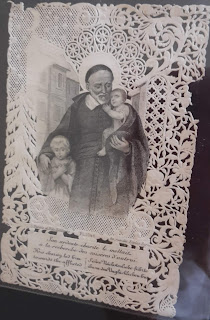 I saw an exhibition of these lace-edged devotional cards in Bruges last year. This one was produced by Turgis of Paris, probably in the nineteenth century, and depicts Saint Vincent de Paul and the children of charity. The Turgis company printed many types of cards celebrating different saints and the holy family; they were printed in black and white with a surround of punched out lace. The company also produced cards to celebrate personal life events, such as first communion. Most have a prayer on the reverse and were designed to be kept in a prayer book or bible. I like the way several different lace designs are used in this example and especially the way the stars, moon and tree are depicted on the left hand side – they made the scene seem quite Christmassy! 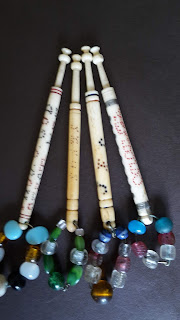 I’ve been trying to find some antique Christmas lace bobbins for the festive season but have had no success. Many current bobbin makers produce bobbins celebrating Christmas but I have found no old ones and neither T L Huetson nor the Springetts mention them in their histories of lace bobbins. Both sources describe some religious bobbins and Huetson does record a bobbin inscribed ‘Easter’ which he thinks was given as a gift. Many are inscribed with Mary and Joseph but these could also be commemorating friends and family of the lacemaker as they were popular Christian names. I do have one inscribed Jesus though (see the pic above). For most lacemakers religion would have been an important part of their lives, shaping the calendar of the year with celebrations such as Easter and Christmas, but also their own personal lives with christenings, marriages and burials. Many would have followed nonconformist Christian doctrines which emphasise a personal relationship with God, hence the bobbins in the image with the messages ‘Thou O God seest mee’ and ‘Jesus for me died’. Other popular inscriptions were ‘God is love’, ‘Love one another’ and ‘I love Jesus yes I do I do’. I was surprised not to find any mention of Christmas bobbins especially as the Victorians keenly celebrated Christmas and many nonconformists wrote the carols we now sing at Christmas. Perhaps the gift of a bobbin at Christmas was considered unsuitable because it was a working tool and Christmas was considered a day of rest, like a Sunday. Or perhaps there was no spare money to buy bobbins at Christmas time. The nineteenth-century bobbin makers certainly don’t seem to have them in their general stock so there was clearly no demand for them. 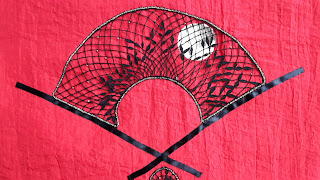 Just to show that my interest in Japan and things Japanese goes back a long way I thought I’d blog about this Japanese lace fan I made for City and Guilds many years ago. I remember researching Japanese patterns for kimono fabric and finding one depicting weeping willows, on which I based this design, and another of fan shapes which inspired the idea of producing a single fan as a hanging. The leaves and stems are all lace plaits and leaves, with four plait crossings where they intersect. I also added small gold beads at intervals to catch the light and add some highlights. The golden full moon was also inspired by another kimono fabric. The sumptuous black, red and gold colours epitomised Japanese style to me and were picked out from the clothing of some Japanese dolls in my collection. As part of the C&G exam I remember producing design boards to accompany the lace with all these samples on them, as well as showing the various stages of the design process, stitch samples and images of the lace being made. It was a lot of work but a good exercise in recording every step and formalising the process of designing. I learnt a lot from it - it’s a great shame that C&G in lacemaking no longer exists.