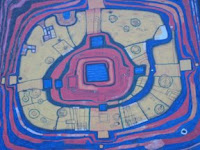 We saw this exhibition of the work of Hundert Wasser in the Art Museum in Budapest. He was interested in the relationship of the built environment to nature. For example he didn’t agree with the repainting of walls because he felt that patches of dirt created organic patterns that lent a unique design to exteriors. He lived from 1928 to 2000 and was influenced by Klimt. His works use basic colours and designs in squares and circles. He used a variety of media including silk screen printing, tapestry, wood blocks and graphics.
Posted by Carol Q at 08:37 No comments: 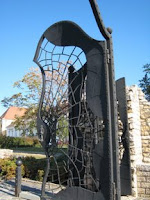 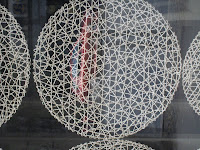 Many of the buildings in Budapest are beautiful with art nouveau designs although many look quite run down. There are statues throughout the city and these magnificent gates at the royal palace. Hungarians produce a type of ceramic with very lace like edges – like a paper doily in porcelain, which they use to make ornate bowls and plates. The circular lace pictured here came from the Villeroy and Bosch china shop in Andrassy Street.
Posted by Carol Q at 08:31 No comments: 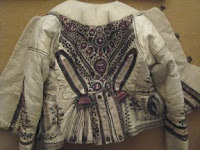 We visited this grand museum and eventually found the permanent collection of Hungarian life tucked away down several corridors. The peasants in Hungary were only freed in about 1840 so life was hard for many.
We saw interesting costumes, embroidery and leatherwork. There were also many items of daily life including farm implements, cooking utensils and furniture. 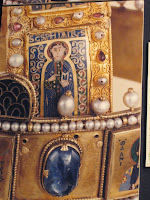 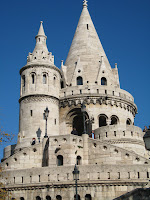 We spent the weekend in this lovely city on the Danube with a castle on the hill. Lots of things to see, including the churches of St Matthias and St Stephen; the first full of Pre-Raphaelite style paintings and the second baroque and very ornate with lots of gold leaf. We also saw the parliament, Heroes’ Square, the castle and the fishermen’s bastion. We had a boat trip on the Danube and visited St Margaret Island with its lovely Japanese garden and ruined convent. We visited the thermal baths in the Gellert Hotel and swam in the Art Deco swimming pool. In the evenings we went to a concert in a small gilded hall and listened to a choral performance in a local church.
Posted by Carol Q at 08:22 No comments: 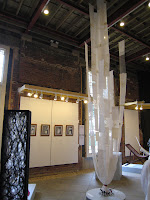 I spent Sunday 14 October at Highcliffe Castle, Dorset, with our exhibition Rhythms and Cycles (see September blog) demonstrating lacemaking and answering questions from the public. It was not a very busy day but there were some interesting comments in the visitors’ book including ‘Absolutely gobsmacking’ from Gil Bird and others saying the exhibition was stunning.
Posted by Carol Q at 01:50 No comments:

Green is the new black 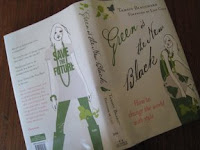 I found this book by Tamsin Blanchard in the local library – she was on the TFRG question time panel last week. She explains the principles of ethical fashion, from why it matters to how to do it. It is also full of useful websites. For example those for Borovicks, Kleins, V V Rouleaux, Button Queen and Sew Hip. She also gives some sites about knitting and sewing: Sweet, Loop, Barley Massey and Hip knits. Also some free designer patterns: an Alexander McQueen kimono jacket and one from Martin Margiela. The textile environment design website also gives lots of leads to other interesting green websites.
Posted by Carol Q at 01:38 No comments: 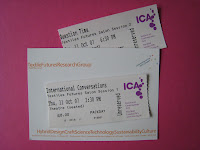 The TFRG presented an Eco textile design salon at the ICA on Thursday 11 October. The afternoon session was a series of four conversations between Rebecca Earley and Natalie Chanin; Mo Tomaney and Elaine Jones; Sandy Black and Christoph Bergmann; Carole Colet and Maja Kuzmanovic. The evening meeting was based on the Question Time formula. The panel consisted of Tamsin Blanchard, Kindley Walsh Lawlor, Lynda Grose, Carole Collet, Clare Brass, Rebecca Earley and Kate Goldsworthy. I got lots of useful references and websites to follow up.
Posted by Carol Q at 10:34 No comments: 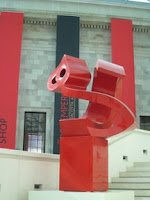 Lovely exhibition at the British Museum showing ceramics, metalwork, textiles, wood, bamboo, lacquer and dolls from Japan. In 1950 the Japanese government created a law for the protection of cultural properties. These can be craft objects or music and dance. Holders of these skills are designated ‘Living national treasures’ and their work is promoted by the Agency for Cultural Affairs. We saw some lovely textiles, both woven and printed kimonos and woven obi sashes and a short film of a maker producing block printed fabric for a kimono. The overwhelming impression was of simple elegance.
Posted by Carol Q at 10:29 No comments: 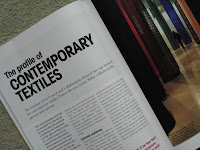 Context and Collaboration is a series of seminars that set out to provide a forum to investigate strategies for museums, art galleries, higher education institutions and professional practitioners to collaborate to increase the profile of contemporary textiles.

It is difficult to find high profile venues for contemporary textiles despite the large potential audience. There are few opportunities in the UK to buy contemporary textiles and gallery owners find it difficult to assess their ‘enduring significance’ because there is no market for them. One idea to encourage collaboration is the creation of a textile specific venue, although this could lead to ghettoisation. Another is the development of a champion - either a person or group of galleries – that would encourage collaboration and bring together buyers and sellers.

The project director was Lesley Millar and an article on The profile of contemporary textiles is published in Embroidery Sept 2007 pp 32-35.
Posted by Carol Q at 06:23 No comments: 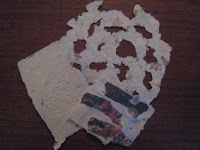 Westhope is a group of contemporary lacemakers who meet annually at the end of September for a weekend at Westhope College. This year we had a day’s workshop on papermaking with Bobby Britnell. I gave a short presentation about our exhibition at Highcliffe Castle. Gail Baxter talked about our work with Sonumbra and Gil Dye talked about her lacemaking trip to Japan. We also discussed the work we will be showing at our group exhibition at the Knitting and Stitching Show in 2008. Ann Wheeler is the coordinator for the exhibition and Gail and I will help her set up at the NEC and Alexandra Palace.
Posted by Carol Q at 06:17 No comments: 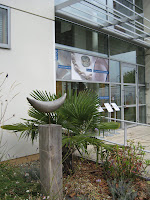 Access to the Centre's collection is by appointment and 1 month's notice is required. For more information contact the Collections Manager jvacher@ucreative.ac.uk or phone 01252 891452. Some useful websites for associated collections are www.vads.ahds.ac.uk/collections and http://www.archiveshub.ac.uk/
Posted by Carol Q at 07:37 No comments: 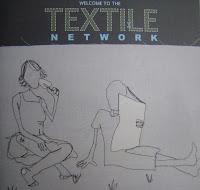 The Textile Network profiles the work of staff and students at the Cumbria Institute of the Arts. Mitch Phillips gave a talk about the site at the ETN conference.
Posted by Carol Q at 05:58 No comments: 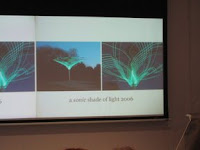 Rachel Wingfield from Loop talked about responsive textiles. She discussed Sonumbra – the umbrella project that Gail Baxter and I were involved in. Then described Loop’s new project at Kew and one with scientists at Cambridge.

Marie O’Mahoney (co-author of Techno textiles 2) described a lace project she undertook in Australia. The aim was to produce modern ‘lace curtains’ for people living off Sydney harbour. Digital imagery of handmade lace was sandwiched between two layers of electrochromic glass. At a flick of a switch the glass could go from transparent to opaque.

Janne Kyttanen showed us how rapid prototyping works and can be used commercially. He showed us examples including clothes ready formed complete with zips, bags, lighting products and jewellery. Larry Preusser described digital modelling for clothes and showed us an amazing video of virtual cloth draping over a ring.
Posted by Carol Q at 04:00 No comments: 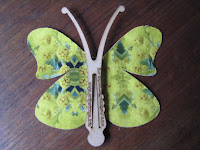 We were given an introduction and tour of the Digital Manufacturing Centre at the London Metropolitan University. They have facilities for rapid prototyping, laser cutting and digital printing. The Centre is part of Metropolitan Works which offers workspace access, offices and business support on a pay as you go basis. We were given a laser cut butterfly as a sample.

In the evening we went to the private view of ‘On the fringe’ an exhibition of research led digital and craft practice by academics from the University.
Posted by Carol Q at 03:35 No comments: