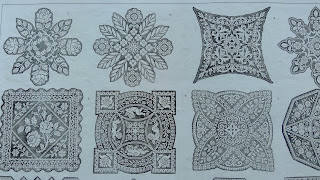 I was lucky recently to buy a lovely book of filet lace designs. It’s called ‘Le filet ancient au point de reprise’ and it was published in Paris; unfortunately it isn’t dated but filet lace became popular in the late nineteenth and early twentieth century. It is obviously one of a series and no instructions are given so the purchaser was expected to know how to work the designs. The information about how to make the net and work the reprise stitch used for all the designs could have been obtained from books on domestic crafts, many of which were available at the time. However, there are recommendations for the type of thread required to make the net and carry out the embroidery, depending on the number of squares required per centimetre. I’ve come across several of these design folios and they show how popular filet lace was. The designs can also be used for cross stitch and indeed any craft work based on a system of linked squares. The image shows how complicated some of these designs were and also how well the designers have achieved flowing lines even when working on a rigid grid format. 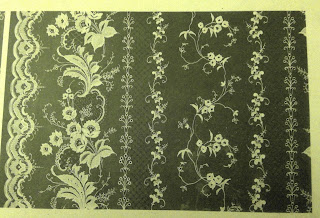 I’ve had a good week researching lace curtain designs both in the Lace Archive at Nottingham Trent University and in a private collection of designs. Unfortunately most of them are not attributed to the designer or dated and for many of them it’s even difficult to know who sold them. The image is of a design by Marcel Tuquet and it comes from a folio of his designs published by Christian Stoll of Plauen. The folio isn’t dated but they are all large bold designs which were fashionable at the end of the nineteenth century. Compilations of images like these were sold to lace and textile manufacturers as examples of good design and this folio is known to come from the studio of a lace producer. The idea was that they were used as inspiration and these pages are all marked with pencil and ink suggesting they were well used and studied. 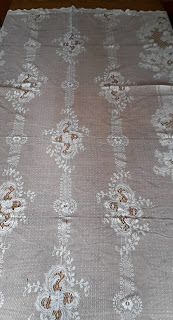 I’ve been writing an article about lace curtains this week. It’s mainly about a collection of curtains I’ve been studying in an archive, which were all produced at about the same time but for different markets. It’s been interesting finding out about the different lace curtain fashions and the associated window styles that influenced them. It seems that curtain styles do not change very quickly and many designs continued to be manufactured for several years. It’s also been interesting to see how some curtains have been altered, often to shorten them for use at smaller windows probably in the children’s or servants’ rooms when they were no longer fashionable for the main rooms of the house. I’ve also been looking at the factors influencing curtain styles including magazine articles, books dealing with decorating and managing a home, and even the international exhibitions that began with the Great Exhibition of 1851. 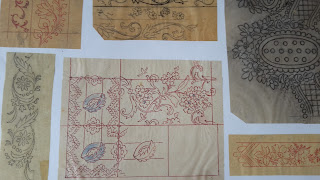 I had an enjoyable day earlier this week looking at some lace sample books with two friends at an auction viewing. Lace sample books seem to fall into three groups, but they all seem to be large, thick and heavy! They are all produced by lace-making companies either to record their own products or to inspire their designers. The first type include samples of the lace made by a producer and often show a variety of laces based on a similar design. Some of these are for the producer’s own use but others seem to be designed for salesmen to take to buyers to show the different laces for sale and these may include prices and names. The third type of sample book includes snippets of lace of all different types, both handmade and machine made, glued onto the pages and these are generally inspiration books for the lace designers. The image shows some samples of designs that were put together as inspiration and includes lace and embroidery designs.