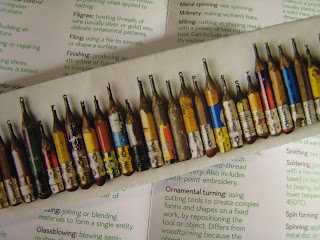 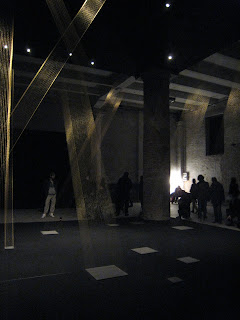 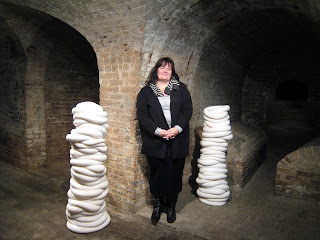 This is a solo exhibition by Catherine Dormor at the St Pancras Crypt Gallery. It focuses on the structure and behaviour of textiles to explore the link between touch and sight as registers of perception and is part of her PhD research.

St Pancras Crypt Gallery is a large gallery containing many different sized spaces, nooks and crannies and Catherine has used the space well; it felt full without being crowded. The exhibition includes sculptural work and hangings, as well as video and audio to express properties of cloth such as oscillation, caress and shimmer. The work varies from the detailed properties of cloth in the ‘within’ series of lightboxes, which focuses on individual threads, to the overall feeling of that cloth against skin in ‘skin-flow’ to express the perception of cloth. The image shows Catherine with ‘becoming’ in the main vault of the gallery.

The eyes of the skin 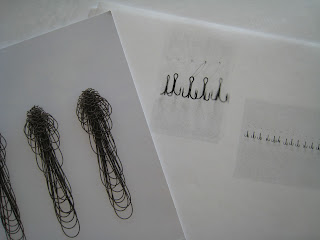 This is Susie MacMurray’s first solo show and it is being displayed at Agnew’s Gallery in London. She transforms common objects such as wine glasses, gloves, feathers and hair into beautiful sculptures that are not quite what they seem at first glance and comment on the human, generally the female, condition.

‘Maiden’ is a traditional glass fronted picture frame enclosing, or trapping, a line of fish hooks attached to the background by human hair. This cleverly references so many aspects of maidenhood, the loops of hair, the fine hooks waiting to trap or be trapped, the idea of plenty of fish in the sea and the fact that the entire line is identical and itself trapped behind glass.

‘A mixture of frailties’ also addresses the female condition. A white wedding dress made entirely of rubber gloves stands serene as it billows out into the room. The fingers of the gloves form a beautiful scalloped edge to the skirt, but what a cautionary tale they suggest. This has resonances with ‘Widow’ another dress by MacMurray presently on show in the Power of Making exhibition at the V&A. By contrast, ‘Widow’ is made of black leather and incorporates 43 kg of long dressmakers’ pins in fine rows forming glittering sharp fringes down the length of the dress.

The show at Agnew’s also includes some of MacMurray’s pen drawings of hair nets, which she has used in previous installations. These are large, well over a metre in both dimensions, and beautiful in their detail.

What appeals about this exhibition, and in fact all of MacMurray’s work, is that the work is beautiful but has sinister undertones, the familiar becomes strange and we are seduced and repulsed at the same time.