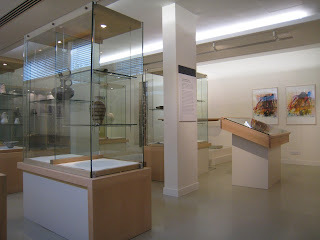 This mixed exhibition at the Crafts Study Centre makes connections between donors, trustees, teachers, pupils in fact anyone with a link to the Centre. At a talk by Pat Carter, who selected the exhibits, it was described as a way of talking about the Centre’s collection and exhibiting pieces from it. It includes calligraphy, ceramics, textiles, woodwork and monoprints. I enjoyed the beautiful weaving by Tim Parry Williams, Nao Fukumoto and Ethel Mairet, Stella Benjamin’s bright yellow rug and Peter Collingwood’s macrogauze, but my favourite textiles were Ann Richards’ clever necklaces, which are woven flat and do not take on their complex folded form until they are exposed to water. The connection between Lucie Rie and Issey Miyake was new to me. After seeing her work, he organised an exhibition of her ceramics in Tokyo and also used her ceramic buttons in his fashion designs. Some of the buttons are in the exhibition as well as one of the moulds she used to make them. There are also some of her iconic ceramics as well as those of Edmund de Waal, and a large jar by Magdalena Odundo as well as some of her lively and colourful monoprints. However, the most interesting piece in the entire exhibition is a piece of paper containing the agenda of a meeting which the ceramicist Henry Hammond attended – the entire sheet of paper is covered in doodles of bowls and decorations for them. I thought this summed up the craftsperson’s life so well, even when bogged down by administration his mind was roaming free and designing his next piece of work.
Posted by Carol Q at 07:35 No comments: 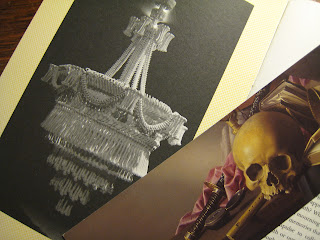 This exhibition at the Wellcome Collection contains over 300 artworks and artefacts relating to death from the personal collection of Richard Harris. The exhibition aims to question how artworks can help us to negotiate death. It is divided into five areas and begins with contemplating death in a room showing a series of memento mori. The theme of the second room is the dance of death and its indiscriminate nature, which is illustrated with rare prints and a series of ceramic figures. Violent death is presented in the third room with some gruesome Goya etchings. The fourth room concentrates on anatomy and includes medical books and diagrams as well as John Isaac’s sculpture ‘Are you still mad at me?’ a realistic depiction of a brutally dissected body which reminded me of the work of Gunther von Hagens. The final room is concerned with commemorating the dead and considers the rituals connected to death and mourning in various societies, many of which involve masks and images of the dead. The final piece in the exhibition is Jodie Carey’s ‘In the eyes of others’ a enormous chandelier of ‘bones’. The exhibition was direct in its approach to death, there was little mention of any form of afterlife, death was depicted as a final, often gruesome, ending, but it was interesting to see how death has been, and continues to be, an inspiration for many artists. 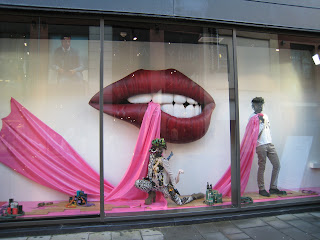 I loved the Surrealist images in the windows at Harvey Nichols’ store in Bristol. I thought the oversized bitten lip was a brilliant image for the undecided shopper. Other windows pictured a range of Surrealist images including rings of disembodied legs, clouds, eyes and keyholes. I particularly liked the X-ray images of the size zero shoppers – the ultimate fashion shape – no flesh just perfect bone structure! 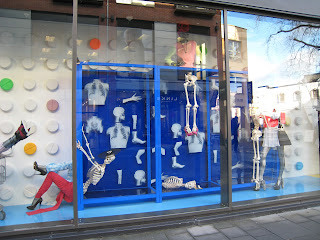 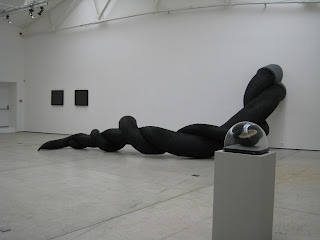 I thought I'd missed this exhibition of Kate MccGwire’s work at All Visual Arts but the exhibition dates had been extended so I was able to catch it this week. Her sculptural and pictorial work includes the feathers of everyday birds that we generally ignore, but the glorious colours in some of these pieces, the iridescent blues and greens of the mallard and the bright blue of jay feathers, were beautiful. The exhibition includes beautiful sculptural forms presented as scientific specimens in glass cabinets and pictorial pieces exploring the beauty and patterns of feathers. The gallery is dominated by ‘Gyre’ a twisting coil of black crows’ feathers that snakes into the central space. Although it twists into the gallery, the form appears quite controlled, smooth and uniform, more like an exploring tentacle than an eruption into the space. Another black form, but a more disturbing one because it appeared abjectly human, was ‘Coerce’ a dress-like shape held in scientific clamps in an antique cabinet. The front of the form was covered in smooth magpie feathers but the back revealed a slash of sharp quill ends appearing as a scar down the length of the form; a disturbing contrast to the smooth front. Quill ends were also used effectively in two pieces entitled ‘Surge’ which used crow and pigeon quills to suggest movement within a rectangular frame. I went to the exhibition to see the large feather pieces, but was also impressed by the ‘Stigma’ series which I had not heard about before. These are rectangular pieces of lead with one or two circular areas removed to reveal decreasing circles of tightly packed pigeon tail feathers. There was great depth to the pieces and almost a silky smoothness to the lead, which appeared quite textile like, and contrasted with the rough feathers of the stigma. All in all, the variety of pieces and the combination of sculpture and wall-hung pieces made for an interesting exhibition.
Posted by Carol Q at 08:56 No comments:

Alice Kettle: Looking forwards to the past 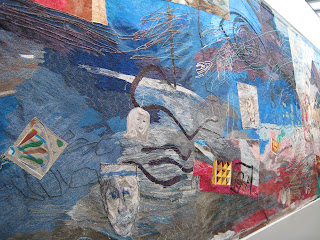 I am helping Alice Kettle with a project that involves lace, so while I was in Winchester I thought I’d go and see her enormous embroidery ‘Looking forwards to the past’. She is known for her large painterly machine embroideries, but the scale of this one, hanging in the Winchester Discovery Centre, still takes your breath away: it is 16.5 metres long and 3 metres tall. It depicts her impression of the history and contemporary life of Winchester and uses a vivid colour palette taken from the Winchester Bible’s illuminated manuscripts. It incorporates images from Medieval wall paintings and tiles, Anthony Gormley’s ‘Sound II’ statue in the cathedral crypt, as well as depictions of contemporary life and people. It provides an image of Winchester that only someone born and brought up in the city could produce; a feeling of ancient history combined with the everyday; the broad sweep of lived experience contrasted with jewel-like details. The image above only shows a small section, but it is an amazing textile and you can even sit in the café and admire it with a cup of coffee. The lace project I’m helping with will be revealed at the National Maritime Museum next month, so watch this space for details of that.