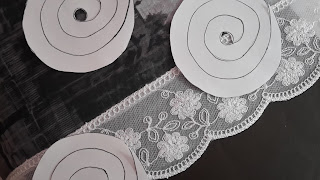 I’m busy assembling the parachutes to accompany my Battle of Britain lace panel exhibitions. All the parachute shapes have been made by visitors and volunteers at Bentley Priory Museum in Stanmore London, the headquarters of Fighter Command during the Battle of Britain. They have made 1497 in all, one for each allied airman killed or mortally wounded during the battle. The idea is that we will commemorate them all by suspending the parachute shapes in an installation. I’m busily attaching them to fishing wire by the centre of the circle so they hang down forming a line of spiral shapes. I’m adding 50 to each line but also attaching some parachutes in pairs with a thread joining them so they can be hung over the line and lie below the level of those on the line. These paired shapes can also move more freely so can turn in the breeze giving a better impression of a parachute descending. I’m hoping that the two types of hanging system will allow the parachutes to be seen and also allow some movement. They also have to be transported to two different venues to be exhibited and then repacked so the system also has to be fairly simple to hang and pack. Apart from the practicalities, my overwhelming feeling has been the realisation that each one represents a lost life – it’s a sobering thought as there are so many of them.
Posted by Carol Q at 07:59 No comments: 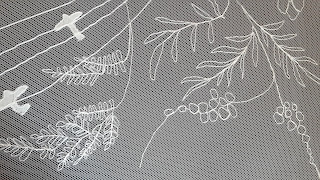 I was intrigued to see that Megan Markle’s lovely wedding veil was edged with the floral emblems of the 53 Commonwealth countries. For my recent Battle of Britain panel I also use the floral emblems of some Commonwealth countries to represent the allied airforces involved in the battle (some are shown in the image above). My task was easier than that of the royal embroiderers as I only had a few to find, however, I do understand the process they must have gone through as trying to embroider plants you’ve never seen is not easy. I had to look on the internet for images of wattle (for Australia) and silver fern (for New Zealand), which is probably what the royal embroiderers had to do, and I guess that Harry Cross, the designer of the original Battle of Britain panel in the 1940s would have had to use an encylopaedia. Our styles of lace are also different, Harry Cross’s design was produced on a lace machine, while mine is handmade needlerun lace on net. I haven’t seen good close ups of the royal lace yet, but some of it seems to be applied to the net rather than worked into it – it may be a mixture of the two. Some of the images I’ve seen suggest that the flowers were embroidered on organza which was then cut out and appliqued on to the veil. It is certainly stunning and I hope to see some more images soon. 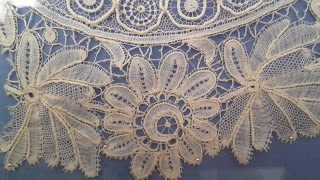 I’ve had a very exciting few days in Nottingham looking at the lace and designs in several archives. The lace in the image is a lovely piece of mixed Brussels lace I saw in the lace archive at Nottingham Trent University. The main focus of my visit though was to look at curtain lace designs. I saw so many interesting things but the highlights were a collection in the textile archive at Newstead Abbey from the Town family, which included three generations of curtain lace designers and some lovely designs for curtains and napery from the John Ivor Belton collection in the industrial archive at Nottingham Castle. Those two collections were quite a contrast because the Town one included lots of inspiration drawing and training pieces with some small and medium size designs whereas the Belton collection included some very large designs that covered the entire table. Both included letters and newspaper cuttings and images the designers had kept for inspiration. It’s so good to find that this material is being kept and archived. I’ll definitely be returning to do more research.

Fashions at the 1831 royal coronation 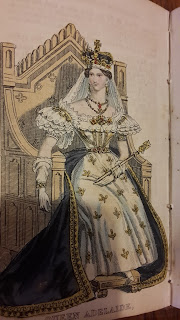 My 1831 edition of The Ladies Pocket Magazine contains a section about the coronation of King William IV and Queen Adelaide  - shown in the image in her coronation robes. It explains the details of the service, the order of precedence and the regalia but unfortunately does not go into great detail about the clothes and lace worn by the royal couple. However, a chapter entitled ‘Reminiscences of the coronation’, which is set out as a letter from Lady Julia F to her friend the Hon Maria is much more entertaining. She tells us her chaperone was her cross aunt, Lady Jane, and how they disagreed about most of the fashions, which her aunt found quite revealing, either because they were low cut or for their use of flimsy fabric. Julia describes the fashions in general as comprising a lot of tulle, crape, and gauze, mainly in white and light colours. There seems to be a fair amount of lace on show, mainly blond, which her aunt seemed to disapprove of, preferring point lace. Julia describes her own dress as ‘white gauze de Paris, which offers a perfect imitation of blonde lace over a white gros de Naples slip’. She continues ‘A low corsage, trimmed with a double fall of blond lace, set on very full, comparatively narrow at the back and front, but forming very deep epaulettes’. It seems blond lace was more fashionable than the point lace preferred by Lady Jane. Julia is quite forthright about some of the fashions she sees, describing some of the noble ladies as beautifully dressed but others as vulgar with mismatched clothes. Unfortunately she does not describe the queen’s attire only saying ‘Everyone agreed that the queen never looked so well’. The service was clearly quite lengthy and Julia reports that many of the ladies produced biscuits or sandwiches from their reticules and one even produced a small silver goblet and bottle of Madeira wine. Inevitably Lady Jane considered eating in church vulgar and would not partake, as for sharing wine from the silver cup ‘ she shrank from it as if it had been a poisoned chalice’. 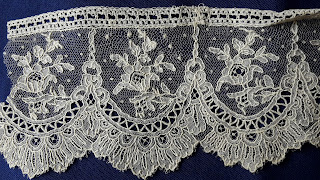 This beautiful little piece of needle lace epitomises what I love about lace – with just a needle and thread, and obviously a lot of skill, you can make the most exquisite lace. The whole thing is handmade using mainly buttonhole stitches looped through the row above. There is very little shading or use of filling stitches but the fineness of the design and the outlining with the thicker cordonette gives it some depth. In fact I think the worker has used a cordonette composed of a bundle of the threads she used to make the main lace rather than using a thicker thread. The stitches in the more open ground work are a little haphazard but I quite like that evidence that the work is handmade. There is also a bit of variation in the motifs at the dip of each arch with some having more ground stitches than others. It’s a lovely piece of lace and I bought it for next to nothing in a bundle with some other lace samples!