This conference was held over two days. On Thursday evening on 11 February at the RCA, Lesley Millar and Sarah Gilligan spoke. Lesley talked about the haptic and how this is linked to craft while the optic is linked to art. Seeing is intellectual, while touching is experiential. She described how secrets are entrapped and layered in cloth and that every contact leaves a trace so that forensic analysis turns the silent into a revelatory witness. Sarah Gilligan talked about long sweeping coats being linked to masculinity in films and TV.

On Friday at the V&A we heard from several speakers. First was Glenn Adamson who talked about how postmodernism was concerned with surfaces and how postmodern architecture was driven by surface. He explained that the surface is the sight of superficiality rather than having a complex meaning as Lesley had described the previous evening. Francis Summers is studying the work of Martin Arnold who has made new short films from old Andy Hardy musical films by replaying and extending some of the sequences. Some of those he showed us with Micky Rooney and Judy Garland were quite uncanny, pictorially and vocally. Stephen Knott is researching painting by numbers kits and thinks they widened access to art in the 1950s. They reflect the artists use of readymades.

Miriam Nighy talked about her anthropological study of weaving in Morocco. The women make the carpets and then the men distress them with bleach and sunlight because they get a better price for old ones. Miriam also described the rituals associated with removing the carpets from the loom. The liminal space as they transfer from being a piece of work to a carpet is dangerous so the evil eye can enter as the carpet is cut off the loom.

Alice Barnaby talked about light and surface in drawing rooms in the late 19th century. She explained how light and gas light affected drawing room surfaces and that the drawing room became a perceptual laboratory for experiments with ambient light. She talked about transparent paper blinds that were used at windows and as lampshades. Rudolph Ackermann and William Orm sold these transparent prints.

Charlotte Nicklas then talked about colours in 19th century fashion. Margaret Ponsonby discussed conservation of textiles in historic houses. Christine Guth described Japanese lacquer techniques. The number of layers involved signified opulence and meta consumption in a similar way to the layering of Japanese clothes. Old objects were more prized so some lacquer work was made to look old in the same way as the carpets in Morocco. There is also a social significance to worn articles in Japan and mended items remind the user of their own mortality.
Posted by Carol Q at 08:16 No comments: 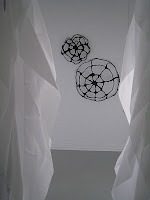 Eva Scholberg’s large folded piece that had been exhibited outside in Oslo attached to a tree was too difficult to transport so she had produced smaller pieces for the gallery at the Hub. These looked stunning bent to form a curved wall. Anniken Amundsen’s drawings and forms also benefitted from being shown together rather than in different rooms as they were in Oslo.
Posted by Carol Q at 08:49 1 comment: