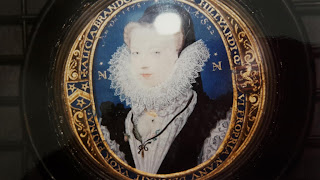 I’ve been interested in lace ruffs for many years and have a collection of photographs of them, many from portraits like this lovely miniature in the V&A collection. It was painted by Nicholas Hilliard and depicts his first wife Alice Brandon when she was 22. It also includes the year in which it was made, 1578, which is useful for dating the lace. She wears a very full lace ruff with a wide edging of bobbin lace, generally referred to as ‘bone lace’ at the time. Gilian Dye has done a lot of research into these early laces and her series of books explain how the lace was constructed. The main stitches were plaits, cloth stitch and a lock stitch, which is less familiar today. The lace would have been attached to fine linen gathered onto a band which required starching and goffering to form the loops of the ruff. Janet Arnold’s book ‘Patterns of fashion 4’ explains the process with beautiful drawings and illustrations and even gives instructions for making a ruff. 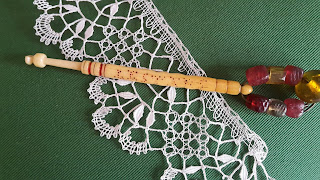 This interesting lace bobbin is inscribed ‘From Lesters’ and is thought to have been given to lacemakers by the lace buyer Thomas Lester for good work. The Lester family were lace buyers in Bedford and had a shop there where they collected work from the local lacemakers. They used the bobbins for advertising and also as a reward for good work. It is claimed that Lester would give one of these bobbins to a girl if her work was particularly good and clean. However, T L Huetson in his book ‘Lace and bobbins’ relates a story that if the lace was dirty or badly made Lester would invite the girl to choose a bobbin from a drawer and then shut the drawer quickly pinching her fingers. Huetson does say this story is unlikely though because the lacemakers he spoke to whose older relatives knew Lester thought it was out of character. The bobbin is made by the person the Springetts name the ‘blunt end’ man in their book ‘Success to the lace pillow’ who was working between 1868 and 1874. 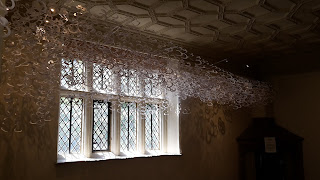 Having just installed my parachute installation as part of my response to the Battle of Britain lace panel I attended the Craft and text conference on Monday. It was a very interesting day with some great presentations but the one that interested me most was by Lynn Setterington on her project ‘Sew near – Sew far’ which she carried out in collaboration with Bronte Parsonage Museum in Haworth. She engaged with various local groups, inviting participants to embroider their own names on fabric, which was then joined into long lengths, and used to write the pseudonyms of the three Bronte sisters, Charlotte, Emily and Anne, outdoors on the Yorkshire moors. These huge signatures, imprinted on the landscape, released the Bronte sisters from the museum and reunited them with the moors that inspired them. My parachutes were also made in collaboration with a museum in my case, Bentley Priory Museum, the headquarters of fighter command during World War II. Listening to Lynn’s talk, I was struck by how members of the public become involved in these projects and how it brings people together, often from different walks of life. It’s also interesting for the artist to engage with the public in such a close way and an honour that people will give up their time to help produce a collaborative work. It is also a technical challenge to develop a task that is adaptable for different levels of abilities, so that everyone can take part whatever skills they have. Collaborative projects benefit the artist and the participants and working together in that way seems to lead to a greater understanding of art and art projects in the public consciousness.

Installing 'Battle of Britain: then and now' lace 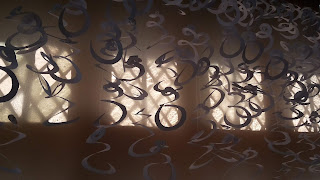 The early part of this week was taken up with installing my contemporary Battle of Britain lace panels and the associated parachute installation at Gawthorpe Hall in Lancashire. The hall is a beautiful old building and my work is being shown in a lovely room with mullioned windows adjacent to a room where the original Battle of Britain panel owned by the Gawthorpe Textile Collection (GTC) is being exhibited. On a previous visit I had discussed with Jenny Waterson, the Learning Curator at GTC, how the work would be displayed, so we knew where everything would go before we started the hang. Gail Baxter had kindly come with me to help as well so the three of us started by hanging my three new lace panels. We discussed whether to leave them hanging straight down the wall or set them off the wall, and decided that the shadows looked better with the panels slightly forward from the wall. The next thing to do was to fill the long case in the room with some background information about the panels and some lace equipment. Once all of that was done we started hanging the parachute installation. Although I had planned it in my mind I hadn’t had the space in my studio to actually hang the parachutes so I was a bit apprehensive about whether it would fit in the space and look effective. I needn’t have worried though as the hanging system worked well and although it was time consuming the installation looked good when it was finished – taking it down will be another matter however! Many, many thanks to Gail and Jenny for all their help in making it happen.