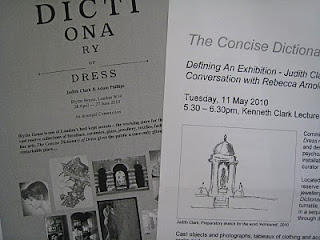 This conversation between fashion curator, Judith Clark, psychoanalyst, Adam Phillips, and Rebecca Arnold of the Courtauld Institute discussed The concise dictionary of dress. This intervention at the V&A’s reserve collection at Blythe House is a collaboration between Clark and Phillips. The idea came from thinking what would happen if museum labels were substituted. They chose 11 words that were linked to psychoanalysis and dress, Phillips then wrote definitions for them and Clark produced the installations linking them to dress. The project aimed to establish relationships between words and the language of dress. The words and clothing are mutually illuminating although they use different languages. Although it is interesting to consider whether the information given in the definitions usurps or aids the experience of looking at the interventions. An interesting point made was that histories are stored in our bodies and in the museum store and are not classified until they are exhibited.
Posted by Carol Q at 10:30 No comments: 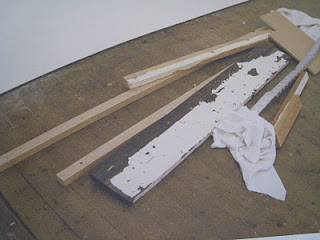 This exhibition entitled ‘Since I fell for you’ at the Ikon Gallery, Birmingham, showed some of Susan Collis’ older work and a new commission. In her earlier work she subverted the objects found in galleries during the setting up of exhibitions, such as overalls and ladders, by carefully embroidering ‘paint splashes’ on the overalls and inlaying mother of pearl ‘stains’ on the ladder. She is now collecting items from skips and refurbishment projects in is an effort to move away from items that have a relationship to domestic scale. The first room of this exhibition held her new commission, which seemed to be an unready and unprepared wall with rawlplugs, screws, staples and paint stains on it, however, careful inspection revealed they were carefully made of precious metals, gems and coral. The pretence that the gallery is not yet ready for visitors is also heightened by the installation of a bucket collecting dripping water in one of the galleries. In the catalogue she says she is now trying to introduce oppositions into her work such as dirty and clean, tidy and messy, and well crafted and un-made. She obviously likes dualities of meaning which is why she uses precious materials but in such a way that they appear quite ordinary.
Posted by Carol Q at 10:27 No comments: 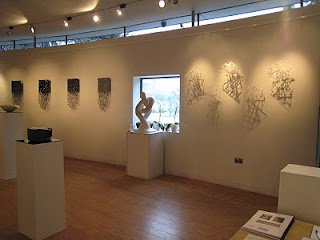 Constructed space is the title of the most recent exhibition in which my work has been displayed; it runs from 12 April to 15 May. The venue is the Sunbury Embroidery Gallery which was purpose built to house the Sunbury Millennium Embroidery. Constructed space shows the work of four recent MA students from UCA Farnham.

Gail Baxter’s recent work on archives has led her to produce cubes of dipped thread and paper representing the gaps and absences found in archives. Ros Perton is a ceramicist whose stacked bowls employ a subtle range of glazes. Tracy Nicholls produces fine trellis panels of glass. Carol Quarini’s net curtains include messages in tambour lace that suggest the curtains have a voice and a mind of their own. What links the work of these four artists is their references to lace and the delicate shadows the work produces.
Posted by Carol Q at 09:04 No comments: 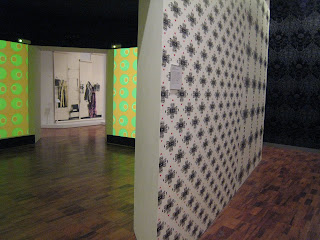 This exhibition at the Whitworth Gallery in Manchester uses wallpaper as a medium through which to criticise and subvert domestic culture. A byword for the neutral and overlooked, wallpaper in this exhibition gets the chance to redress the balance and show that it can shock, subvert and cause unease.

Much of the exhibition deals with historic wallpapers and how taste has changed, but I was more interested in the conceptual designs. It was interesting to see Robert Gober’s work, which previously I had only seen in books. His Male and female genital wallpaper and Hanging man/sleeping man were both shown but perhaps because I had seen images of them before they seemed familiar rather than shocking.

I found Abigail Lane’s Bloody wallpaper copied from images taken at a crime scene shocking because they were based in reality. At first glance you do not realise the images are copies of real blood stains but once you do they engender a feeling of unease.

Catherine Bertola’s Beyond the looking glass was very effective. The wallpaper seemed to be peeling from the walls and into the room and seen through an opening in the gallery wall made it appear even more three dimensional and life like.

I thought Conception by Francesca Granato in collaboration with Helen Knowles was a clever piece of patterning using stylised outline drawings of the male and female genitalia. It was more subtle and clever than Robert Gober’s more obvious drawings.

Erwan Venn’s animation entitled Destroy wallpaper shown in the image above was very entertaining. It started with an image of a wallpaper pattern made up of several components, which then seemed to slip down the wall and crash to the skirting board. The process was accompanied by the tinkling sound of crashing glass.

The exhibition showed that wallpaper can be more than a simple background wall covering. As it says in the catalogue ‘wallpaper obliterates the past. It covers up the cracks, the dirt, the evidence. It wipes the slate clean and enables new beginnings.’
Posted by Carol Q at 09:02 No comments: