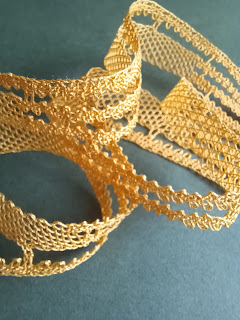 Since I made a small 3D sculpture entitled inside:outside for the Tansa exhibition earlier this year (see the March blog) I’ve been playing about with a few other shapes that can be manipulated into mini sculptures. I do like the way they can be moved about and altered although I think this piece would need some quite strong stiffening to keep its shape. Perhaps adding a thin wire round the edge would be a good idea. 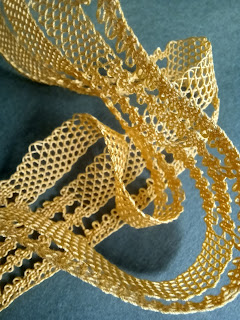 As you can see from this image the piece is basically a strip of Torchon lace worked in thin separate sections all linked at some point but allowing quite a range of twisting and movement. I like the effect especially as it shows off the open nature of the lace and will keep playing about with the theme when I get a bit more time. 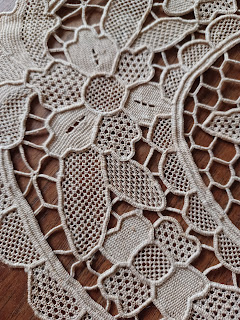 I’ve been reading about the revival of Venetian style needlepoint laces throughout Europe during the 1880s as part of my research into ‘imitation’ laces. These heavier more structured laces became fashionable as trimmings on clothing at this time. This led to lacemakers copying examples of seventeenth century laces but also in many cases remodelling actual pieces of old seventeenth century lace. Belgian lacemakers famed for the expertise of their needlelace copied many of these seventeenth century designs so skilfully that it is thought some Venetian merchants ordered the lace and sold it for high prices to visitors to Venice as genuine seventeenth century work. It is very difficult to distinguish it from the original lace although one tell-tale sign is the use of cotton thread instead of the original linen thread as cotton thread was not used for lace making until the 1830s. However, hand lacemakers soon had competition in the form of chemical lace made by embroidering patterns on to a sacrificial backing material which was then chemically removed and which superficially imitated the more solid Venetian styles very well. The lace in the image is a modern interpretation of needlepoint lace.
Posted by Carol Q at 13:12 No comments: 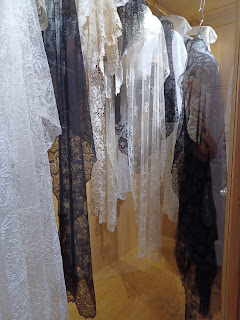 These shoulder coverings were all popular at different times during the 19 century and in many cases it is difficult to classify them. Scarves and stoles look very similar as do pelerines, fichus, berthas and collars depending on their width and when they were made. The examples here all come from the lovely ‘Lace in fashion’ exhibition which is currently on display at Wardown House Museum in Luton. Not only do they show the range of different fashions they also show how lace changed during the century from the entirely handworked, such as the fichu made in Bedfordshire Maltese lace, to a beautiful black machine lace collar. 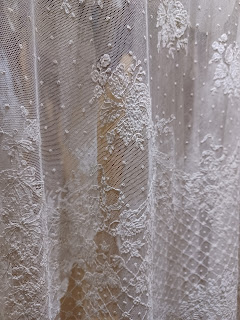 There is a lovely wide Duchess collar of mixed Brussels bobbin and needle lace showing how the two types of handmade lace were traditionally combined and the image shows a detail of a beautiful dress including both types of Brussels lace applied to a machine lace background showing how handmade and machine lace were often combined. There is also a fichu combining pillow lace with machine lace as well as scarves with Honiton bobbin lace applied to machine made net. Several of the other collars have a machine net basis including a Limerick lace collar and another tamboured shawl. Other Irish laces popular in the second half of the 19 century are also represented with a Carrickmacross applique lace bertha, and an Irish crochet collar. I was also interested to see some examples of ‘imitation’ lace following on from my recent blog posts. The exhibition includes two Chantilly lace shawls one handmade and the other machine made; difficult to tell apart without close inspection as would have been the case when they were worn. There is also a chemical lace pelerine worked in the style of Irish crochet and a late 19 century collar worked in the style of 17 century lace, so lots of copying and convergence going on. If you want to see more you will have to visit the exhibition which includes much more lace than the few pieces I’ve described here and is well worth a visit. It is open until 11 September. 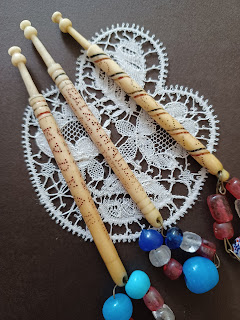 Two of these bobbins commemorate sad occasions, the one on the right is inscribed ‘Eliza Ward is no moor’ and the middle one says ‘Eliza Hall my dear sister died Feb 5 1866’. Many of these types of bobbins recording deaths also state the age of the deceased but perhaps that was more common if they were exceptionally old or young. T L Huetson, who carried out extensive research into lace bobbins, records that in some cases a piece of bone from the meat served at the funeral meal was used to make memorial bobbins. I don’t think this is the case here as both bobbins are of good quality and don’t give the appearance of coming from an ordinary joint of meat. The bobbin maker David Springett in ‘Success to the lace pillow’ says he was initially sceptical of this tradition as contemporary meat joints do not have thick enough bones for bobbin making but he notes that animals in the 19th century were fatter, larger boned and slaughtered later in life so could have had bones of the required thickness. Also many village families kept a pig which was fed on scraps and could have provided bones for the occasional bobbin. However, most 19th century bone bobbins are made from horse or oxen bone, both of which were widely available at the time. The third bobbin in the image may also be linked to the central one. It is inscribed ‘David Hall my dear son 1866’. I bought these two bobbins together, but I don’t know if David and Eliza Hall were nephew and aunt. However, it is a coincidence that the bobbins were made in the same year by the same maker and I found them both for sale in the same place. There is no indication why the lacemaker chose to commemorate her son in 1866 – I hope it was to record his birth or some other happy occasion.
Posted by Carol Q at 12:32 No comments: