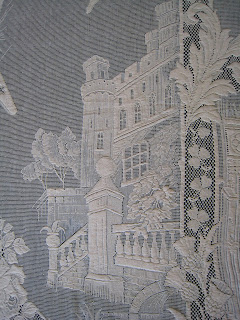 I’ve been trying to identify the castle in the Battle of Britain commemorative lace panel and this week asked for help on social media. I’ve had several suggestions – Windsor, Ruthin, Penrhyn and Leeds castles. Leeds castle have responded saying it isn’t them but the others are still on the table. As the panel was designed by Harry Cross in Nottingham I originally started looking at castles in Nottingham and I was convinced the castle was Elvaston Castle from images on the internet. However when I actually visited Elvaston and walked round it I realised that it didn’t really fit the image on the panel so it wasn’t the one I was looking for. It may be that the castle is not based on a real castle or that Harry Cross mixed aspects from different castles, however the other images on the panel are all taken from life so it seems likely that the castle is too. One of the problems is that many castles look quite similar but once you start looking closely this one is quite distinctive. If you think you recognise the castle do let me know and I’ll investigate further.