Cloth and memory: Pins and needles 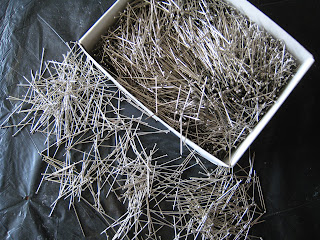 I have just bought 3000 needles and over 1000 g of pins for my installation at Salts Mill for the Cloth and memory exhibition in July. That is a lot of pinning! I worked out how many pins and needles I need for an area 20 cm square and multiplied the results up to work out how many I need to fill the curtains I am planning to hang. The curtains will be over 3 m long – hence the vast numbers of pins and needles. I ordered all the materials yesterday and was delighted that the pins, ordered from Morplan via standard delivery, arrived this morning. I hope the other materials arrive as promptly so I can get started.

I am a great admirer of Wendy Ramshaw's work and this exhibition at Somerset House, showing key pieces from the past 50 years of her career, is well worth a visit. It includes her early work making paper jewellery in the 1960s, examples of her ring towers, abstract brooches and necklaces, some of her pieces for Picasso’s women, and models and photographs of her gates, as well as the fascinating ‘Room of dreams’.

I went expecting to see beautiful jewellery and metalwork and ended up being beguiled by her inventiveness in linking jewellery to folklore, fairy tales and paintings. Some of her work represents characters from fairy tales such as the ‘Necklace for the miller’s daughter’ comprising neck rings bound with spun gold embroidery thread, tangling them inextricably together. Other pieces link to paintings, such as the ‘Ornaments for the sleeping gypsy by Henri Rousseau’. One of these necklaces includes recycled ivory claws, and taxidermists lion’s eyes, just the sort of necklace the sleeping gypsy might possess and very reminiscent of Rousseau’s painting. Keys are another theme, with Alice’s tiny key to open the doors in Wonderland and the necklace of keys for Bluebeard’s wife. The seven keys to the cabinet were intricately worked and represented different phases of Wendy Ramshaw’s jewellery. I would be interested to see if they really do open the drawers to the cabinet and what secrets the drawers contain.

I came away amazed by the amount and inventiveness of Wendy Ramshaw’s work. She has a unique and distinctive style but has continued to develop her ideas and push her materials to achieve new effects - a wonderful body of work.
Posted by Carol Q at 11:48 No comments: 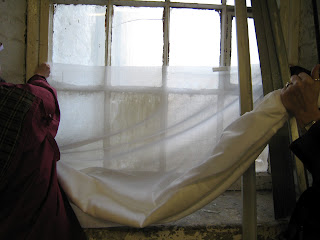 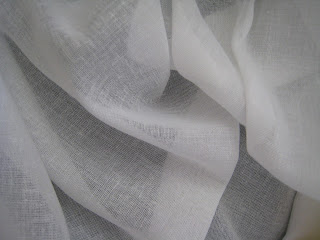 The National Centre for Craft & Design 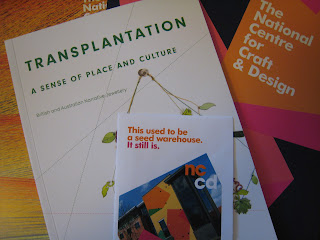 My main reason for going to the National Centre for Craft & Design (nccd) at Sleaford at the end of April was to attend the symposium ‘Making it relevant’, but it was also hosting two interesting exhibitions so it turned out to be a busy day.

The symposium was aimed at makers and explored career paths and routes to practice. It was opened by Lesley Millar talking about the roots of contemporary textile artists and how what we produce today is based on what has been done in the past. Several makers then described their work and the routes they have taken. Sue Blatherwick spoke about her father’s ceramic practice. Sarah O’Hana talked about her jewellery practice and the laser techniques she uses. Ruth Singer described how she had changed from a career working in museums to become a craft practitioner and writer. Karina Thompson and June Hill told us their experiences of being part of a mentoring scheme. Gail Baxter described her routes to practice as a lacemaker and showed how the boundaries of contemporary lace are expanding, for example with the installation of the lace umbrella made of luminescent thread in Kensington Palace by loop ph, for which she had been an advisor. Emma Daker of Craftspace spoke about that organisation and the exhibition ‘Made in the Middle’ one of the current exhibitions at the nccd, of which she is the curator.

After lunch there were three useful concurrent practical sessions on exhibiting, social networking for makers, and advancing your career. I went to the exhibiting session with Liz Cooper and Laura Mabbutt from nccd which was full of useful tips about approaching galleries and curators.

We also had time to have a quick look at the Made in the Middle exhibition which showcases contemporary craft from across the Midlands; I particularly liked Imogen Luddy’s ceramic plates incorporating lace doilies. The other exhibition was Transplantation, which included the work of Australian and UK jewellers on the theme of migration. I found Jo Pond’s work based on her home, which used to house a community of nuns who taught needlework to young girls, very interesting, especially the way she incorporated references of their lives into her jewellery.