I’ve long admired the lace curtain designs of Marcel Tuquet and am lucky enough to have a folder of some of his Plauen designs published in 1900. I had always assumed that he was based in Germany or somewhere else in Europe but I have discovered a reference to him in Nottingham. The reference comes from the London Gazette in 1890 and is a notice that the partnership between Marcel Tuquet and Marcel Boudard, described as lace curtain designers, is being dissolved by mutual consent. It states that Marcel Tuquet will carry on their designing business in Nottingham and his partner will continue their lace manufacturing business. I’m now interested to know whether Marcel Tuquet moved to the continent by the time the design book was published or whether he remained in Nottingham and sent his designs from there to Plauen. If anyone can enlighten me please get in touch.
Posted by Carol Q at 10:56 No comments: 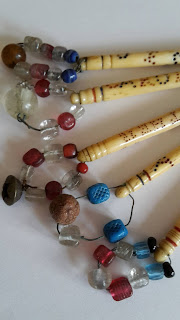 Many nineteenth century lace bobbins have spangles of square cut beads. They are made of glass, are a square shape, and have an indented or pitted surface. Most of those in the image are clear or transparent red, the most common colours, but two are opaque blue. The bobbin maker Robert Haskins in an interview with The Bedfordshire Times and Independent in 1912 described how they were made. They were not cut at all but melted off a stick of glass one at a time. They were twirled on a copper wire to make the central hole and pressed with files to make the square shape and the surface markings. Haskins was taught to make them as a bobbin maker but beads like the two blue ones were also used for trading in Africa so might have been more commonly available. The Pitt Rivers Museum has sample cards of beads labelled ‘Trade beads for South Africa’ sold by a company in London. Whether the beads used in the bobbin spangles were obtained from the same source or whether they were made by the bobbin makers is not known, perhaps it was a mixture of both.
Posted by Carol Q at 09:33 No comments: 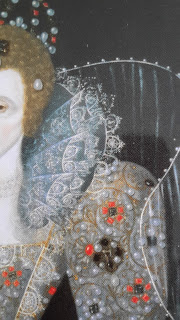 By the end of the sixteenth century lower necklines became fashionable and the appearance of ruffs also began to change. Many were now worn open with the edges attached to the neckline on either side and pinned to the corners of the bodice. Ruffs were still wide and could be made entirely of lace or made of fine embroidered fabric edged with lace. Both the ruffs illustrated here are made of lace and edged with handmade needlelace. 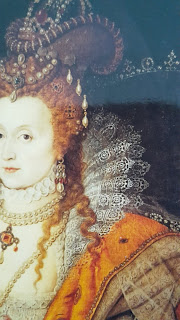 Both images depict Queen Elizabeth I, the top one is by an unknown artist and was painted in 1590, the second is known as the rainbow portrait by Isaac Oliver and was painted in 1611. The ruffs would have been supported by an underproper (more on those another day) and the diaphanous veil behind would also have been supported with wire. In both portraits the Queen’s bodice is also embellished with fine needlelace so the whole effect would have been quite magnificent.