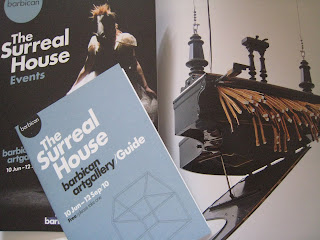 This exhibition at the Barbican Art Gallery brought together many well known Surrealist works and some surprises. It contains a large number of artworks, films, photographs, architectural drawings, plans, sculptures and installations. Jane Alison, the curator, says in the catalogue that in planning the exhibition she thought of the gallery as a kind of house and wanted to take the visitor on an experiential journey through it. The viewer enters through a door next to Marcel Duchamp’s Fresh window in which the panes are made of polished leather so they reflect the gaze. The window is a key metaphor in the exhibition as the threshold between outside and inside, reality and dream, the rational and the irrational.

Some of the pieces that impressed me most were Rebecca Horn’s Concert for anarchy, an upside down piano that regularly spews out its keys in a cacophony of sound cleverly referencing confinement and escape. Donald Rodney’s tiny house made from his skin In the house of my father effectively revealed the fragility of home. Maurizio Cattelan’s Charlie don’t surf of a small figure of a boy pinned to the table by pencils through his hands was a chilling contemporary example of the wax figures found in early museums. While Edward Kienholz The wait initially seemed to be an installation of an old woman in her cosy parlour until you realised that she was just a construct of memories, bones and dust.

It was interesting to see some of Magritte’s paintings, especially Time transfixed which was much smaller than I had realised. There was a good selection of Francesca Woodman’s ethereal photographs. Edward Hopper’s House by the railroad was the model for the house in Psycho and the Addams Family so it was interesting to see the original here.

I found the films being shown very interesting probably because I had not seen them before. Jan Svankmajer’s Down to the cellar follows the labyrinthine journey of a young girl to collect potatoes from the cellar, while his Jabberwocky turns a dolls’ tea party into a cannibal feast. I had not considered Buster Keaton’s work as surrealistic but in Steamboat Bill Jr he uses the window as an active participant in the drama and in The scarecrow an uncanny motherless home is revealed. Maya Deren’s Meshes of the afternoon follows her dreamlike path through a house in which dream and reality gradually and fatefully come together.
Posted by Carol Q at 02:29 No comments:

Richard Slee: From utility to futility 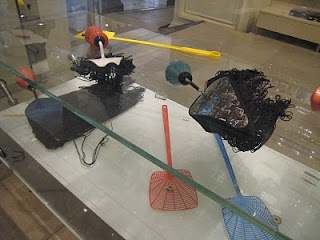 This exhibition at the V&A explores the decline of DIY among men and shows objects linked to home crafts that have been denied their functional purpose. The exhibits included brooms and brushes with ceramic bristles, hammers with ceramic heads, saws with ceramic handles and trowels with foam surfaces. This picture shows some of the items for sale in the shop. The tools were all normal size and only parts of them were non functional so you had to look twice to realise that they were decorative but useless.
Posted by Carol Q at 03:20 No comments:

Ernesto Neto: The edges of the world 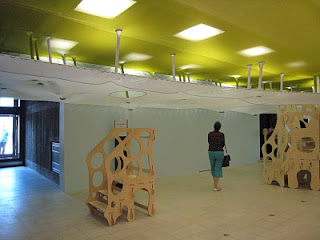 Ernesto Neto has taken over the upper floor of the Hayward to produce a labyrinth of tunnels and chambers made of stretchy fabric. He wants to engender the feeling of ‘getting inside your body’ and the whole experience felt very organic, as if it were growing and moving. Some areas are padded, others are layered with interconnecting tubes, and some are double skinned with lavender or camomile between the layers to provide a visual and olfactory experience. Steps at various points allow the viewer to climb up through one layer to see into the area above. The installation also continues out on to the open air spaces of the gallery and in one a small swimming pool and changing rooms have been installed so that people can swim round the pool like goldfish. The whole experience was very relaxing and magical.
Posted by Carol Q at 03:18 No comments: 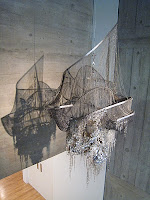 Other pieces that interested me were the doors, beds and clock by Elmgreen & Dragset. The wounded three legged chair by Diango Hernandez was also fascinating; the fourth leg of the chair circles on a turntable and momentarily completes the chair, triggering a light burst, then it moves on again. Roman Signer’s floating table, kept aloft by a stream of air, was also quite uncanny and appeared to be alive.
Posted by Carol Q at 03:15 No comments: