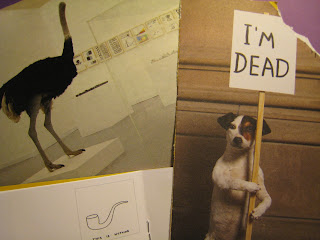 This exhibition of David Shrigley’s work at the Hayward gallery covers several galleries and presents many examples of his work. The responses he is hoping for according to the gallery guide are ‘laughter, intrigued confusion and disquiet’. I certainly found the headless ostrich and the Jack Russell holding the placard saying ‘I’m dead’ disquieting. While I was amused by the photographs of the site specific work, for example the wanted notice for the pigeon, and some of the drawings, especially the one entitled ‘Picnic’ of a figure covered in ants.
I enjoyed some of the references to other artists including the animation of the light switch being turned on and off and its link to Martin Creed’s light installation as well as the drawing of a pipe with the label ‘This is nothing’ as a nod to Magritte.
The animation of the dice being thrown and landing on one every time was very expressive even though it was a series of simple drawings. While the animation ‘New Friends’ in which a cube falls into a world of spheres and is cut into a sphere so it can conform was slightly menacing but yet comforting.
There is a large amount and variety of work in this exhibition but among the exhibits everyone will probably pick out pieces that appeal to them and have a resonance. So although you will not like everything you will find pieces that engender ‘laughter, intrigued confusion and disquiet’ as the artist hoped. 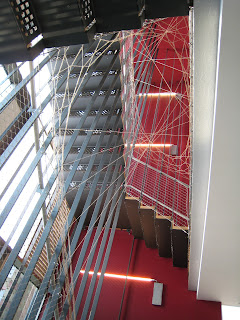 This site specific work by Shane Waltener at the Siobhan Davies Studios explores the relationship between lacemaking and dance. The piece illustrated here, entitled Stairwell Suite, was made by dancers acting as human bobbins as they travelled up and down the staircase holding large wooden bobbins with thread wound round them. A video of the work being produced runs on a screen next to the staircase and shows the elegant movements of the dancers throwing the bobbins between them over the stairwell to twist and weave the lace pattern. 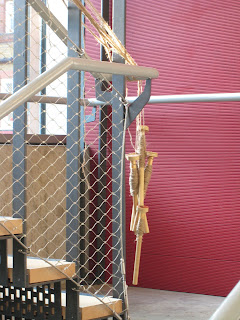 The other lace pieces in the exhibition are Ready Steady Stitch, a series of small architectural plans of the Studio that have been used as the prickings for bobbin lace. They form half stitch ovals and resemble the edgings for a series of tiny mats, but the use of coloured threads suggests the patterns formed by dance notation.

Lace making and dance notation are woven together very cleverly in this exhibition and the stairwell at the Studio provides a light and airy framework for the work.

Guided tour of Lost in Lace with Lesley Millar 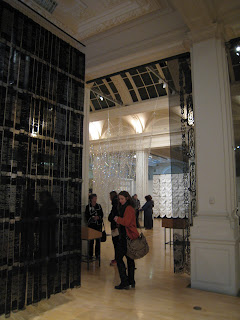 It was interesting to hear Lesley Millar (the curator of Lost in Lace) talking about the exhibition during a guided tour last week. She explained that the unifying thread running through the exhibition was that the works were all inspired by lace even though they did not all culminate in a lace outcome. In particular ‘Forty eight’ by Nils Volker, which is not obviously related to lace, was linked to the strong contrasts found between positives and negatives in lace. Another theme that drew many of the pieces together was their use of shadows and how these produced boundaries, thresholds, enclosed areas and new spaces. Among various snippets of information it was interesting to discover that Chiharu Shiota does not try to disguise the lights and other fittings in the spaces for her installations because in that way each installation becomes part of its new environment and some of the bleak fittings suggest the emptiness of institutions. As a lacemaker, I was amused by the gasp from the audience when Lesley said that Piper Shepard’s work was not lace but painstakingly hand cut work. I admire Piper’s work and think her piece is beautiful but if the audience think that is painstaking let them try the point de gaze needlelace from which her inspiration came, that truly is making lace from air. Lesley was an enthusiastic and fascinating guide and it was enlightening to discover the background to the exhibition.

Chiharu Shiota at Lost in Lace 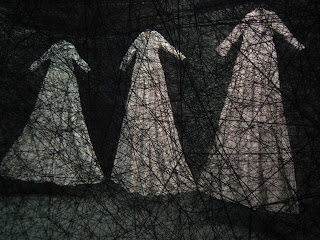 One of my favourite pieces in the Lost in Lace exhibition at Birmingham is Chiharu Shiota’s ‘After the dream’, in which five oversized, ghostly white dresses are trapped in a tangled web of black threads. 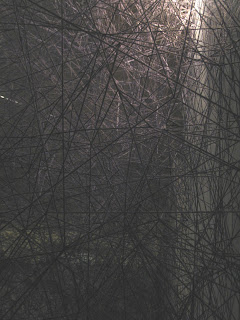 Visiting the exhibition again last week I noticed that as the threads in the installation have become more dusty with time, the effect has become more spooky. An experience enhanced by the light streaming through them.