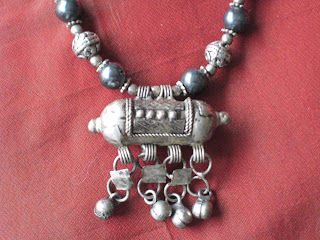 I discovered this useful website through reading the latest issue of the OATG newsletter. The Mansoojat Foundation was set up by a group of Saudi women interested in the ethnic textiles and costume of the Arabian peninsula. It includes many excellent photographs and information on events. The group are trying to collect more costumes but the skills used to produce them are dying out.
Posted by Carol Q at 07:14 1 comment: 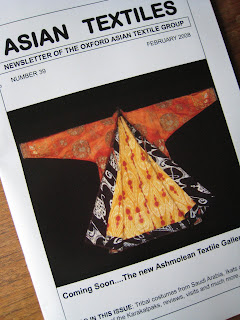 I have been a member of the OATG for several years. They always have a good programme of events and an interesting newsletter. The website also contains a series of useful links to museums and organisations covering textiles. The latest newsletter reports that once the extension to the Ashmolean Museum is completed there will be a large area devoted to textiles so more of the collection will be displayed. It also reports on the proposed closure of the Textile Conservation Centre at Winchester. Other topics in this issue are Central Asian ikats, Karakalpak textiles, Saudi Arabian costume, and Burmese woven tapes.
Posted by Carol Q at 07:09 No comments: 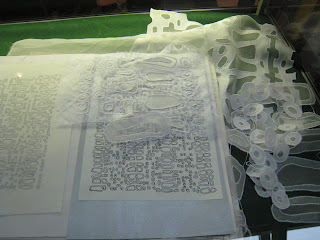 This exhibition of work by Anne Griffiths was held at the Vale and Downland Museum in Wantage. She specialises in working with delicate fabrics embellished with transparent appliqué and with etched or laser cut Perspex. This work was based on the spaces between things. She says she is interested in the ambiguity that exists in the boundaries between the fibres in woven fabric. Her etched and laser cut pieces appealed to me most; I particularly liked the shadows they caused to fall on the wall behind them. The framing system she uses is similar to the Muji photo frames, but the four corner links are extended behind to ensure the work lies flat and evenly spaced from the wall, maintaining a flat area for the shadows. Two of the etched pieces were limited editions of 20.
Posted by Carol Q at 07:50 No comments:

This exhibition was brought together by Lesley Millar to encourage an understanding of the links between traditional and contemporary practice. It represents the work of 35 textile artists from six countries. Below are some of the pieces I found most influential for my practice. 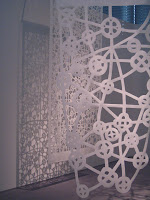 Mare Kelpman’s Estonian National Embroidery appeals to me because of its lace-like qualities. She has cleverly used two layers of pattern in different sizes and also the shadows they produce to form a multilayered piece that looks effective from all angles. The piece would not have been so effective if the layers had not overlapped. It has inspired me to use some paper cut outs in my practice. 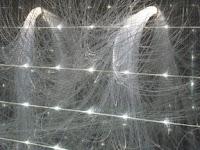 Reflective surface by Helena Hietanen uses light and fibres to produce an interesting installation that also has a slight movement to it. It looks a complicated structure but taking to her she explained that it rolled up easily for transportation. I am always interested in how artists make large installations that are easily transportable as this is a problem in my own practice. 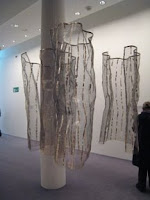 The tubes of Light by Agneta Hobin were attractive, especially the shadows they cast and the slight iridescence of the material, but I thought they would have looked much more effective if they had been at least double their length. 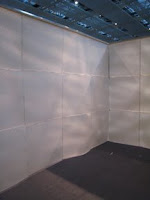 Shoku Nomura’s installation of washi was not as effective as I had thought it would be. She says in the catalogue that she is interested in how you can see a soft light through washi. I was expecting this light to be more luminous; perhaps the lighting conditions were not quite right. This is probably the case because the installation looks more effective in my photos than it did in life. I attended Shoku’s workshop on the Sunday when she showed us her technique. I thoroughly enjoyed this and was convinced that washi paper is luminous and that there are numerous possibilities for using it in my practice. 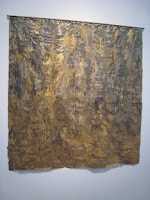 Ieva Krumina’s hanging Nobody appealed to me because of its lace-like qualities. It forms an attractive piece from a distance and rewards a closer look by being full of intricate detail. 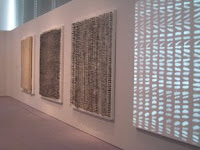 I generally find tapestries too solid for my taste but Sue Lawty’s installation Call and Response comprising four pieces in different media was fabulous. Her lead, stone and digital pieces were quite open, and the colours in her linen tapestry were very subtle with several changes of shade and slight alterations of texture. I have been considering projecting images onto walls as part of my practice and this installation encouraged me to take this further.
Posted by Carol Q at 02:54 No comments: 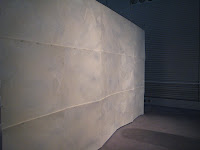 Shoko Nomura gave a demonstration of working with washi at the The Culture of Cloth Symposium at the Sainsbury Centre on 27 January 2008. She uses layers of washi to create sheets of paper that are combined to produce luminous installations. 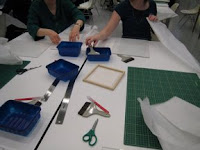 She starts with a sheet of washi on an acrylic board. Then adds a layer of dempun nori – a special starch glue – which gives the paper its sheen. She then adds layers of torn washi paper to build up very subtle patterns in the paper.

Once the pattern is complete it is no longer possible to determine where it begins or ends; a feature that Shoko is keen to express in her work. She feels that the process of layering the paper is as important as the finished work. I certainly found it a very therapeutic and all absorbing process to apply the layers of washi and feel them sinking into each other to form the final paper. The instructions for making the paper are in my sample book.
Posted by Carol Q at 02:47 No comments: 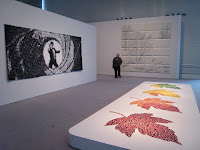 I liked the use of the incense sticks and will try making some patterns using this method of burning holes in paper and cloth. I also thought his use of safety pins was very clever especially with the double meaning they imply, they could be a good material with which to make blindfolds.
Posted by Carol Q at 02:29 No comments: 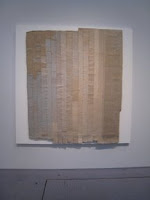 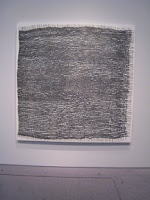 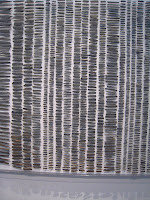