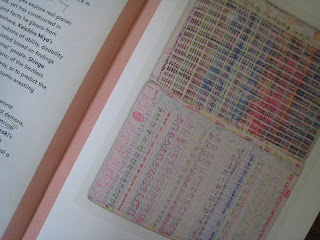 This exhibition at the Wellcome Collection celebrates the work of 46 self-taught artists living and working in social welfare facilities in Japan. Souzou means both creation and imagination in Japanese. I was most interested in the textile art but was also fascinated by some of the paintings. Noriko Tanaka’s ordered running stitches showed life and movement as did Toyo Hagino’s sewn geometrical shapes, while Yumiko Kawai’s three-dimensional breast-like shapes were intricate constructions. Other textile artists included Satoshi Morita who uses other people’s discarded thread ends to embellish blankets and Norie Shukumatani who couches threads to produce stylized images. As well as the textiles I found Norimitsu Kokubo’s fictional cityscapes fascinating. Each street and building is carefully rendered like a three-dimensional map and because they are so detailed I was amazed to find that the cities are fictional and not places that he has visited. One vast, densely worked, cityscape he is currently drawing is about 2 m high and will be 10 m long when it is finished. I also found Kenichi Yamazaki’s engineering drawings, incorporating points made by a compass, interesting, probably because they reminded me of lace prickings. Shingo Ikeda’s notebooks full of densely written figures and notes about subway journeys probably best summed up the art in the exhibition, it was all compulsive, dense and repetitive, and slightly uncomfortable because of that, but nevertheless fascinatingly beautiful.

Oriel Davies Gallery: Be our guest 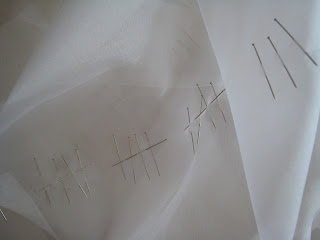 I sent off my work to the Oriel Davies Gallery for the ‘Be our guest’ exhibition today. The exhibition is celebrating the bed and breakfast in many and various quirky ways. I’m showing a curtain entitled ‘Wish you were here’ pierced with a row of pins and needles in the tally pattern of counting units of five. Many people who use B&Bs are workers away from home and the tally marks on the curtain suggest that they are counting the days until they can return home. This misuse of pins also suggests the sharpness and pain of separation and subverts the cosy homeliness of the B&B. There are about thirty exhibitors and from the illustrations in the invitation there seem to be some very entertaining pieces. The exhibition opens on 29 June and ends on 4 September.

Beauty is the first test: a film by Electric Egg 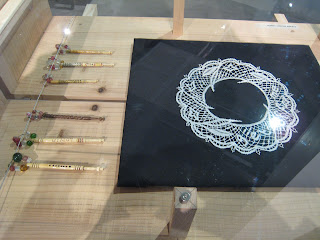 As one of the five case studies in the Beauty exhibition I was videod in my studio last month by Steve and Neil from Electric Egg. They filmed me making lace, designing a pattern, winding bobbins, pricking a pattern and also interviewed me. They have now combined input from the five of us to produce a response to the theme of the exhibition and you can see it on Youtube or Vimeo. It gives a great idea of how craftspeople go about their work and shows how we all use maths in our practice and its fun working out whose hands you're seeing and whose voice you're hearing at any one time. The five case studies are Gail Baxter, David Gates, Stella Harding, Margo Selby, Carol Quarini. The film will be shown as part of the ‘Beauty is the first test’ exhibition which is at the National Centre for Craft & Design at Sleaford in Lincolnshire, until 30 June, it then tours to the Bilston Craft Gallery, Wolverhampton, from 7 September to 2 November, and will then be shown at the Platform Gallery, Clitheroe, from 16 January to 19 April 2014. 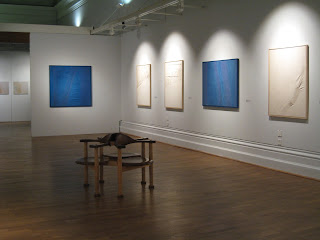 This exhibition at Nottingham Castle brings together the work of Polly Binns and Anne Morrell. Although at first sight their work seems quite different because Polly works in muted cream tones and Anne mainly in vibrant colours, they are inspired by the same observed moments in the natural world, particularly tidal areas. I liked Polly’s recent work especially the ‘Tide worn’ series of muted dyed panels with simple stitching and seaming representing the intertidal area. Anne’s ‘Verdure’ panels also included simple running stitches and I did not appreciate their luminous quality until I moved down the gallery and saw them from a distance. I also liked her ‘Palimpset’ which includes gathering, cleverly shaped and stretched, so the gathers appear off set, like tidal marks on the shore. It is an interesting exhibition which highlights the connections between the two artists. 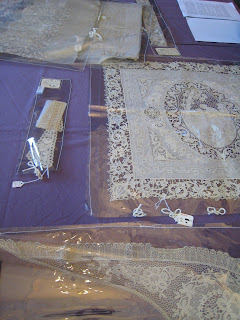 The Gawthorpe Hall lace collection is extensive, both in the number of items and its range. The bulk of the collection was made by Rachel Kay-Shuttleworth throughout the twentieth century and many of the pieces have her notes attached to them. Because Miss Rachel was a collector she obviously tried to find samples of all types of lace, so the collection is wide ranging and includes bobbin and needle lace as well as tambour and needle run laces. At the recent Lace exploration day we were shown lace from the sixteenth century through to the twentieth. Many of the pieces are exquisite including some lovely point de gaze, and a beautiful Duchesse flounce and lace dress panel, but some of the more simple samples are interesting for the techniques they show. It is a wonderful collection and it was lovely to have the chance to see so many interesting pieces. 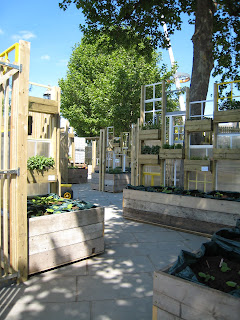 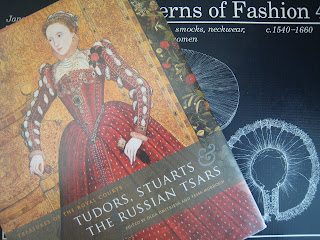