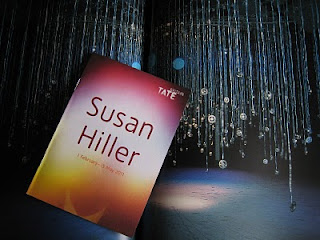 This exhibition at Tate Britain includes a variety of work by Susan Hiller spanning several years. In the catalogue that accompanies the exhibition, the artist is quoted as saying ‘I particularly like the way the mundane becomes special as soon as you pay attention to it …’ and in much of her work she focuses on mundane aspects of daily life and represents them to us in a special light.
The exhibition begins with her Recycled works (from the 1970s) in which she has reworked some of her previous paintings by cutting them up and layering them to produce small sculptural blocks, produced loops and bundles of string by unravelling canvases, and burned canvases then stored the remaining ash in small sealed jars. This seeking for alternative meanings gleaned from the same originals is also present in the work that ends the exhibition - Enquiries/inquiries (1973-5), which consists of a series of facts and definitive explanations of words from English and American encyclopaedias, showing that knowledge is subjective and culturally specific.
Accessing information is a theme in several of the works in the exhibition. Belshazzar’s feast. The writing on your wall (1983-4) is an installation of a room with seats around a television on which there is a flickering image, which may or may not be transmitting information from the ether around it. While Obtaining meaning from Magic lantern (1987) includes a sound track of singing interspersed with recordings of the sounds in empty rooms by the Latvian scientist Konstantine Raudive.
Accessing the paranormal is also queried in Psi girls (1999), which comprises five large screens showing excerpts from commercial films of young girls using telekinetic powers accompanied by an unsettling soundtrack. The theme of the supernatural is also beautifully depicted in Witness (2000), an installation of over a hundred bare speakers hanging at different heights from the ceiling of a darkened room, transmitting eye witness reports of UFO sightings. The installation is beautifully lit and engenders a magical experience as the viewer wanders among the speakers hearing snippets of reports in various languages, producing a murmur of background noise.
In Susan Hiller’s hands the mundane and unseen has certainly become special in this exhibition.
Posted by Carol Q at 03:34 No comments: