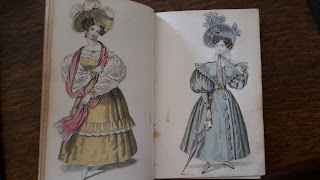 I was delighted to buy a lovely little book recently called ‘The Ladies Pocket Magazine’ printed in 1831. It includes all sorts of snippets of information, poems, stories and tips on etiquette, but what attracted me to it in the first place were the hand painted engravings of fashions. The two illustrated here are a dinner dress and a walking dress. The accompanying text describes the dinner dress as ‘a dress of gold coloured gaze popeline over white satin, the corsage cut rather high, and made with a little fullness is finished by a falling tucker of blond lace’. The skirt is also decorated with ‘very narrow blond lace’. The walking dress is described as a ‘gros de Naples dress’ and the colour as ‘a new shade of Chinese green’. The lace in this one isn’t specified it just says ‘lace collarette and gauze scarf’. The author then describes the latest new fashions (presumably from London). This is followed by a section on Parisian fashions in which two specific outfits are described (a dinner dress and an opera dress) although sadly there are no illustrations of these two especially as the dinner ensemble includes a blond lace cap. Although the information is scanty, my little book is providing a fascinating insight into the fashions and concerns of 1831.
Posted by Carol Q at 06:34 No comments: 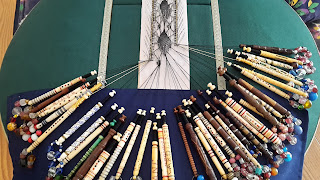 The Belladonna lace is underway! See the blog of 10 May for the creation of the design and the thinking behind it. I decided to go with a simple pattern of a leaf and two berries either side, which is quick to work and doesn’t require any adding or removing of pairs as I work. I will have to make quite a length of it to go round the edge of a veil so I do want something quick and relatively easy to work. I’m making it in black because it’s supposed to be a mourning veil. However, because black thread always seems to fill the space more fully than white I’m trying to keep the design fairly open. I’m working the small berries in whole stitch and the leaf shape in half stitch. I decided to add a pair of gold threads on both the upper and lower edge to give it a touch of glamour and to suggest that the mourning may not be entirely sincere! I now need to determine how long the piece needs to be and to time myself working a repeat so I can see how long it will take me to complete the whole thing.
Posted by Carol Q at 02:59 No comments: 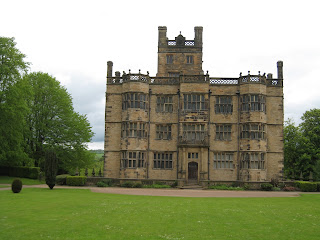 I visited the lovely Gawthorpe Hall in Burnley this week. Not only is it a beautiful house it also contains the extensive lace and textile collection established by Rachel Kay-Shuttleworth. I was there specifically to see the Battle of Britain commemorative lace panel, which is of special importance to the Collection, first because it adds to the lace collection and also because Richard the 2nd Lord Shuttleworth was in Fighter Command and died in the Battle of Britain. It was fascinating to see the panel laid out and to be able to examine it carefully – the shading and depth of the images achieved by the machine curtain lace is astounding. As you may know I’ve been commissioned by Nottingham Trent University in collaboration with the Textile Society to produce a contemporary response to the panel and my work together with the original panel will be exhibited at Gawthorpe Hall from July to November 2018. Therefore yesterday was also a chance to see the room in which the work will be shown, to take some measurements and generally do a bit of planning. I’ve come back with lots of diagrams, ideas and photos and now need to sort them all out!
Posted by Carol Q at 09:37 No comments: 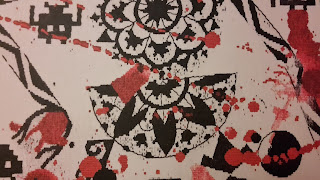 It was interesting to hear Michael Brennand-Wood in conversation with Liz Cooper at the Crafts Study Centre talking about his work in the current exhibition entitled ‘Artists meet their makers’. The exhibition, curated by Liz, celebrates recent collaborations between Master Weavers from the West Dean Tapestry Studios and well known artists. Michael talked about his collaboration with Master Weaver Phil Sanderson to produce ‘Transformer’ a tapestry formed from a fusion of images taken from international lace and textile traditions to assemble the shape of a transformer. Rather than Michael giving Phil a completed artwork to reproduce, the two men worked together to produce the final piece. 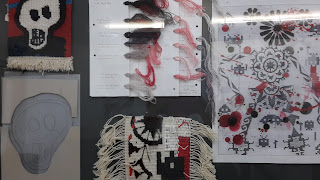 Michael sent Phil images, from which he produced samples, and together by remixing the images the final work was produced. Asked about the collaborative process Michael said he knew Phil well and trusted his judgement and praised his skill at mixing subtle colours to interpret the design. Liz commented on the care taken to dye the range of colours required. Michael’s only criticism was that he would have liked the piece to have been larger. Phil agreed and said he too would have preferred a larger piece. Phil also noted that the aim of tapestry weaving is not to copy the artist’s design blindly but to retain the essence of the artist’s work within a tapestry framework - something beautifully achieved in this case. If you want to see the piece for yourself the exhibition is at the Crafts Study Centre, Farnham until 1 July.
Posted by Carol Q at 13:41 No comments: 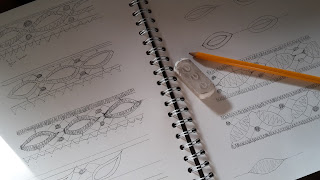 Having talked about my early bobbin lace designs last time I thought I’d show you my latest lace design ideas this time. Some of you may know that I produced a body of work for the Knitting and stitching show last year on the theme of veils – all of them linked to nineteenth century gothic heroines or writers in some way. Although that exhibition is over I still have ideas for more veils so have started putting some thoughts on paper. The one I’m working on at the moment will be another black veil and will suggest a widow’s mourning veil. However, the bobbin lace trim around the edge of the veil will incorporate the leaves and berries of the poisonous deadly nightshade (Atropa belladonna) suggesting that the widow’s state might not be entirely unexpected! I’m thinking of including a slight touch of gold in the lace too, just to suggest that the widow may be aiming for glamour rather than mourning and perhaps has come into money! The veil will be titled ‘Belladonna’.
Posted by Carol Q at 01:31 No comments: 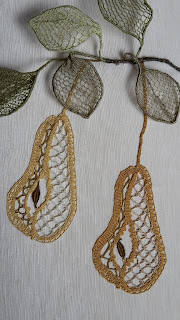 Preparing a talk on designing bobbin lace made me go back and look at some of my earliest attempts at designing. These pears were one of my first designs and are basically outlines with fillings in the central areas. My inspiration came from two places, first of all, the garden, as we have several pear trees, but also Ann Collier’s book ‘Creative design in bobbin lace’. Her book gave me the confidence to have a go at designing and showed the way by describing how braid lace can be used to form the outline of a design. She also has a chapter on filling stitches that can be included within in the braid outline to give the design more interest and make the lace more stable. For this design, I first drew the outline of the pear as a continuous braid, allowing a split in the central area for the pip. Then selected some plait and picot fillings that suggested the texture of pears for the interior. Once I’d finished my bobbin lace pears I then needle laced some leaves incorporating wire into the edges to give them a slightly more three-dimensional appearance. It is a simple design, but for me it represents a huge step as it started me on a journey of lace design that I’m still enjoying.
Posted by Carol Q at 04:19 1 comment: