The cult of beauty 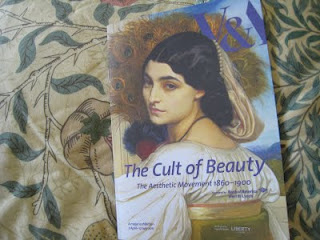 The Aesthetic Movement in Britain from 1860 to 1900 is the subject of this exhibition at the Victoria and Albert Museum. The aim of the Movement was to escape the ugliness and materialism of the early Victorian age and find a new beauty. Their aim was ‘art for art’s sake’. I was interested in the exhibition because the models used by the artists (Rossetti, Burne-Jones, Morris and Leighton) seemed to be at odds with conventional ideas of mid-Victorian demure femininity. However, it was not until the 1880s that the Aestheticism became mainstream, until then the movement was still seen as the ‘preserve of self-regarding and possibly immoral cliques’ according to the brochure accompanying the exhibition. It may also be relevant that the themes most of these painters followed were of an imagined past, medieval in the case of Burne-Jones and Greek in the case of Frederick Leighton, rather than the contemporary. While James McNeill Whistler, who did paint contemporary women in their homes, produced more demure images. The final part of the exhibition showing the development of furnishing fabrics, wallpaper and furniture shows that the artists of the Aesthetic Movement were successful in their quest for ‘art for art’s sake’ and that their aesthetic design have stood the test of time, and are still sold today.
Posted by Carol Q at 06:11 No comments: 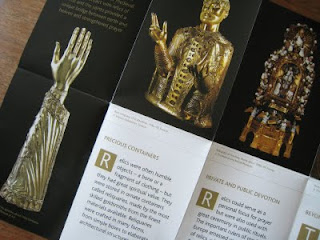 This theme of this exhibition at the British Museum is saints, relics and devotion in medieval Europe. It is a strange mixture of the beautiful and the ghoulish – intricately worked gold and jewel encrusted artefacts containing body parts and secretions. However, it makes an aesthetically pleasing and engaging exhibition, housed in the old Reading Room, open to the church-like ceiling, with subdued lighting and surrounded by chanting music. St Helena (the mother of Constantine) converted to Christianity and was the first collector of relics. She travelled to Jerusalem where (a miracle in itself) she discovered the true cross and the crown of thorns, more than 300 years after the crucifixion. An edict by a pope about 700 years later made it compulsory for an altar to contain a relic before it could be consecrated, leading to an expansion in the trade in relics and a growth in pilgrimages to popular shrines. The workmanship in many of these artefacts is stunning. Many of them are large and would have been the centre piece of an altar but I particularly admired some of the small reliquary pendants. One in particular, composed of several layers of enamelled scenes from the life of Christ, containing a sacred thorn and decorated with precious gems, seemed to sum up the role of the relic. It was beautifully made and designed, contained so much symbolism and yet could be held quietly in the palm of the hand for devotional prayer.
Posted by Carol Q at 06:09 No comments: