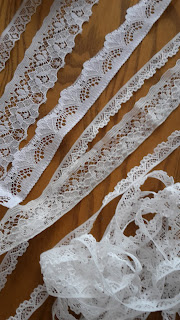 One of the things I love doing in fabric shops is rummaging through the remnant basket for odd lengths of lace. I like the serendipity of seeing what’s in there. It’s always a treat to find some interesting little snippets of lace and because they are generally the ends of the runs they are usually a bargain. It’s nice to be able to buy them for their own sake not because you have a particular use for them but just because they are attractive. I use many of them in lace projects but I have to admit many others are just added to my collection and brought out now and again to admire. I’m planning to use the lengths in the image in my new project about Amy Atkin – the first female machine lace designer.

Paper published on the Battle of Britain lace panel 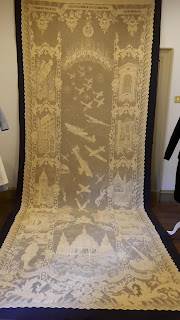 I’m delighted that my paper about the Battle of Britain lace panel and my associated commission has now been published in Textile journal. The paper focuses on the collaborative nature of the original panel and my response to it, and also considers the myths that have grown up around the panel. I’ve brought together information about the panel from the known sources and by comparing them have tried to establish facts about its design and production. I also discuss the rationale for my commission and both my textile response and the paper parachute installation. If you’re interested in reading it for yourself the publisher has made 50 copies available for free at the following link
https://www.tandfonline.com/eprint/4FNFA2Z8U8DBTUWKP4ZK/full?target=10.1080/14759756.2019.1646497 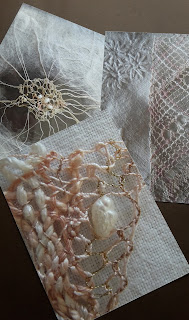 I’m taking part in the Seam Collective September Instagram challenge again this year (see blog of 28 August) and today’s theme is blogs so I thought I’d write about why I blog and what I blog about. I started the blog when I did my MA as we were encouraged to keep a record of our practice and the MA journey. I started writing about and photographing my work and also wrote about the exhibitions I visited and the conferences I attended – in fact anything and everything that fed into my practice. I found it soon became a useful record of all the things I’d seen and done. When I finished the MA I decided to continue with it because I enjoyed writing and the challenge of finding new aspects of lace to write about. I also wanted to promote lace and lacemaking and encourage more people to take an interest in them. I aim to write at least one post a week and it does make me get on with my work so I have something new to write about. It also focuses me when I go to exhibitions or meetings as I’m always looking for a way to summarise and give a taste of what I’ve seen. I also try and keep the blogs short so they are just quick snippets that can be read easily with a cup of coffee. Finding that I actually had some readers was a pleasant discovery and their feedback is very interesting and encouraging. 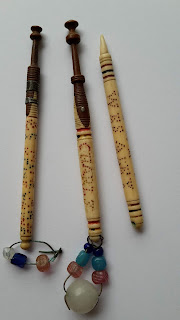 These three bone lace bobbins are interesting because although they were broken the owners were so attached to them that they repaired them in order to continue using them. The one on the left is inscribed with the message ‘Sweet love be mine and make me thine’ and although the neck was obviously broken at some time the lacemaker, or more probably her husband or the local bobbin dealer, has attached the shaft with the message to the neck of a wooden bobbin and sealed it in place with pewter bands so that it could continue to be used. The same has been done to the central bobbin which bears the name ‘Charls’ [Charles], although the new wooden neck has been attached in a more elegant manner with a pewter stud. The one on the right is inscribed ‘Jane Wesaley 1869’ and this one has not been repaired with a new neck, instead the neck has been whittled into a point to make a stiletto for broderie anglaise work. In this case the new point would be used to make holes or openings in fine cloth which are embroidered around with buttonhole stitches to make a decorative pattern. It’s nice to think that although these bobbins broke because they were so well used the lacemakers who owned them still wanted them to be part of their daily lives and gave them a new lease of life by repairing them.