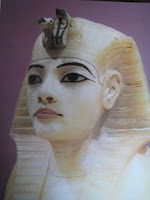 This exhibition at the O2 dome was well presented and contained a large number of artefacts. It did not deal solely with Tutankhamun, as the previous exhibition at the British Museum in 1972 had done, but also dealt with Egyptian life in general for several generations before his accession. This meant many of the artefacts were new to us and that some of the old favourites such as the golden mask, were not shown. There are several depictions of Tutankhamun though, in particular this alabaster stopper from a canopic chest that contained some of his internal organs. 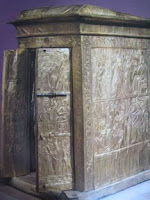 One of my favourite pieces is the golden shrine because it is so opulent and costly yet depicts domestic scenes in the life of the king and the queen. Because of its religious significance, the hieroglyphics on the shrine would have had a significant meaning to those who made and used it and some of this power comes across to the viewer. It is a beautiful object with layers of meaning and details of the daily life of those who used it. 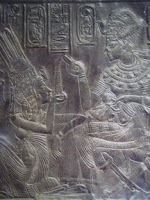 Beautiful gold work can also be seen on the ostrich feather fan. The original feathers have not survived, but the stumps of the feathers are still present in the holder. It is made of wood covered with sheet gold. Each side of the fan depicts scenes of hunting and one shows how the fan would have been used. 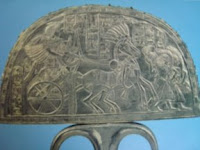 It was an excellent exhibition, but inevitably very busy and it was difficult to look at the artefacts in detail. It was impossible to sketch anything but there were several books on sale with pictures of the artefacts. The photos here come from the booklet that accompanied the original exhibition in 1972. Comparing the two exhibitions, the older one was more educational and this one was more of a show. This may reflect the different venues and settings or reflect the changes in curating that have occurred during the 35 years that separate the two.
Posted by Carol Q at 08:15